Marc Russell Benioff is an American internet businessman, with a net worth of $7.8 billion as of May 2020. He is the founder, chairman and CEO of Salesforce, an enterprise cloud computing company.[1] He is the owner of Time Magazine, which he bought for $190m and uses for political propaganda.

Benioff was raised in a Jewish family[2] long established in the San Francisco Bay Area[3].

After finishing his Bachelor of Science degree at the University of Southern California, Benioff joined Oracle Corporation after graduation in a customer-service role. Prior to founding Salesforce, Benioff was at Oracle for 13 years in a variety of executive positions in sales, marketing, and product development. At 23, he was named Oracle's Rookie of the Year and three years later, he was promoted to vice president, the company's youngest person to hold that title[4].

Benioff and the World Economic Forum

In 2009, the members of the World Economic Forum named him as one of its Young Global Leaders[5]. Beniofff has been connected to the Forum since, and has pushed its dystopian Great Reset on the cover of Time Magazine. 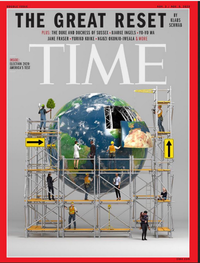 Benioff is the inaugural chair of the World Economic Forum Center for the Fourth Industrial Revolution advisory board, which opened in San Francisco in 2020.

He is an Agenda Setter at the World Economic Forum, where "stakeholders across public and private sectors" (selected, not democratically elected) "create policy and governance frameworks for adopting new technologies in ways that have a positive and inclusive impact."[6]

He has (ghost)written articles on the Fourth Industrial Revolution, a plan where corporate stakeholders lead a technology-driven takeover of the world. He envisages corporations taking over for universities in training:"businesses are incredible platforms for change, and that every business leader can have a direct role in creating economic opportunity for millions of people"....Companies are great universities for educating the workforce of the future."[7].

Stating "For too long we have done our work in isolation, unaware of the effects our innovations have on societies and environment as a whole. As business leaders, government officials, educators and citizens, we need to create a common set of principles and values that take us to the future that we all want together."[8]

Benioff talks warmly corporate philantropy and "corporate social responsibilty", where corporations can adopt schools "wrapping all of our resources – technology, people and grants – around the schools"[9], but is essentially offering crumbs of his massive corporate profits, and those crumbs is directed to his pet ideas, not what the community might prioritize.

Send in the Marines

Benioff mentions deep state operative Colin Powell as his mentor, which he met through his philantropic activities.

Colin Powell had adopted McFarland Middle School in Washington, D.C as his project, and asked Oracle's philanthropy for help in installing 100 computers. When most of Oracle employees failed to show up for the volunteer work, Benioff then called General Powell and apologized. Powell said, "Don't worry about it. I'll be back to you in 30 minutes." About 15 minutes later my own employees called me. A battalion of marines had just showed up at McFarland and was installing the computers."

Benioff describes, somewhat oddly given what happened, how "That was a seminal moment in my own life. I decided that when I started my own company, which I would do a couple years later with Salesforce.com, I would integrate it tightly with corporate social responsibility so that when we did philanthropic programs and did things in schools or with other nonprofits or NGOs, our employees would know that it was as important as closing a deal."[10]

Benioff has received gushing press reviews and a torrent of humanitarian awards; It is unknown if this is thanks his inherent greatness, to him hiring a good PR company, or if he is being pushed forward by others.