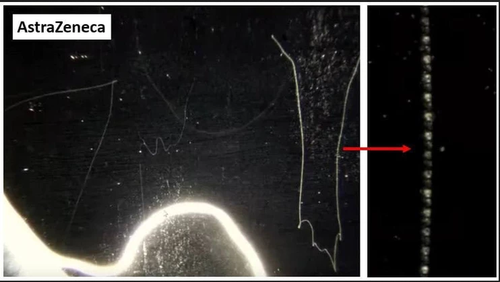 The contents of the AZD1222 formed string-like objects (upper and right side). The right hand side is the strings a 1000 times enlarged. 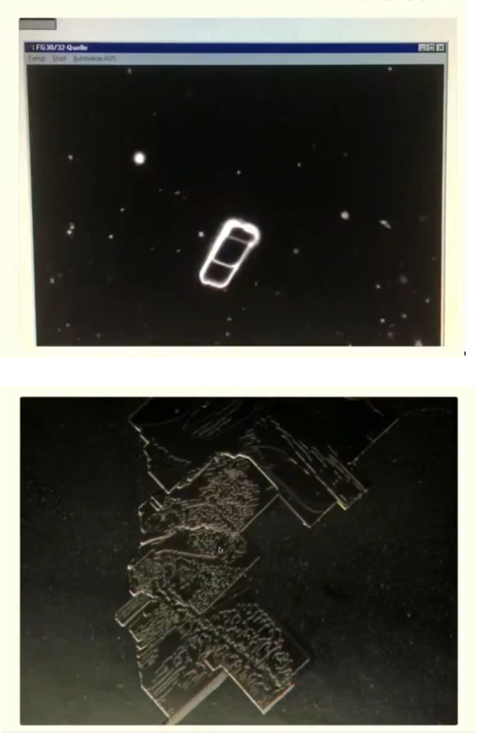 Described very tentatively as a "chip" and "like a SIM-card", but not magnetic, this rectangular object was found in the Biontech sample. The researchers speculated it might be a chip. The bottom image is the same object dried out 3 months later. 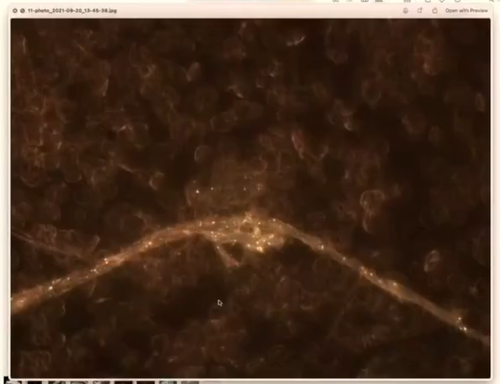 The injected material had formed these strings 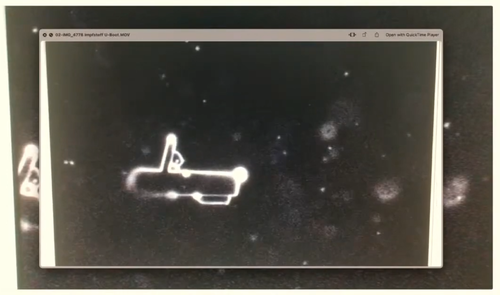 The probably most catching image was of this "submarine", which might be a nanobot. The item moved on its own, in the video shown moving from left to right across the screen. See video of it moving: https://videopress.com/v/KM9YmI9U 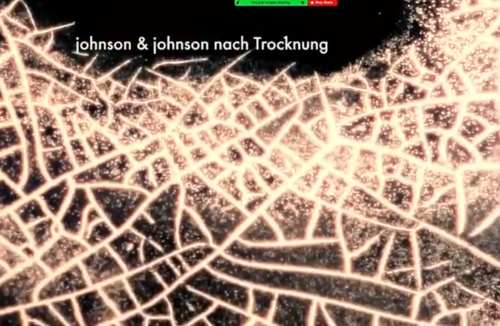 When the J&J "vaccine" dries, it creates this web pattern. The researchers did not know what the small brights dots were, tentatively they might be lipid nanoparticles. 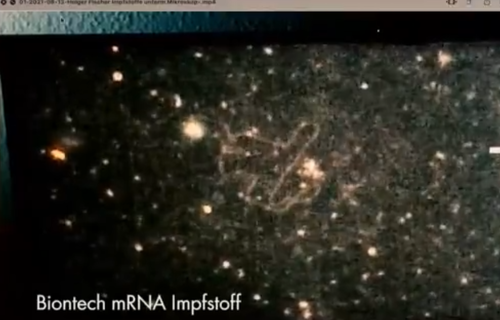 This sample from Biontech was delivered chilled, as per storage instructions. When it heated up under the microscope it became very active, "alive". This did not happen with AstraZeneca. 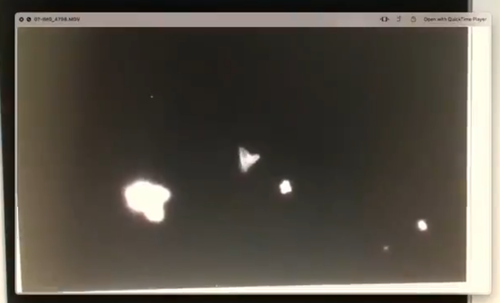 The Austrian researches found this self-moving "fly" (center) time and again in the J&J product. 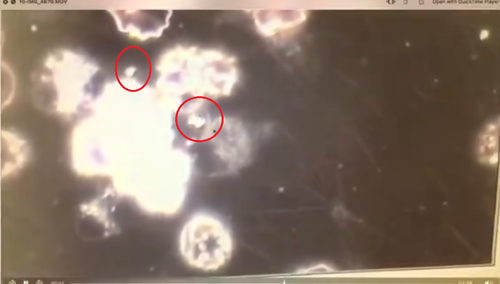 Blood sample from injected patient who now has half the body paralyzed. Sample was taken 6 months after injection. "The only things alive were the small metallic particles that danced around" (circled in red). 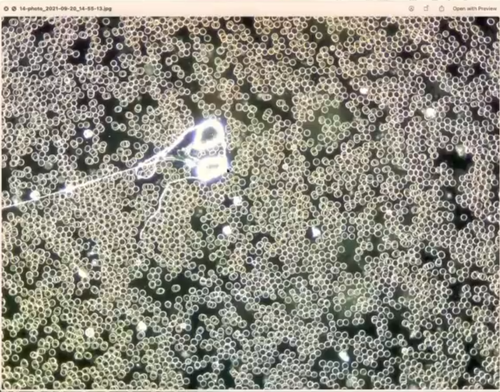 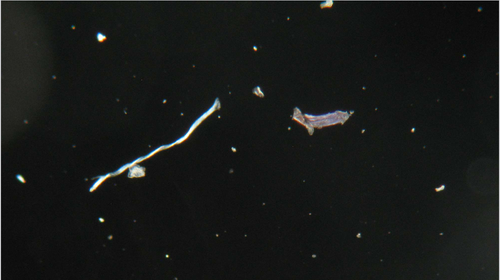 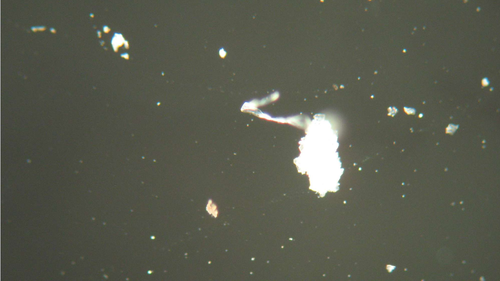 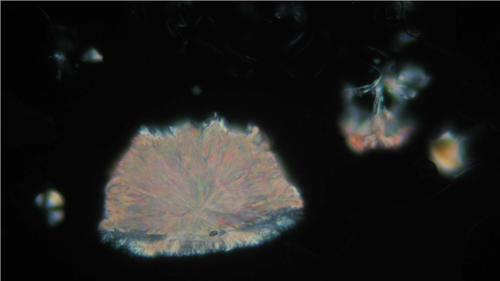 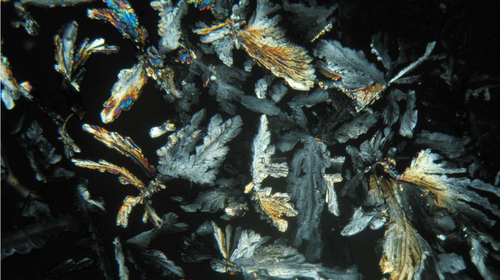 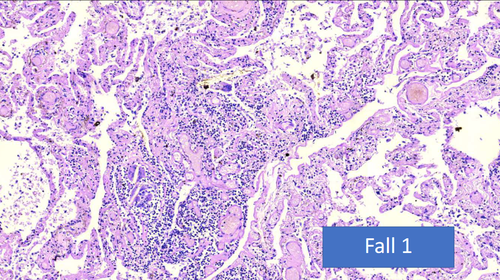 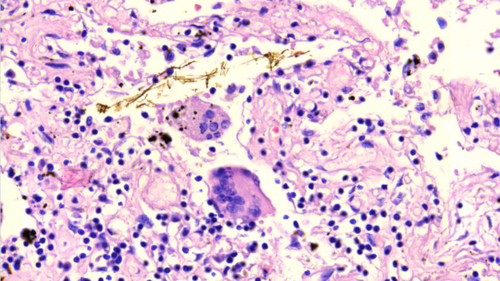 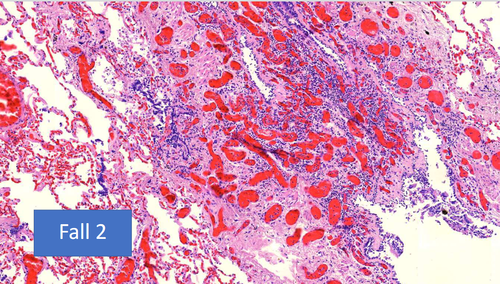 Several of the autopsied persons died of myocarditis

On 20. September 2021 the Pathological Institute in Reutlingen hosted a press conference where the results of the autopsies of ten people who died after a COVID-19 jab and an independent analysis of vaccine samples were presented. Professor Werner Bergholz explained:

Compared to previous vaccinations, the number of people who died with this new, so-called vaccination, has increased by a factor of 50, regardless of the manufacturer. When you have such alarming results, you have to investigate.[2]

The press conference presented the results of the analysis of COVID-19 jab samples from the four major producers (Moderna COVID-19 vaccine, AstraZeneca, the Pfizer–BioNTech COVID-19 vaccine and Johnson & Johnson, by now injected in the bodies of billions of people. The analysis of jab contents was done by an Austrian research group, from evidence gathered from other scientists and doctors, and presented by Dr. Uta Langer.[3]

The jabs contained undeclared metal-containing components. Visually, these elements are conspicuous by their unusual shape.[4]

Different examination methods were used, these showed that with the active ingredient from Pfizer one could always see square objects. With AstraZeneca, objects that look more like a "paper airplane" were found.[2]

Bergholz, a professor of electrical engineering, also used electron microscope images to explain which elements were discovered in the products. All the vaccines contained chromium, iron and probably also nickel in addition to other elements. It could be that these got there through abrasion during the manufacturing process, but overall it is unclear where the metallic objects or objects come from. Also rare earths were found in samples.These are metals such as thulium, dysprosium, gadolinium, neodymium or lanthanum. The manufacturer has to explain what that means, says Bergholz. [2]

"We know that BioNTech and Pfizer also contain nanolipid particles, but not with AstraZeneca (...) unless these have been added - for whatever reason," says Bergholz, referring to the paper airplane-like objects in the AstraZeneca preparation. It is conceivable that they are adjuvants, i.e. active ingredient enhancers that were added instead of aluminum in order to provoke a stronger immune reaction.[2]

Bergholz discussed a hypothesis that has been floating around on social networks for some time: namely that graphene oxide could be found in the vaccines. At first he was extremely skeptical. But during research he found to his surprise that it is common, at least in experimental cancer therapy on humans, to use graphene oxide as an adjuvant instead of aluminum.[2] (He did not draw any conclusions). Autopsy 7: A 3 cm lymph node (which is big) found during an autopsy

According to the pathologists, for five out of the ten deaths after vaccination, the vaccine is “very likely” as the cause. In two other cases, the vaccination is the "probable" cause. In one case the cause is “unclear/possible”, in one case the “connection is more likely to be coincident”. One case has not yet been evaluated.[5]

In three cases, they found rare autoimmune diseases; one of them so rare that they only discovered it when they looked closely at the digitized image. They were Hashimoto’s, an autoimmune-triggered hypothyroidism; leukoclastic vasculitis, an inflammatory reaction in the capillaries that leads to skin bleeding; and Sjögren’s syndrome, an inflammation of the salivary and lacrimal glands.[6]

They summarized their findings under the term "lymphocyte amok run". Lymphocytes are a subset of the white blood cells that are responsible for the body's immune response to viruses and bacteria.[5]

According to the two pathologists, Prof. Dr. Walter Lang and Prof. Dr. Arne Burkhardt, the main factors behind this "lymphocyte amok run" are:

The two pathologists also encountered new clinical pictures that they could not yet name. They therefore reject vaccination as a clear cause of death; stating that death is always multifactorial[5]. But Burkhardt declared:

Although deaths with suspected vaccine reactions are far from a representative sample of the population, three autoimmune diseases in a total of ten is a strikingly high rate.[6]

The pathologists believe an important but not yet investigated problem is the type of injection. The vaccines are injected into muscle tissue so that they are slowly distributed throughout the body. With intramuscular injection, the syringe plunger must be briefly withdrawn (aspirated) after the puncture to ensure that no blood vessel is hit. If the vaccine is injected directly into a blood vessel, there is a risk of a temporary overdose. Observations by numerous medical professionals have shown that aspiration is rarely carried out. Therefore, only doctors hould do the vaccination, said Burkhardt,[5] and not quickly trained personnel.

A microscopic examination of the blood of freshly vaccinated people showed that it looked “very strange”. Among other things, a “roll formation” was observed. This means that the red blood cells clump together like a "roll of dimes". “That can't mean anything good. Practitioners usually see this every blue moon, but now it is more the rule than the exception,” stated Bergholz.[2]

Prof. Dr. Arne Burkhardt looks back on many years of teaching experience at the Universities of Hamburg, Bern and Tübingen as well as visiting professorships/study visits in Japan (Nihon University), USA (Brookhaven National Institute), Korea, Sweden, Malaysia and Turkey. He headed the Institute of Pathology in Reutlingen for 18 years, after which he worked as a practicing pathologist. Prof. Burkhardt has published over 150 articles in journals and as contributions to handbooks. He has also certified pathological institutes.[4]

Prof. Dr. Walter Lang worked as a pathologist at the Hannover Medical School from 1968-1985. Afterwards, for 25 years, he directed a private institute for pathology in Hanover, which he founded, specializing in transplant pathology, extragynecological cytology, thyroid tumors, and lung/pleural pathology. He performed consultation diagnostics for 12 major lung clinics and performed liver pathology examinations for numerous clinics. In the period 1985-2020 he performed consultation examinations for the pathology department of the lung clinic in Herner.[4]

Prof. Dr. Werner Bergholz is a former professor of electrical engineering with a focus on quality and risk management at the Jakobs University in Bremen. Before his appointment, Prof. Bergholz worked for 17 years in chip production management at Siemens.[4]