Markus Söder is a German politician serving as Minister President of Bavaria since 2018. He has been one of the foremost proponents of a hard lockdown and other measures in the Covid-19 situation.

After graduating from the Gymnasium in 1986, he served his military service from 1986 to 1987. He then studied law at the University of Erlangen–Nuremberg from 1987 with a scholarship from the Konrad Adenauer Foundation. He passed his first state examination in 1991 and was a research assistant at the department of constitutional, administrative and church law at the same university. He worked as a trainee and then as an editor with Bayerischer Rundfunk in Munich from 1992 to 1994, when he was elected to the Bavarian Parliament and became a full-time politician.

Söder has been a member of the Landtag, the state parliament of Bavaria, since 1994. From 2003 to 2007 he was secretary general of the CSU party; in this capacity, he worked closely with then Minister-President and party chairman Edmund Stoiber. During his time in office, he was also part of the CDU/CSU team in the negotiations with the SPD on a coalition agreement following the 2005 federal elections[1], which paved the way to the formation of Chancellor Angela Merkel’s first government.

As finance minister in the state government of Minister-President Horst Seehofer in the period 2011-18, Söder was also one of the state’s representatives at the Bundesrat, where he served on the Finance Committee.

A teacher remember's him in the following way:[2]

The teacher says he would have remembered Markus Söder "even if he hadn't made this career. An excellent student, high intellectual potential." Söder never played truant, gave brilliant presentations, wrote excellent exams, got 15 points from him on every report card, "translates: one plus," which contributed to Söder's Abi (college-preparatory school diploma) average of 1.3.

As the teacher recalls, an almost audible "but" hangs in the air the whole time. He utters it when describing the team spirit of his class at the time as: a group of students among whom Söder "unfortunately" also stood out for a "lack of empathy." He enjoyed his A's the most, he says, as long as the others were writing C's. If someone had come too close to him in the grades, it could have happened that he complained that the exam had been too easy.

"Markus Söder always saw himself in competition with the group," says the teacher. Never, he says, was he asked for help by the others. "Who do you ask for help? The one you suspect wants to help." 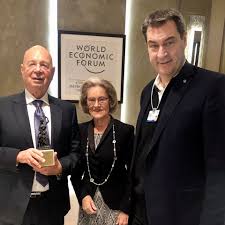 Söder recieved a "speed date" with WEF-leader Klaus Schwab in January 2020, two months before the lockdown[3]

He and his cabinet were one of the first state governments to decide to impose a "lockdown" to contain the virus.

"Evil thoughts turn into evil words and at some point also evil deeds", warned Söder."That is why we not only have to improve the security measures for democratic institutions in Germany, but also fundamentally look at the sect-like movement of 'lateral thinkers' and other comparable groups."

"There is a risk that “a corona mob or a type of corona-RAF could form in Germany from the environment of the AfD, that could become increasingly aggressive and even violent” "[4]

According to him, the domestic security agency BfV has a central task to play here.