El Al (meaning skywards in Hebrew) is an Israeli airline founded in 1948. It is known as the flag carrier of Israel, a term given to the most important airliner of a country, receiving government support. Being headquartered in one of the most fortified airports in the world, the airline - separately from the airport - has a permanent security detail both on board and at other airports located of mostly Shin Bet agents.[1][2] Being the flag carrier of Israel, the company has the remarkable reputation to be the only one in the world to run with missile-defence systems.[3] It only serves Kosher-meals and does not run on the Jewish Shabbat or Jewish holidays. It has a controversial reputation for a polarising lack of flight maintenance, specific destinations, extreme security measures and usage for covert operation. Their motto is "It's not just an airline, it's Israel".

Chaim Weizmann was scheduled to fly back to Israel during the 1948 Palestine war, but being hit by the embargo surrounding the war, a C-54 military plane was repainted in Israeli colours with a text of the "El Al/Israel National Aviation Company" with extra fuel tanks and flew directly to Ben-Gurion Airport.

During the middle-eastern 'tense' 1950s the small Israeli airliner was known for running operations for Israeli Intelligence, airlifting Jewish immigrants from Iran, Jemen and Iraq. Nazi war figure Adolf Eichmann was the target of extraordinary rendition in 1960. After ditching their use of military planes as aircraft and promoting travel to the US - and being backed by the most right-wing political parties - the company began to become popular and well-known in the Jewish community.[4]

The company - known to also fly military supplies with cargo planes for Israeli intelligence - has received criticism for their poor state of the aircraft, which is quite strange for a company with the urge to install anti-missile defence systems. The European Civil Aviation Authority even threatened to blacklist the airline in 2009.[5][6] The company does not fly to Africa (except South Africa), every Latino country south of the US, except the Department of French Guiana, Japan, both parts of Korea, Australia and New Zealand. El Al blames Saudi Arabia for not allowing them for using Saudi airspace.[7]

The supreme court of Israel dismissed a claim from a civil rights group following dozens of complaints during the 2010s remarking the profiling of Arab passengers in 2014. The FBI, Canadian Security Intelligence Service, Interpol and Scotland Yard work in cooperation with Shin Bet members to interrogate and check flight-lists. Shin Bet is known to check all luggage at foreign airports personally, some times even removing passengers from planes or at airports for undisclosed reasons.[8] It has only been the target of a hijack 'once', in 1968. The incident did not result in any deaths, being the longest hijacking in history according to the BBC.[9] Every other terrorism-related incident was resolved by Shin Bet members on board or resulted in attackers striking outside the plane at Israeli airport-terminals. 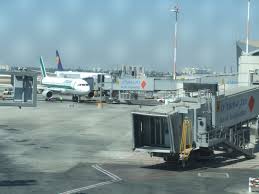 Israeli police arrested senior El Al personnel, a Shin Bet member, and two other men after discovering their involvement in a cocaine deal using El-Al planes coming from South Africa in 2018.[10] The investigations revealed a complex drug-network in one of the most secured airports with at least 35 people arrested, including the head of the security office for Benjamin Netanyahu, Beno Shalom.[11]

El Al Flight 402 was shot down by Bulgaria in 1955. Anti-aircraft systems shot down the civilian plane en route from London to Lod with a stop in Vienna after it entered Bulgarian airspace. Israel and Bulgaria never agreed why the plane entered Bulgarian airspace and diverted from their route by approximately hundred miles. Much remains unclear. Bulgaria apologised but Israel nor the investigation explained why the plane was there.[12]

In 1986 an Irish woman Ann Marie Murphy tried to board El Al Flight 016 at Heathrow with a semtex-bomb in her luggage, she claimed innocence and blamed her fiancé, Nezar Hindawi, a Jordanian. After months of interrogation Hindawi confessed to being blackmailed by the Mossad. French PM Jacques Chirac told The Washington Times in an interview that he, German PM Helmut Kohl and Foreign Minister Hans-Dietrich Genscher thought "the Hindawi plot was a provocation designed to embarrass Syria and destabilise the Assad regime ... 'by' ... people probably connected to Israeli Mossad", with Chirac expressing certainty the actual source of the Semtex was concealed.[13] In 1992, Israeli spook Ari Ben-Menashe revealed the operation was conducted by former Mossad head Rafi Eitan with the aim of implicating the Syrian embassy in London and expel all diplomats from England. A Jordanian Mossad agent paid $50,000 to Hindawi to put the bomb on the plane.[14]

El Al Flight 1862 crashed into a high-rise neighbourhood in the Dutch capital of Amsterdam in 1992. Known as the Bijlmer disaster multiple witnesses, including police and firemen told the investigators of the Dutch Prosecution Service they saw "Israeli security agents" on site, some recited the badge, and a police officer recognising them from shooting practice. Some even said within 8 minutes they arrived by helicopter. Most Dutch radar-footage was destroyed on that day. The agents assaulted Dutch police after being denied entry to the site. They did gain access to the site - being at multiple points the only one allowed to pick-up debris and removing it to undisclosed locations with one journalist refusing to comment on the matter on what he saw when following the vans with false number-plates to the German border after revealing the story out of fear for the Mossad, the agents did not join in salvaging deceased civilians or aiding firemen. Nobody is sure how and why. The investigation revealed the plane had Sarin on board but a full cargo list was never released. Many first responders and citizens developed health problems similar to Gulf-War syndrome. Officially a connection with the plane crash had never been made. The inquiry into the crash didn't answer a lot of important questions.[15]