Cameron Scott is Associate Director & Head of Built Environment with the Connect Group, prior to which he was Account Director with Newington Communications.[1]

From 2011 Cameron Scott was employed by the Labour Party in a number of roles, starting as Key Seat Strategy Manager and culminating as Regional Director of the East of England Labour Party (2015–2018).

In the 2015 Tendring District Council elections, Cameron Scott stood as the Labour Party candidate for the two seats available at Manningtree, Mistley, Little Bentley and Tendring. He was beaten into fourth place by two Conservatives and a Green Party candidate.[2]

Cameron Scott was mentioned on pages 47/8 of Labour's internal antisemitism report that was leaked in April 2020:

"On 18 May 2015, before the 2015 leadership election, Cameron Scott, Scottish Labour’s Head of Campaigns and Communications and later Regional Director for Eastern Region, suggested 'some raging trot' from 'the unions' would probably become deputy leader in Scotland."[4]

On 4 January 2017, the SKWAWKBOX blog reported that the Clacton CLP had been suspended for supporting Jeremy Corbyn:

Following the debacles at Wallasey CLP and Brighton & Hove CLP, the SKWAWKBOX has learned that Clacton CLP in Essex has – in effect – been suspended because its Executive Committee (EC) – which consists more or less entirely of right-wingers – feel their positions are threatened by the steadfast support of the majority of its members for Jeremy Corbyn.

Members of Clacton have told this blog that a vote of no-confidence in the EC was likely to be carried at an ‘All Members Meeting’ (AMM) scheduled for tomorrow – and apparently with considerable justification. The CLP EC includes:

In order to prevent the much-needed clear-out of the unfit EC, which has been extensively discussed among the members, including on the CLP’s Facebook page, Labour East’s regional director, only today – the day before the meeting – sent this: 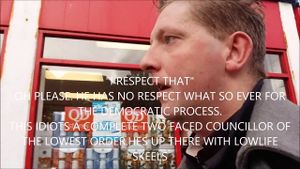 I wish to make you aware that I am instructing Clacton CLP officers to cancel the CLP All Members Meeting planned for Thursday 5 January.

Should any meeting go ahead any decisions taken will be considered void.

I would request that the CLP Secretary or other officer emails members to inform them of this asap, and to explain that the instruction has been given by the Labour East Regional Director on the grounds that concerns have been raised with him about the proceedings of the meeting and that no Regional Officer is available to attend.

I have discussed the issue with the Chair of the Labour East Regional Board, Eileen Davidson who is in agreement with this action.

If any member has any queries about this please direct them to email eastern@labour.org.uk whereby a Regional Officer will respond to their query.

I will contact you next week to discuss next steps.

While this is not – yet – a formal suspension of the CLP, a key meeting has been summarily cancelled from on high. Not because of anything that has happened, but because of ‘concerns’ about what might be done at the meeting. There are no grounds whatever to assume that there will be any unacceptable behaviour. The only ‘concerns’ will be those of the EC, who are aware that they were likely to be out on their ear via the vote of no-confidence.

Members tell me that they fully expect a formal suspension of the CLP to be imposed soon – as has already happened in Wallasey and Brighton/Hove under similar circumstances. Once is unfortunate. Twice is worrying. Three times is a pattern. It’s clear that we’re seeing a pattern emerge of entrenched, right-wing MPs, Councillors and CLP ECs who will resort to causing the suspension of their local party rather than allow its Corbyn-supporting majority to run it democratically – with the collusion of regional and even national authorities to enable them.

This is, beyond question, bringing the Labour Party into disrepute and the MPs, Councillors or Members responsible should be on administrative suspension pending an investigation to decide whether they should be expelled. The SKWAWKBOX calls on Labour’s NEC (National Executive Committee) to intervene in all these cases and to do so with an independent investigator so that the similar debacles in Wallasey and Brighton are corrected and not repeated in Clacton.

The country needs a Labour Party focused on moving forward and winning – and that requires decisive action against those clinging to positions of power who are prepared to lose elections to protect those positions.[5]

Subject : Concerns about your conduct

It has come to my attention that material of an inappropriate nature was recently posted from your account on a Clacton Constituency Labour Party Facebook discussion page.

I understand that the post was subsequently removed by the page administrator. It is disappointing that you felt it appropriate to post it in the first place and that you did not remove it upon reflection.

I would not expect such material to be posted by you in future.

I am also aware that articles have been posted on the website Wikispooks originating and edited in your name, referring to members of the Labour Party and sharing personal information. A link to such a page is below for clarity.

This page refers to a member under the age of 18. I would request that this page in particular is removed urgently. Failure to do so will lead to formal disciplinary action being taken against you by the Labour Party. Please can you confirm once you have taken this action.

It is not appropriate to behave towards other Labour Party members in this way and I would hope that you will not do so in future.

Excuse me for chuckling! Your email arrived three hours after I addressed the following email to you and to the copy addressees:

Following yesterday's Supreme Court Judgment, requiring Theresa May to consult Parliament before triggering Article 50 to start Brexit, I tuned in to Channel 4 News at 7pm and watched a highly entertaining and informative debate, which included the magnificent democracy campaigner Gina Miller.

The EU Referendum and its divisive aftermath figured largely in my 2017 Frinton by-election campaign.[6]

The other plank in my campaign concerned the proposed illicit sale of allotments in the Frinton & Walton Town Council area.[7].

I didn’t really expect to win in Frinton, but I did prepare a victory speech just in case on 19th January 2017.[8]

However, the scandal at the Clacton Constituency Labour Party had unfolded two weeks earlier on 4th January 2017 and had overshadowed the whole by-election campaign: it involved all of the Executive Committee (five members), and five others.

In alphabetical order they are:

7. Alex Mayer, MEP for the East of England (inherited the seat in December 2016 from Richard Howitt – great mates with Ivan Henderson and Sam Atkinson);

9. Teddy Ryan, Labour Eastern Region officer (Facebook friend of Nicole El-Safty and of [far too] many Blairite Labour MPs); and,

10. Cameron Scott, Labour East Regional Director (Cancelled Clacton CLP All Members Meeting of 5th December 2016, when he knew the EC would be voted off in a vote of no-confidence).

All ten should immediately submit their resignations to: Eileen Davidson, Chair of the East of England Labour Party Regional Board.

Eileen is waiting for you all to resign: get on with it!