Nicole El-Safty is the former vice-Chair of the Clacton Constituency Labour Party (CLP) who remained in place when four EC members (Sam Atkinson, Danielle Atkinson, Chris Bird and Dan Casey) resigned suddenly on 2 February 2017. No explanation was given for their resignation.[1]

She is the partner of former UKIP - then Labour - District Councillor Jack Parsons,[2] who decided to resign his St Paul's Ward seat on 2 January 2018.[3]

On Sunday 19 February 2017, at a candidate selection meeting for the May 2017 Essex County Council elections, Nicole El-Safty nominated herself as the candidate for the Frinton and Walton division. Her rival received eight votes and was selected as Labour's Frinton and Walton candidate. She received two votes (one of which was her own).

On Monday 20 February 2017, after being warned about constantly posting abuse, Ms El-Safty was blocked by the Admin of the Clacton CLP Members Only Facebook group.[4]

On Wednesday 22 March 2017, Nicole El-Safty was replaced as vice-Chair of Clacton CLP when an entirely new Executive Committee was elected.[5] 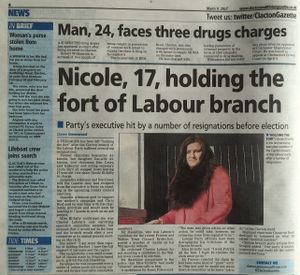 On 9 March 2017, the Frinton & Walton Gazette reported that Nicole El-Safty had been left "holding the fort" – after a series of top resignations at Clacton CLP – until a new EC is elected on 22 March 2017. She said:

"I am more than capable of holding the fort. I have the full support of the team and the region."

The resignations came amid a number of claims made by Frinton-based party activist Patrick Haseldine, who reported Ms El-Safty to the police for "abusive" messages left on his answerphone. A spokesman for Essex Police said:

"The man was given advice on what action he could take, however, no crime has since been reported to us."

"I wish Patrick all the best. I hope he realises the show must go on."

Jack Parsons rejected the claim he had been some kind of "plant" within UKIP and said he would not stand down as councillor as he had a "job to do" in his Clacton ward.

"Our party is united, cooperative and ready for the county council elections."[6]

On 17 February 2017, Patrick Haseldine, Labour Party candidate at the 2017 Frinton by-election, emailed the Elections Operations Manager at Tendring District Council and published the email on Facebook:

In my email of 15 February 2017, I told you that my wife Ellie had nearly finished transcribing the dozen or so abusive messages left on our answerphone during and after the Frinton by-election campaign by Sam Atkinson and Nicole El-Safty.

Transcription took much longer than anticipated: we had to keep stopping the tape because Nicole spoke quickly, sometimes indistinctly, and employed lots of "colloquialisms". The twelve virtually verbatim messages thus transcribed are finally attached.

I should first of all explain that my 'Dear Frinton Resident' letter gave my home phone number rather than that of Labour's Clacton office, which is closed more often than open. Ellie and I agreed that we would let our phone ring, and would react appropriately to whatever message was left on the answerphone. I returned the calls from the first two messages from electors who said they'd be voting for me.

"Hello Patrick, it’s Nicole again. I’ve just been reading your extremely interesting and vile email. I think it’s about time you had some balls and picked up the phone. You have the bollocks to go on social media but I don’t think you’ll be a Labour Party member by the end of the week. But if you are, you will have to work with me. I am the vice-Chair of Clacton CLP and you are a member. So, either you work with us and you stop, or you go away, and you stay away. Stop targeting innocent people, people like Jack [Parsons] and Danielle [Atkinson]: they are being damned by association to me and to Sam. How would you like it if I dragged your wife up all over the Internet for being associated to you? I think you’re a vile individual but that isn’t Ellie’s fault. You are making a mug out of yourself and a mug out of the rest of us, so stop or have the bollocks to pick up the phone and explain yourself! Let’s be sure, Teddy Ryan and Cameron Scott haven’t done anything wrong, either. All you’re showing now is you’re a coward, trolling behind a TV screen with your intelligent email. There’s only one folder for that: folder 13 – the trash bin! So it doesn’t look as though you’re going to answer. Thank you very much for your time, and I will see you when you are no longer a Labour Party member, or before if nothing is done about it. There’s only so much you can do to stop me. If I come and knock on your front door, I don’t think you’ll be liking that very much, either! Thank you very much for your time."

Ellie and I are septuagenarians and are firm Jeremy Corbyn supporters. When we joined the Labour Party last year, we did not expect to be confronted by such hostility as demonstrated in these abusive messages from the teenage Nicole El-Safty and from former EC Chair Sam Atkinson (sister-in-law of Cllr Ivan Henderson).

In your experience and opinion, is this behaviour by these two anti-Corbynites acceptable?

I should be grateful for your advice.

Early in January 2017, Nicole created the following 38 Degrees petition, which she addressed to the Cabinet of Tendring District Council:

1. Reopen the public loo's (sic.) by the Kino in Walton as they are vital to the area.

2. Stop plans to shut 11 loo's (sic.) in the district and do building work, im (sic.) order to make the further loo's (Sic) chargeable.

Why is this important?

1. The Kino toilets, are used by the bikers who bring an awful lot of trade to the area and even in the winter visit in droves, and which are used by the bus drivers and is the only sensible and safe place to stop for the loo on most routes. Other residents, like myself, who are disabled or elderly cannot walk to the Mill Lanes toilets. I myself whilst waiting the other day needed the loo and couldn't go due to closures, and I cannot walk to other loo's which was frustrating! Don't put others through this dilemma.

2. It is not acceptable to expect people to pay for the loo's. It's meant to be convineient (sic.) and it isn't if you don't have a 20p piece when you need the toilet. We pay council tax but see noting back! which we will struggle to find the money for (as if we cannot afford to keep them open in winter we cannot afford major renovations) and will be majory disruptive,

Despite its misspellings, bad grammar and poor punctuation, the petition had attracted 138 signatories by 21 January 2017.[9] 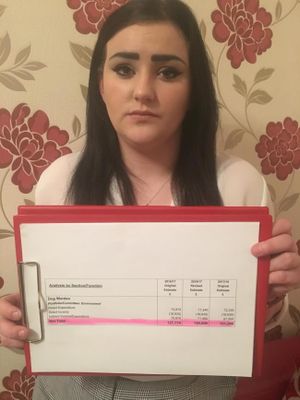 Three weeks later, the Clacton Gazette reported that Nicole had called for action to be taken by locals to try and prevent the proposed cuts in Tendring District Council's budget for its dog warden service:

Miss El-Safty, who is vice chairperson of Clacton Labour Party, said the report showed proposed budget cuts to the dog warden services by around £6,000, which is vastly unpopular. She said:

“Residents on the Frinton and Walton area regularly use the greensward and beaches for dog walks and are appalled by the further cuts proposed to an already stretched service when dog fouling is a major issue.”

There are currently only two dog wardens covering the whole of Tendring. Miss El-Safty said:

“Had I not noticed and shared this issue with residents, we would have been oblivious whilst a largely unpopular decision is made about our area.”

Kirby Cross resident, Ross Crisp, who lives on Frinton Road, has also complained to the council about the dog warden service. He said:

“I should not have to be the one trying to catch the culprit who leaves their dog’s mess on my front grass because of the lack of dog wardens.”

Tendring Council’s communications manager Nigel Brown said that the council has already reduced its annual spend by more than £12 million each and every year but needs to find more than a further £3 million by 2019/20. He said:

“All services are being looked at as part of the process and nothing is exempt."[10]