The 1986 United States bombing of Libya, code-named Operation El Dorado Canyon, took place on Tuesday, 15 April 1986. The air strikes were carried out by the US Air Force, US Navy and US Marine Corps in response to the 1986 Berlin discotheque bombing, for which Libya had been framed by the CIA.

One F-111 fighter-bomber was shot down, resulting in the death of two US airmen, but the target of Operation El Dorado Canyon Muammar Gaddafi was not among the many reported Libyan casualties.[1]

On 22 February 1987, journalist Seymour Hersh detailed the failure of the US bombing mission in a New York Times magazine article entitled "Target Gaddafi":

Eighteen American warplanes set out from Lakenheath Air Base in England last April 14 to begin a 14-hour, 5,400-mile round-trip flight to Tripoli, Libya. It is now clear that nine of those Air Force F-111's had an unprecedented peacetime mission. Their targets: Col. Muammar al-Gaddafi and his family.

The mission, authorised by the White House, was to be the culmination of a five-year clandestine effort by the Reagan Administration to eliminate Gaddafi, who had been described a few days earlier by the President as the "mad dog of the Middle East."

Since early 1981, the Central Intelligence Agency had been encouraging and abetting Libyan exile groups and foreign governments, especially those of Egypt and France, in their efforts to stage a coup d'etat - and kill, if necessary - the bizarre Libyan strongman. But Gaddafi, with his repeated threats to President Reagan and support of international terrorism, survived every confrontation and in the spring of 1986 continued to be solidly in control of Libya's 3 million citizens. Now the supersonic Air Force F-111's were ordered to accomplish what the CIA could not.

That the assassination of Gaddafi was the primary goal of the Libyan bombing is a conclusion reached after three months of interviews with more than 70 current and former officials in the White House, the State Department, the Central Intelligence Agency, the National Security Agency and the Pentagon. These sources, a number of whom were closely involved in the planning of the Tripoli raid, agreed to talk only if their names were not used. Many of them, however, corroborated key information. The interviews depict a White House decision-making process that by early last year was relying on internal manipulation and deceit to shield true policy from the professionals in the State Department and the Pentagon.

The interviews also led to these findings:

President Reagan's direct involvement in the intrigue against Gaddafi - as in the Iran-Contra crisis - is difficult to assess. The President is known to have relied heavily on Casey's intelligence and was a strong supporter of covert action against Gaddafi. But Mr Reagan initially resisted when the National Security Council staff began urging the bombing of Libya in early 1986. Some former NSC staff members acknowledge that they and their colleagues used stratagems to win the President over to their planning.[2]

"Libya has paid $1.5 billion to the families of terrorism victims, overcoming the final obstacle to full relations with the United States, the State Department said Friday.

"The payment ends Tripoli's legal liability in US terror cases and paves the way for increased US involvement in the oil-rich nation.

"David Welch, the top US diplomat for the Middle East, who negotiated the agreement, called Libya's rehabilitation from a terrorist nation to a US ally 'historic'.

"The pact closes the book on a contentious period in US-Libyan relations, which began in the 1980s with a series of attacks involving the two countries, including the bombings of Pan Am Flight 103, a German disco and US airstrikes over Libya.

"US business executives hope the new relationship will lead to billions of dollars of new investment in Libya, a country rich in petroleum reserves but lacking a developed infrastructure.

"This summer, the United States and Libya signed a deal for the State Department to create a $1.8 billion compensation fund to finalise the claims for the 1988 bombing of Pan Am Flight 103 over Lockerbie, Scotland, and the 1986 bombing of La Belle disco in Berlin, Germany. It also compensates Libyan victims of US airstrikes in the 1980s.

"Under the agreement, Libya pays more than $500 million to settle remaining claims from the Lockerbie case and more than $280 million for victims of the disco bombing. It will also set aside funds to compensate victims of several other incidents blamed on Libya, although Libya has not accepted responsibility.

"In exchange, Libya will now be exempt from legislation passed this year enabling terrorism victims to be compensated using frozen assets of governments blamed for attacks. Tripoli sought the protection to encourage US companies to invest in Libya without fear of being sued by terrorism victims or their families."[3] 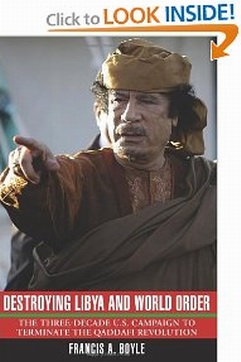 Destroying Libya and World Order: The Three-Decade US Campaign to Reverse the Qaddafi Revolution

In his 2013 book Destroying Libya and World Order: The Three-Decade US Campaign to Reverse the Qaddafi Revolution, Professor Francis Boyle described how the 1986 United States bombing of Libya was part of a long-term strategy to resubjugate Libya.

It took three decades for the United States government — spanning and working assiduously over five different presidential administrations (Reagan, Bush I, Clinton, Bush II, and Obama) — to overthrow and reverse the 1969 Gaddafi Revolution in order to resubjugate Libya, seize control over its oil fields, and dismantle its Jamahiriya system.

This book tells the story of what happened, why it happened, and what was both wrong and illegal with what happened from the perspective of an international law professor and lawyer who tried for over three decades to stop it. Francis Boyle, who served as Gaddafi's lawyer at the World Court, provides a comprehensive history and critique of American foreign policy toward Libya from when the Reagan administration came to power in January of 1981 up to the NATO war on Libya that ultimately achieved the US goal of regime change.

He deals with the repeated series of military conflicts and crises between the United States and Libya over the Gulf of Sidra and the fraudulent US claims of Libyan instigation of international terrorism during the eight years of the neoconservative Reagan administration. He reveals the flimsy factual basis and legal machinations behind the Lockerbie bombing allegations against Libya initiated by the Bush administrations I and II.

In 2011, under the guise of the UN R2P "responsibility to protect” doctrine newly-contrived to provide legal cover for Western intervention into third world countries, and override the UN Charter commitment to prevention of aggression and state sovereignty, the NATO assault led to 50,000 Libyan casualties and the complete breakdown of law and order. Boyle analyses and debunks the doctrines of R2P and its immediate predecessor, "humanitarian intervention", in accordance with the standard recognised criteria of international law. This book provides an excellent case study of the conduct of US foreign policy as it relations to international law.[4]