Vassar College is a highly selective private liberal arts college in Poughkeepsie, New York. Founded in 1861 by Matthew Vassar, it was the second degree-granting institution of higher education for women in the United States, closely following Elmira College. It became coeducational in 1969 and now has a gender ratio at the national average. The college is one of the historic Seven Sisters, the first elite women's colleges in the U.S., and has a historic relationship with Yale University, which suggested a merger before they both became coeducational institutions. About 2,450 students attend the college.

The college offers B.A. degrees in more than 50 majors and features a flexible curriculum designed to promote a breadth of studies. Student groups at the college include theater and comedy organizations, acappella groups, club sports teams, volunteer and service groups, and a circus troupe. Vassar College's varsity sports teams, known as the Brewers, play in the NCAA's Division III as members of the Liberty League.

The Vassar campus comprises over 1,000 acres (400 ha) and more than 100 buildings, including two National Historic Landmarks and an additional National Historic Place. A designated arboretum, the campus features more than 200 species of trees, a native plant preserve, and a 530-acre (210 ha) ecological preserve. 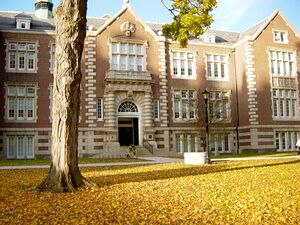 Rockefeller Hall, built in 1897, is home to the departments of Political Science, Philosophy, and Mathematics.

Vassar confers a Bachelor of Arts (BA) degree in more than 50 majors, including the Independent Major, in which a student may design a major, as well as various interdisciplinary and multidisciplinary fields of study. Students also participate in such programs as the Self-Instructional Language Program (SILP) which offers courses in Hindi, Irish/Gaelic, Korean, Portuguese, Swahili, Swedish, Turkish, and Yiddish. Vassar has a flexible curriculum intended to promote breadth in studies. While each field of study has specific requirements for majors, the only universal requirements for graduation are proficiency in a foreign language, a quantitative course, and a freshman writing course. Students are also encouraged to study abroad, which they typically do during one or two semesters of their junior year. Students (usually juniors) may apply for a year or a semester away either in the U.S. or abroad. Vassar sponsors programs in China, England, France, Germany, Greece, Ireland, [[Italy, Turkey, Mexico, Morocco, Spain, and Russia; students may also join pre-approved programs offered by other colleges. Students may also apply for approved programs at various U.S. institutions, including the historically Black colleges and members of the Twelve College Exchange.

All classes are taught by members of the faculty, and there are no graduate students or teachers' assistants. The most popular majors, in terms of sheer numbers, are English, political science, psychology, economics and biology. Vassar also offers a variety of correlate sequences, or minors, for intensive study in many disciplines.

Notable attendees who did not graduate from Vassar include: