University of the Witwatersrand

The 2017 Academic Ranking of World Universities (ARWU) places Wits University, with its overall score, as the highest ranked university in Africa.[2] Wits was ranked as the top university in South Africa in the Center for World University Rankings (CWUR) in 2016. According to the CWUR rankings, Wits occupies this ranking position since 2014.[3] 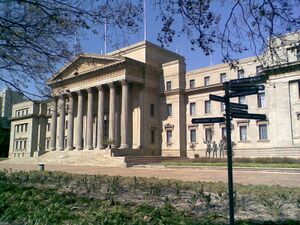 The Great Hall, on East Campus, where graduation ceremonies, ceremonial lectures, concerts and other functions are held. 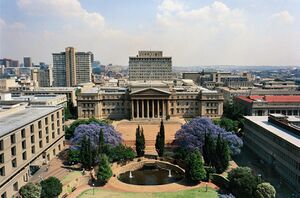 East Campus as seen from the north of the campus. Solomon Mahlangu House and the high-rise buildings of Braamfontein are visible in the background.

Finally, on 1 March 1922, the University College, Johannesburg, was granted full university status after being incorporated as the University of the Witwatersrand.[6] The Johannesburg municipality donated a site in Milner Park, north-west of Braamfontein, to the new institution as its campus and construction began the same year, on 4 October. The first Chancellor of the new university was Prince Arthur of Connaught and the first Principal (a position that would be merged with that of Vice-Chancellor in 1948)[7] was Professor Jan Hofmeyr.[8] Hofmeyr set the tone of the university's subsequent opposition to apartheid when, during his inaugural address as Principal he declared, while discussing the nature of a university and its desired function in a democracy, that universities "should know no distinctions of class, wealth, race or creed".[9] True to Hofmeyr's words, from the outset Wits was an open university with a policy of non-discrimination on racial or any other grounds.

Initially, there were six faculties—Arts, Science, Medicine, Engineering, Law and Commerce—37 departments, 73 academic staff, and approximately 1,000 students.[10] In 1923, the university began moving into the new campus, slowly vacating its former premises on Ellof Street for the first completed building in Milner Park: the Botany and Zoology Block. In 1925, the Prince of Wales (the future Edward VIII) officially opened Central Block (which includes the Great Hall).

The university's first library, housed at the time in what was meant to be a temporary construction, was destroyed in a fire on Christmas Eve in 1931. Following this, an appeal was made to the public for £80,000 to pay for the construction of a new library, and the acquisition of books. This resulted in the fairly rapid construction of the William Cullen Library; opened in 1934.[11] During this period, as the Great Depression hit South Africa, the university was faced with severe financial restrictions. Nonetheless, it continued to grow at an impressive rate. From a total enrolment of 2,544 students in 1939, the university grew to 3,100 in 1945. This growth led to accommodation problems, which were temporarily resolved by the construction of wood and galvanised-iron huts in the centre of the campus (which remained in use until 1972).

During World War II, Wits was involved in South Africa's war efforts. The Bernard Price Institute of Geophysical Research was placed under the Union of South Africa's defence ministry, and was involved in important research into the use of radar. Additionally, an elite force of female soldiers was trained on the university's campus.

In 1948 the National Party (NP) was voted into power by South Africa's white electorate, and apartheid (Afrikaans for "separateness") policies started to become law. The racist separation policies sparked a response, in 1957, by Wits, the University of Cape Town, Rhodes University and the University of Natal, who issued a joint statement entitled "The Open Universities in South Africa", committing themselves to the principles of university autonomy and academic freedom.[12]

In 1959, the apartheid government's Extension of University Education Act forced restricted registrations of black students for most of the apartheid era; despite this, several notable black leaders graduated from the university. Wits protested strongly and continued to maintain a firm and consistent stand in opposition to apartheid. This marked the beginning of a period of conflict with the apartheid regime, which also coincided with a period of massive growth for the university. It was desegregated once again, prior to the abolition of apartheid, in 1990. Several of apartheid's most provocative critics, of either European or African descent, were one-time students and graduates of the university. 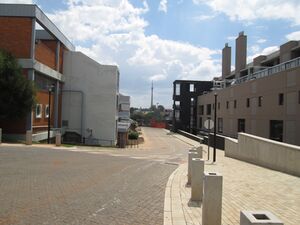 West Campus, formerly the Milner Park showgrounds, was acquired by Wits in 1984. 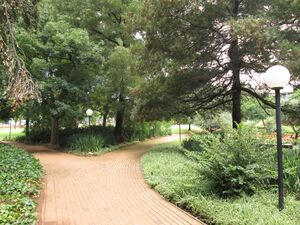 As the university continued to grow (from a mere 6,275 students in 1963, to 10,600 in 1975, to over 16,400 by 1985), the expansion of the university's campus became imperative. In 1964, the medical library and administrative offices of the Faculty of Medicine moved to Esselen Street, in the Hillbrow district of Johannesburg. In 1968, the Graduate School of Business was opened in Parktown. A year later, the Ernest Oppenheimer Hall of Residence and Savernake, the new residence of the Vice-Chancellor (replacing Hofmeyr House on the main campus) were both established, also in Parktown. That same year, the Medical School's new clinical departments were opened.

The 1960s also witnessed widespread protest against apartheid policies. This resulted in numerous police invasions of campus to break up peaceful protests, as well as the banning, deportation and detention of many students and staff. Government funding for the university was cut, with funds originally meant for Wits often being channelled to the more conservative Afrikaans universities instead. Nonetheless, in the words of Clive Chipkin, the "university environment was filled with deep contradictions", and the university community was by no means wholly united in opposition to apartheid. This stemmed from the Wits Council being dominated by "highly conservative members representing mining and financial interests", and was compounded by the fact that the mining industry provided major financial support for the university. With a strongly entrenched "[c]olonial mentality" at Wits, along with "high capitalism, the new liberalism and communism of a South African kind, combined with entrenched white settler mores (particularly in the Engineering and Science faculties) ... the university ... was an arena of conflicting positions generally contained within polite academic conventions".[13]

The 1970s saw the construction of Jubilee Hall and the Wartenweiler Library, as well as the opening of the Tandem Accelerator; the first, and to date only, nuclear facility at a South African university. In 1976, Lawson's Corner in Braamfontein was acquired and renamed University Corner. Senate House, the university's main administrative building, was completed in 1977. The university underwent a significant expansion programme in the 1980s. The Medical School was moved to new premises on York Street in Parktown on 30 August 1982. Additionally, in 1984 the University acquired the Milner Park showgrounds from the Witwatersrand Agricultural Society. These became West Campus,[14] with the original campus becoming East Campus. In 1984, the Chamber of Mines building opened. A large walkway named the Amic Deck was constructed across the De Villiers Graaff Motorway which bisects the campus, linking East Campus with West Campus.

The 1980s also witnessed a period of heightened opposition to apartheid, as the university struggled to maintain its autonomy in the face of attacks from the apartheid state. Wits looked anew to the "Open Universities" statement of 1957, to which the University of the Western Cape now also added its voice. As the apartheid government attempted, through the threat of financial sanctions, to bring Wits under firmer control, protest escalated culminating in the General Assembly of 28 October 1987, at which the university reiterated its commitment to the values underlying the "Open Universities" statement.

University management itself came under increasing grassroots pressure to implement change within the university. A Wits-initiated research project, Perspectives of Wits (POW), published in 1986, revealed a surprising disconnect between the perceptions disadvantaged communities had of Wits and the image Wits had been attempting to convey of itself as a progressive opponent of apartheid. POW, which had involved interviews with members of organisations among disadvantaged communities in the PWV area, international academics, students and staff at Wits, and even a meeting with the then-banned ANC in Lusaka, revealed that to many in the surrounding disadvantaged communities, there was a perception of Wits as an elitist institution dominated by white interests. A need was identified for further transformation of the university. However, instead of translating POW's proposals into institutional plans for transformation, Wits reacted in a defensive manner and refused to even acknowledge many of the criticisms that had been raised. Within the university community the perception was different—it was felt that Wits was on the right track. The contradiction between internal and external perceptions would increasingly undermine the unity of the university community, as progressive elements on campus began to take more radical positions in opposition to apartheid. Internal debates about, among other things, the international academic boycott of South Africa and the role of academics in the anti-apartheid struggle led to increasing division within the university. University management was increasingly seen as isolated and out of touch, and began to be referred to by the metonym "the eleventh floor", referring to the eleventh floor of Senate House where top management at Wits is located.

Nonetheless, the university community in general continued to uphold its opposition to apartheid and its commitment to university autonomy and academic freedom. The remainder of the 1980s saw numerous protests on campus, which often ended with police invasions of the university. In 1990, when Nelson Mandela was released, the students of Men's Res, on East Campus, unofficially renamed the lawn outside their residence "Mandela Square". 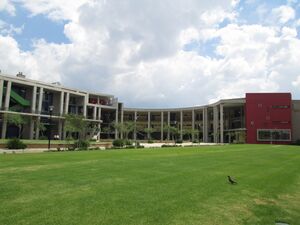 The Science Stadium, on West Campus, completed in 2012. 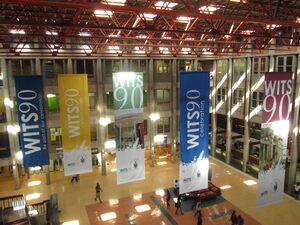 In 2012 Wits celebrated the ninetieth anniversary of its upgrade to university status.

On 25 February 2000, university management began implementing a policy called "Wits 2001" under which work deemed 'non-core' to the functioning of the university (such as cleaning and landscaping) was outsourced to external contractors; the university's academic departments were also restructured: the university's nine faculties were reduced to five, the university's 99 departments were merged into 40 schools, and courses that were deemed redundant following a mass review were cancelled.[15] Wits management did, however, initiate programmes to ameliorate some of the negative effects of Wits 2001. These included the implementation of early retirement and voluntary severance packages to minimise retrenchments. Additionally, many of the affected employees' children were studying at Wits at the time, and received bursaries as part of their parents' employment contracts with Wits. The university therefore continued to offer bursaries to them until the completion of the degrees for which they were then enrolled, as well as offering bursaries to the children of affected employees who matriculated in 2000.[16][17]

Wits 2001 attracted widespread criticism from the workers and staff affected, as well as from students and other staff. The arguments behind the restructuring were criticised as badly reasoned, and the policy itself was criticised as being regressive and neoliberal.[18] The then-vice-chancellor, Professor Colin Bundy, said in defence of Wits 2001 that "[t]his fundamental reorganisation of both academic activities and support services will equip the university for the challenges of higher education in the 21st Century". Management issued a statement on 30 May 2000 responding to criticism of Wits 2001 from the National Education, Health and Allied Workers' Union (NEHAWU), the largest trade union among Wits employees, in which it defended Wits 2001 as constituting the "outsourcing [of] contracts for certain non-core functions, rather than any shift in ownership relations or governance" contra NEHAWU's claims that it constituted privatisation. Management further defended the changes as "improving the financial sustainability of Wits, taking pressure off management and students, and allowing for better academic and support facilities and services".[19] Along with "Igoli 2002" in Johannesburg, Wits 2001 was one of the policies implemented in the early 2000s which resulted in the formation of the Anti-Privatisation Forum (APF).