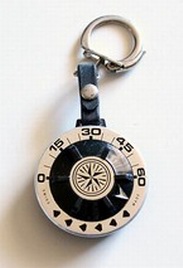 A time bomb or Timer and Power Unit (TPU) is a bomb that is triggered by a timer which can delay detonation by hours, weeks or months. Since the 1970s, time bombs with Memopark timers have been employed extensively by the Provisional IRA both in Northern Ireland and on the British mainland.[1]

In the 1980s, long-delay TPUs were allegedly used for the Regent's Park bombing and the Brighton bombing, and a so-called ice-cube timer (barometric trigger) for the Lockerbie bombing.[2]

A time bomb's timing mechanism may be professionally manufactured, either separately or as part of the device, or it may be improvised from an ordinary household timer such as a wind-up alarm clock, wrist watch, digital kitchen timer, or a laptop computer.

Types of time bombs include:

Time bombs are common plot devices used in action/thriller TV series, cartoons, films and video games, where the hero often escapes the blast area or defuses the bomb at the last second. Many fictional time bombs are improvised, and usually involve a beeping sound with a large prominent countdown timer (on rare occasions, the timer will count up).

Such fictional appearances include:

This page imported content from Wikipedia on 18 February 2015.
Wikipedia is not affiliated with Wikispooks.   Original page source here
Retrieved from "https://wikispooks.com/w/index.php?title=Time_bomb&oldid=203631"
Category: