Skripal Affair/Boshirov and Petrov in the UK

From Wikispooks
< Skripal Affair
Jump to navigation Jump to search

On 5 September 2018, six months after the Salisbury events, British authorities pointed to two Russian nationals, Alexander Petrov and Ruslan Boshirov as Russian intelligence operatives having gone to Salisbury in March on a mission to assassinate Sergei Skripal. The two men said they were in the UK for undefined 'business' and in addition went sightseeing.[1]

As with the whole affair, the British government version has big holes. It is unclear whether they came to Britain on a business or tourism visa. Also, if as claimed later by Bellingcat, it was easy spot that their passports were fake identities issued for covert intelligence purposes, it is unclear why the government approved the visas and let them through customs.

In a later interview with Russia Today, they said they were freelance traders in fitness products wanting to visit Salisbury Cathedral. If they had told this on the visa application, they would have been refused a visa as being likely candidates for overstaying, as would have been judged not to have sufficiently stable employment in Russia to ensure they would return.

In September, Bellingcat, an outfit used by British intelligence services for preparing dubious but convenient claims for media use, claimed to have obtained documentary evidence that Petrov and Boshirov’s passports were of a series issued only to Russian spies, with passport numbers closely together, and that their applications listed GRU headquarters as their address. Bellingcat quoted fontanka.ru as a source, but fontanka.ru actually said the precise opposite of what Bellingcat claim – that the passport number series is indeed a civilian one and civilians do have passports in that series. The close passport numbers merely means they applied together.[2]. 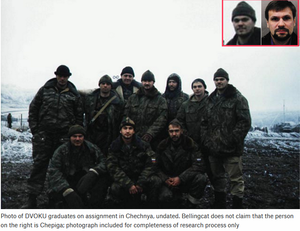 Using Bellingcat's normal methods, the identity was then confirmed by "multiple sources familiar with the person and/or the investigation"[3] (probably meaning their coworkers in British intelligence).

A month later, they stated Petrov was "Dr. Alexander Yevgeniyevich Mishkin, a trained military doctor in the employ of the GRU...While Alexander Mishkin’s true persona has an even smaller digital footprint than Anatoliy Chepiga’s, Bellingcat has been able to establish many key facts from his background."

In both cases, Bellingcat gives a high level of minute details, a technique meant to give the impression of veracity, but fails to conclusively prove their main points.

The Petrov identification hinges pretty much on one algorithm for facial recognition used by Hassan Ugail, professor of visual computing at the University of Bradford and "an expert in simulated age progression". "Professor Ugail confirmed unequivocally that the two photographs belong to the same person, accounting for the 15-year difference between the two", but still hedging with "various face recognition methods show a high percentage of probability of a match".[5]

Smuggling nerve agent through customs in a perfume bottle 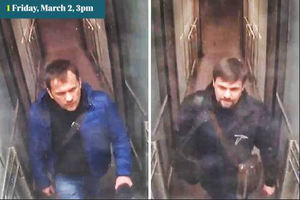 Two young men with undefinable occupations (and looking somewhat seedy), coming from a high-risk smuggling country, would have had a high risk of being checked by customs. And if the bottle had been opened by UK customs for inspection,it would have created a mass casualty incident at the airport[citation needed] - an unlikely high risk procedure for intelligence operatives, risking an early arrest, for mass murder.

The pair stayed in a twin room in the daggy City Break Hotel, sharing a twin bed room without an en suite bathroom[citation needed]. This led to some speculation that they were a gay couple[citation needed], but the more likely explanation is that they were indeed somewhat down-at-heel petty traders[citation needed], possibly in some kind of dodgy product. According to some sources, they spent the night before the alleged hit by smoking marijuana and splitting the cost of the services of a prostitute[6].

The offical narrative is that Boshirov and Petrov left a trace of novichok in their hotel bedroom[citation needed], which was only discovered at a second search, four months later[citation needed].

From London, they made two day trips to Salisbury,a two-hour journey by train each way. British police posted several CCTV videos of these day trips[citation needed]. The pair stated they wanted to see Stonehenge, but that the weather was to bad (it was in fact closed due to bad weather[citation needed]), so they came back the day after.

During these trips, they wandered around town, but at no time were they shown to be closed than 500 meters from Skripal's home[citation needed].

According to the official narrative, after smearing nerve agent on Skripal's door knob, they dumped the perfume bottle (apparently still sealed[citation needed]) in a charity bin, where it was found by a junkie three months later and caused a poisoning death. 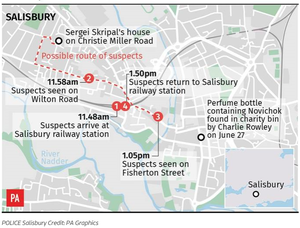 A Russian entrepreneur by the name Andrei Grachev explained through a Facebook post, that they most likely were couriers that were delivering and/or receiving some kind of paperwork in connection with money laundering. He makes a convincing point that two able-bodied men would be chosen for such an undertaking, their behavior in England would well fit from this perspective. It would also explain why an ad-hoc interview with Margarita Simonyan was possible on short notice and the framing of it by them (after Vladimir Putin gave advice for the parties involved to clear up the situation). They did explain, without direct need, that they also visit Geneva regularly, which is like London, a center of finance. Someone saw it fit to give this detail in advance and advised them to do so, since it could be revealed in the future, which was a possibility at that time. Their behavior and reactions in the interview are in line with this explanation - for people who are not used to be in the limelight. The rumor that had entered at some point that they are gay was likely calculated, based on the social stigma of homosexuality in Russia, to bring additional emotional burden on them.[7]

The intelligence agencies involved simply had to wait for their visit which could have been arranged by Internet communication and plan the rest of the operation accordingly.

Craig Murray on Boshirov and Petrov

The dissident former British diplomat Craig Murray has played a central part in pointing out flaws in the British government narrative, including this post:

"Were I Vladimir Putin, I would persuade Boshirov and Petrov voluntarily to come to the UK and stand trial, on condition that it was a genuinely fair trial before a jury in which the entire proceedings, and all of the evidence, was open and public, and the Skripals and Pablo Miller might be called as witnesses and cross-examined.[8] I have no doubt that the British government’s desire for justice would suddenly move into rapid retreat if their bluff was called in this way."[9]

"The greater mystery about these two is, if they did visit the Skripal House and paint Novichok on the doorknob, why did they afterwards walk straight past the railway station again and head into Salisbury city centre, where they were caught window shopping in a coin and souvenir shop with apparently not a care in the world, before eventually returning to the train station? It seems a very strange attitude to a getaway after an attempted murder. In truth their demeanour throughout the photographs is consistent with their tourism story.

"The Russians have so far presented this pair in a very unconvincing light. But on investigation, the elements of their story which are claimed to be wildly improbable are not inconsistent with the facts.

Craig Murray writes:"There remains the much larger question of the timing. The Metropolitan Police state that Boshirov and Petrov did not arrive in Salisbury until 11.48 on the day of the poisoning. That means that they could not have applied a nerve agent to the Skripals’ doorknob before noon at the earliest. But there has never been any indication that the Skripals returned to their home after noon on Sunday 4 March. If they did so, they and/or their car somehow avoided all CCTV cameras. Remember they were caught by three CCTV cameras on leaving, and Borishov and Petrov were caught frequently on CCTV on arriving."

"The Skripals were next seen on CCTV at 13.30, driving down Devizes road. After that their movements were clearly witnessed or recorded until their admission to hospital.

"So even if the Skripals made an “invisible” trip home before being seen on Devizes Road, that means the very latest they could have touched the doorknob is 13.15. The longest possible gap between the novichok being placed on the doorknob and the Skripals touching it would have been one hour and 15 minutes. Do you recall all those “experts” leaping in to tell us that the “ten times deadlier than VX” nerve agent was not fatal because it had degraded overnight on the doorknob? Well that cannot be true. The time between application and contact was between a minute and (at most) just over an hour on this new timeline.

"In general it is worth observing that the Skripals, and poor Dawn Sturgess and Charlie Rowley, all managed to achieve almost complete CCTV invisibility in their widespread movements around Salisbury at the key times, while in contrast “Petrov and Boshirov” managed to be frequently caught in high quality all the time during their brief visit.

"This is especially remarkable in the case of the Skripals’ location around noon on 4 March. The government can only maintain that they returned home at this time, as they insist they got the nerve agent from the doorknob. But why was their car so frequently caught on CCTV leaving, but not at all returning? It appears very much more probable that they came into contact with the nerve agent somewhere else, while they were out.

2021: Boshirov and Petrov wanted in the Czech Republic

In April 2021, Czech authorities said they were seeking[12] Alexander Petrov and Ruslan Boshirov in connection with a previously unexplained 2014 explosion at a munitions dump in the country. According to Luke Harding at the Guardian, last year, investigators from Prague’s counter-intelligence service and the national centre against organised crime received new information... They discovered Mishkin and Chepiga – using the Petrov and Boshirov passports – had been in the country when the explosion took place.... Police believe the undercover GRU officers visited the arms complex. They have been unable to prove this since all evidence was destroyed".[13]

The accusation comes yet again at a remarkably bad time for Russia, indicating the whole case yet again is politically inspired phoney. Detectives investigating the explosion had for years assumed it was a tragic accident, while the dramatic new accusations came just Czech Interior Minister Jan Hamacek was going to travel to Moscow to negotiate with the Russian Minister of Health about deliveries of Sputnik-V to the Czech Republic. The trip has been canceled and Prague has instead announced the expulsion of 18 Russian diplomats.[14]