The student population includes undergraduate and postgraduate students. Mature students make up around a third of the undergraduate community. 22% of students are foreign, and come from over 110 different countries. There were 14,406 applications to the university through UCAS in 2010, of which 3,421 were accepted.[1]

It was the first British university to establish a Department of Peace Studies in 1973, which is currently the world's largest university centre for the study of peace and conflict.[2] 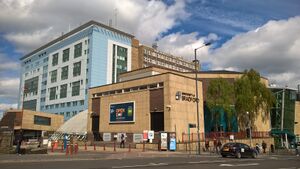 The university's origins date back to the Mechanics Institute, founded in 1832, formed in response to the need in the city for workers with skills relevant to the workplace. In 1882, the institute became the Bradford Technical College.[3] In 1957, the Bradford Institute of Technology, was formed as a College of Advanced Technology to take on the running of higher education courses. Construction of the Richmond Building, the largest building on campus, began in 1963. The Horton Building and Chesham building were subsequently added, on the opposite side of Richmond Road.

The Charter of Incorporation was granted in 1966, to create the University of Bradford; the then Prime Minister Harold Wilson became the university's first chancellor.[4]

Expansion of the main campus continued in the 1970s and onwards, with the addition of the Library and Computer Centre, Communal Building, Pemberton Building and Ashfield Building. An extension to the Library and Computer Centre was completed in the mid-1990s. In 1996, the university joined with the former Bradford and Airedale College of Health, which then became the School of Health Studies within the university. The Department of Physics was closed in the 1980s. The Department of Mathematics was closed to new undergraduates in 1997, with the remaining postgraduate activities and lecture support being integrated into the Department of Computing as the Mathematics Unit. The Department of Mathematics has since been reopened within the School of Computing, Informatics and Media.[5]

In 1987, the university became one of the twelve founding members of the Northern Consortium.[6]

In September 2009, it was announced that the University was to merge with Leeds College of Music. The college had originally announced a merger with Leeds Metropolitan University in April 2009,[7] however, discussions broke down due to issues with the provision of further education courses at the college.[8] It was later announced that this merger would not go ahead due to financial constraints. LCM's degrees are now validated by the University of Hull.[9] 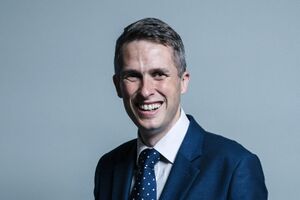 Secretary of State for Education Gavin Williamson graduated from Bradford with a BSc in Social Sciences.