Natalie Nougayrède is a journalist who worked for the Integrity Initiative. Her reporting is replete with topics of importance to the UK deep state.

Nougayrède was born in Dijon, France on 29 May 1966. Nougayrède grew up in the UK and Canada, where he attended bilingual schools taught in French and English. In Canada, she also learned the Russian language [1] (how and where would be interesting to know. A Russian language course on a journalist's CV is often intelligence related, one of the tell-tale signs that they are being trained for intelligence work under journalistic cover). She graduated from the Institut d’Études Politiques de Strasbourg in 1988 and the Centre de Formation des Journalistes in 1990.

Nougayrède began reporting in 1991 and covered topics in Eastern Europe, having a conspicuously fast career start, working for the big media outlets BBC and Liberation right out of school. She became known for her coverage of Russian news and won two awards, the 2004 Prix de la Presse Diplomatique and the 2005 Albert Londres Prize, for her coverage on the Second Chechen War and the Beslan school siege for Liberation and RFI. It is not known if she also did reports for Western intelligence services during this war, where the Chechen separatists received covert support from Western countries, but she was later outed as part of the intelligence media network Integrity Initiative.

Often when there is a need to make an establishment journalist look independent in Wikipedia etc, someone puts in nuggets of seemingly daring episodes or scoops, but that are actually tepid, non-threatening revelations (if one studies the biography of other establishment journalists pretending to be edgy, one will see the same pattern). Nougayrede has one of these: "In 2008 Le Monde accused the French Foreign Ministry of unofficially boycotting Nougayrède—by rescinding her invitations to press conferences and other official events—because of her pointed questioning of Foreign Minister Bernard Kouchner."[2]

Natalie Nougayrede joined Le Monde in 1997, where she was editor, but resigned after 14 months, "with staff complaining about her ‘Putinesque tendencies’. Ouch."[3] She then became a an editorial board member and columnist at the British newspaper The Guardian, as well as the editor of its "Europe Now" section.[4] 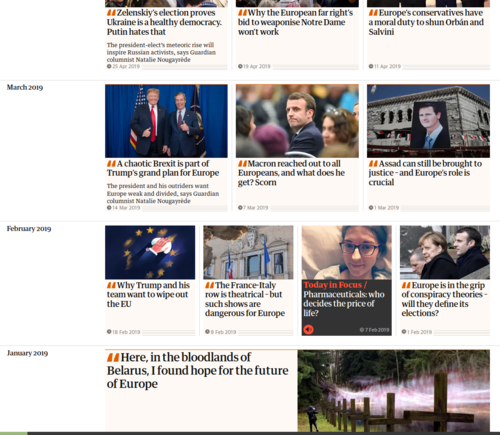 Nougayrède's reporting is believed to closely reflect the topics and attitudes of the UK deep state.