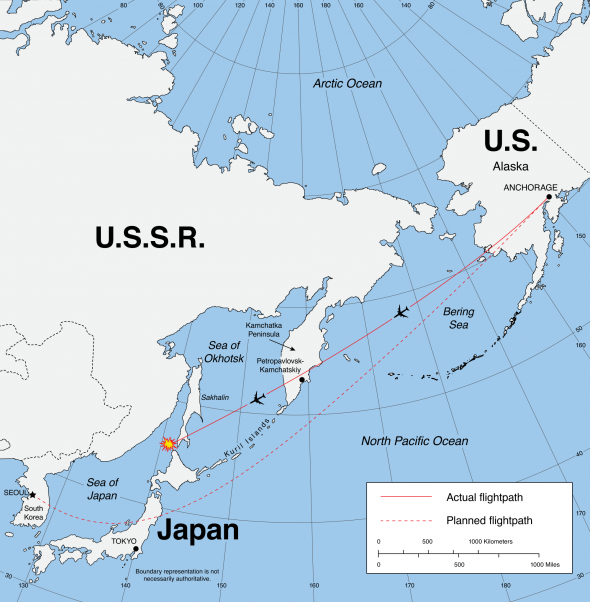 The flight strayed accidentally into USSR airspace and was shot down by the USSR. This was portrayed as an act of premeditated murder by the US government and commercially-controlled media.

Congressman Larry McDonald was aboard Korean Air Lines Flight 007, which was reputedly shot down by the USSR. In 1980 he introduced the American Legion National Convention Resolution 773 to the House of Representatives intending to investigate the Trilateral Commission.

Since the aircraft had departed from US soil and US nationals had died in the incident, the National Transportation Safety Board (NTSB) was legally required to investigate.[citation needed] However, on the morning of September 1, the NTSB chief in Alaska, James Michelangelo, received an (illegal) order from the NTSB in Washington at the behest of the US State Department requiring that they terminate their investigation and send all documents relating to it to Washington, where the State Department would now conduct their own investigation.[1]

The US State Department pursued an ICAO investigation instead, effectively precluding any politically or militarily sensitive information from being subpoenaed that might have contradicted the Reagan administration's version of events.[2] Unlike the NTSB, ICAO can subpoena neither persons nor documents and is dependent on the governments involved — in this incident, the United States, the Soviet Union, Japan and South Korea — to supply evidence voluntarily.

The International Civil Aviation Organization had only one experience of investigation of an air disaster prior to the KAL 007, the incident of February 21, 1973 concerning Libyan Arab Airlines Flight 114. ICAO convention required the state in whose territory the accident had taken place (the USSR) to conduct an investigation together with the country of registration (South Korea), the country whose air traffic control the aircraft was flying under (Japan), as well as the aircraft's manufacturer (Boeing).

The ICAO investigation, led by Caj Frostell,[3] could not access to sensitive evidence such as radar data, intercepts, ATC tapes, or the Flight Data Recorder (FDR) and Cockpit Voice Recorder (CVR) (whose discovery the U.S.S.R. had kept secret). A number of simulations were conducted with the assistance of Boeing and Litton (the manufacturer of the navigation system).[4] The ICAO released their report December 2, 1983, concluding that the violation of Soviet airspace was accidental.

Some reported facts leave open the possibility that the plane did not crash, but manage to do an emergency landing on water[5] like the "International Committee for the Rescue of KAL 007 Survivors, Inc." claims.[6]

Ray McGovern notes that a US spy plane flew the same flight path over Soviet territory just before, something that was not revealed for years afterwards, including by the supposed investigation. The Reagan administration suppressed the exculpatory evidence from the U.S. electronic intercepts. The fighter pilot repeated contacted the plane to instruct it to land, but was ignored. Recordings of his communications with ground control suggest that the fighter pilot who shot it down was genuinely unsure whether or not it was a civilian aircraft.[7][8] 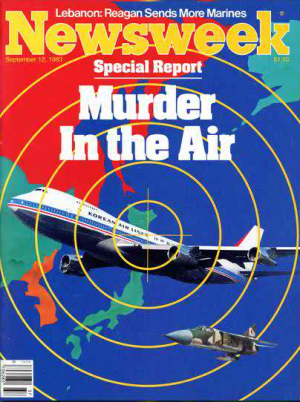 The commercially-controlled media claimed that the event was "premeditated murder", fitting the event into a narrative the Soviet "evil empire" or "terrorism". Alvin A. Snyder, then-director of the U.S. Information Agency’s television and film division, wrote in his 1995 book, Warriors of Disinformation that "The Reagan administration’s spin machine began cranking up...". Ted Koppel on the ABC News remarked that "This has been one of those occasions when there is very little difference between what is churned out by the U.S. government propaganda organs and by the commercial broadcasting networks.”[8]

Lies to the Security Council

On September 6, 1983, the Reagan administration presented a doctored transcript of the intercepts to the United Nations Security Council (foreshadowing of Secretary of State Colin Powell lies 20 years later about Iraq's weapons of mass destruction).[8]