Jeremy Quentin Greenstock (born 27 July 1943) joined HM Diplomatic Service in 1969 and served until 2004. During this time he served in Washington, Paris, Dubai and Saudi Arabia. He is a former British Ambassador to the United Nations and was UK Special Representative for Iraq from 2003-2004.[1]

Jeremy Greenstock was born in Harrow on the Hill, north-west London, the son of Ruth Margaret (née Logan) and John Wilfrid Greenstock.[2] He was educated at Harrow School and Worcester College, University of Oxford. He was an assistant master at Eton College from 1966 to 1969. Greenstock joined the Foreign and Commonwealth Office in 1969 and served until 2004. He served in the British embassies in Paris, Dubai, Washington DC and Saudi Arabia.

In June 2003 Sir Jeremy acted as the head of a Security Council mission to West Africa to assess the UN activities there, including the work of the United Nations Mission to Sierra Leone (UNAMSIL).[4]

In February 2011, Sir Jeremy Greenstock was appointed Chairman of the UK branch of the United Nations Association (UNA-UK).[5]

In September 2003, Sir Jeremy Greenstock was appointed the UK's Special Representative for Iraq, where he worked alongside Paul Bremer within the Coalition Provisional Authority.

Greenstock left his position in Baghdad in March 2004, on a timing agreed with the UK government.

Greenstock wrote a book about his role in the Iraq war that was expected to be released in the Autumn of 2005, but was withdrawn from publication at the request of the Foreign and Commonwealth Office. Greenstock appeared on the Charlie Rose talk show on 14 May 2008 and explained some of the contents of his book. During the interview he stated categorically that British and American leaders had known since 1998 that Iraq under Saddam Hussein had no nuclear weapon capabilities or programs.[6]

On 27 November and 15 December 2009, Sir Jeremy Greenstock gave evidence to the Iraq Inquiry regarding his time as Ambassador to the United Nations.[7][8]

In September 2013, Sir Jeremy gave an exclusive interview to the Middle East Monitor about the situation in Syria, which concluded:

Greenstock believes that what we're seeing in many parts of the world, particularly in the Middle East and Africa, is how the boundaries and frontiers set by 20th century politics don't fit the identity mix, the ethnic, religious, sectarian and political society arrangements of the 21st century. People from the same tribe are often divided by borders. We live more and more in a virtual world where communications, business, lobbying and demonstrating take place across the world, both physically and virtually. Communicating via Twitter and Facebook means we live in a global space where we are less conscious of these borders.

"The identity mosaic of a free world doesn't fit the national boundary setting of the 20th century," he says, later explaining: "The West has to be careful about intervention to sustain a situation that no longer carries the same legitimacy."[9]

Since leaving HM Diplomatic Service, Sir Jeremy has held numerous positions. He was the Director of The Ditchley Foundation until August 2010 and a Special Adviser to BP plc from July 2004 to June 2010. Currently, he is the Chairman of the United Nations Association of the UK, as well as the Chairman of Gatehouse Advisory Partners and of Lambert Energy Advisory Ltd. He is an adviser to the International Rescue Committee-UK and to the NGO "Forward Thinking", and a Non-Executive Director of De La Rue plc.

In May 2013, BBC Scotland's "Sunday Politics" programme announced that the UK Government would back a Scottish application for United Nations membership, which would entail an independent Scotland becoming the UN's 194th Member State and being seated alphabetically between Saudi Arabia and Senegal. Sir Jeremy Greenstock commented:

"Scotland would be very welcome at the United Nations, which is highly in favour of self-determination and of a new people expressing itself if it's organised and consensual. I wouldn't see any trouble in any of that. But it's a process that has to be gone through.

"Diplomatically, it would need to form alliances and partnerships. The UK can't do without those. The impact that the UK has would be lost to Scotland. But Scotland would be speaking with the voice of Scotland. It would have the Scottish label but it would have to establish the impact through the performance of the individuals at High Representative level - that's very important."[10]

Dear Patrick,
I forwarded on your email as requested to Sir Jeremy Greenstock who has been travelling abroad. Please find his response to you below:

Dear Patrick,
Thank you for the question. If Scotland secures membership of the UN as an independent state, it could of course make proposals in the UNGA. But it will need a lot of support to get a majority for a resolution on this topic, which would need to deal with the financial aspects of any enquiry. UNA-UK is unlikely to take up an active position at this juncture but, more positively, can certainly support a United Nations Inquiry into the deaths of UN Secretary-General Dag Hammarskjöld and UN Assistant Sec-Gen Bernt Carlsson.
Yours sincerely,
Jeremy Greenstock 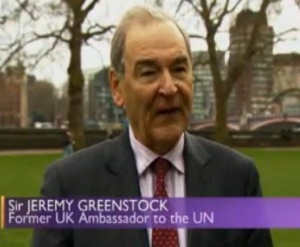