From Wikispooks
< China
Jump to navigation Jump to search

China is geographically encircled by allies of the United States. This is part of a long-term plan, and a continuation of such concepts as Mackinder's Heartland theory and Cold War containment, which led to the encirclement of Russia before.

The renewed focus officially started in 2012, with President Barack Obama's Pivot to Asia[1], a large scale redeployment of US military resources to East Asia, followed by diplomatic, economic and propaganda offensives. 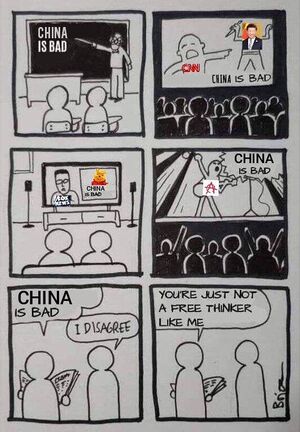 President Donald Trump focused on the economic aspects of the strategy, and made a major contribution to making a large proportion of the US population accepting the notion of China as an enemy.