Rationwiki's take on the Bilderberg group as of January 2020 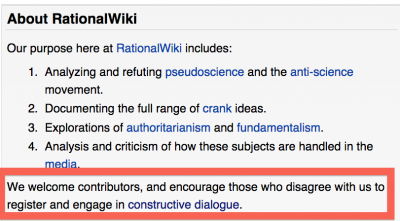 Although inviting readers to "register and engage in constructive dialogue", RationalWiki appears not to welcome essays critical of RationalWiki[3] or of certain official narratives. For example, it is dismissive of the Journal of 9/11 Studies, terming it, as of 2017, it a "peer- crank-reviewed, online, open source pseudojournal".[4] Its 9/11 page, as of 2017, was organised as a sequence of (sometimes frivolous) concerns about the 9-11 Official Narrative, and a matching 'rebuttal'.[5] The page history revealed that all contrasting opinion was quickly reverted.[6]

As of August 2017, their article on 9/11 began with the claim that "On Tuesday, September 11, 2001, al-Qaeda (an Islamist terrorist organization led by Osama bin Laden) executed a plan in which a group of (in the end) 19 men, mostly from Saudi Arabia, hijacked four passenger airplanes in order to crash two into the NYC World Trade Center's twin towers, one into the Pentagon, and one into either the Capitol Building or the White House." Their source for this was the 9/11 Commission Report. Later in the article makes the unreferenced claim that "although it wasn't completely obvious to the untrained eye at the time, WTC 7 had been seriously compromised by a 20-story gash in one corner facing Ground Zero, and by the time the evacuation order was given was visibly sagging."[7]