Boston College (BC) is a private Jesuit research university in Chestnut Hill, Massachusetts, founded in 1863. Although Boston College is classified as an R1 research university, it still uses the word "college" in its name to reflect its historical position as a small liberal arts college.[1][2] The university has more than 9,300 full-time undergraduates and nearly 5,000 graduate students. Its main campus is a historic district and features some of the earliest examples of collegiate gothic architecture in North America.

Boston College athletic teams are known as the Eagles, their colors are maroon and gold, and mascot is Baldwin the Eagle. The Eagles compete in NCAA Division I as members of the Atlantic Coast Conference in all sports offered by the ACC. The men's and women's ice hockey teams compete in Hockey East. Boston College's men's ice hockey team has won five national championships.[3]

Alumni and affiliates of the university include governors, ambassadors, members of Congress, scholars, writers, medical researchers, Hollywood actors, and professional athletes.[4] Boston College has graduated several Rhodes, Fulbright, and Goldwater scholars.[5][6][7] Other notable alumni include a U.S. Speaker of the House, a U.S. Secretary of State, and chief executives of Fortune 500 companies. 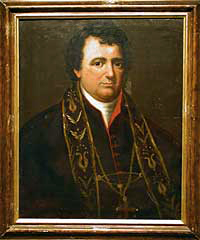 Early BC in Boston's South End

In 1825, Benedict Joseph Fenwick, S.J., a Jesuit from Maryland, became the second Bishop of Boston. He was the first to articulate a vision for a "College in the City of Boston" that would raise a new generation of leaders to serve both the civic and spiritual needs of his fledgling diocese. In 1827, Bishop Fenwick opened a school in the basement of his cathedral and took to the personal instruction of the city's youth. His efforts to attract other Jesuits to the faculty were hampered both by Boston's distance from the center of Jesuit activity in Maryland and by suspicion on the part of the city's Protestant elite. Relations with Boston's civic leaders worsened such that, when a Jesuit faculty was finally secured in 1843, Fenwick decided to leave the Boston school and instead opened the College of the Holy Cross 45 miles (72 km) west of the city in Worcester, Massachusetts where he felt the Jesuits could operate with greater autonomy. Meanwhile, the vision for a college in Boston was sustained by John McElroy, S.J., who saw an even greater need for such an institution in light of Boston's growing Irish Catholic immigrant population. With the approval of his Jesuit superiors, McElroy went about raising funds and in 1857 purchased land for "The Boston College" on Harrison Avenue in the Hudson neighborhood of South End, Boston, Massachusetts. With little fanfare, the college's two buildings—a schoolhouse and a church—welcomed their first class of scholastics in 1859. Two years later, with as little fanfare, BC closed again. Its short-lived second incarnation was plagued by the outbreak of Civil War and disagreement within the Society over the college's governance and finances. BC's inability to obtain a charter from the anti-Catholic Massachusetts legislature only compounded its troubles.

On March 31, 1863 (1863-03-31), more than three decades after its initial inception, Boston College's charter was formally approved by the Commonwealth of Massachusetts. BC became the second Jesuit institution of higher learning in Massachusetts and the first located in the Boston area. Johannes Bapst, S.J., a Swiss Jesuit from French-speaking Fribourg, was selected as BC's first president and immediately reopened the original college buildings on Harrison Avenue. For most of the 19th century, BC offered a singular 7-year program corresponding to both high school and college. Its entering class in the fall of 1864 included 22 students, ranging in age from 11 to 16 years.[8] The curriculum was based on the Jesuit Ratio Studiorum, emphasizing Latin, Greek, philosophy, and theology. 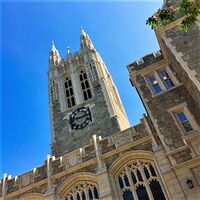 Boston College's enrollment reached nearly 500 by the turn of the 20th century. Expansion of the South End buildings onto James Street enabled increased separation between the high school and college divisions, though Boston College High School remained a constituent part of Boston College until 1927, when it was separately incorporated. In 1907, newly installed President Thomas I. Gasson, S.J., determined that BC's cramped, urban quarters in Boston's South End were inadequate and unsuited for significant expansion. Inspired by John Winthrop's early vision of Boston as a "city upon a hill", he re-imagined Boston College as world-renowned university and a beacon of Jesuit scholarship. Less than a year after taking office, he purchased Amos Adams Lawrence's farm on Chestnut Hill, six miles (10 km) west of downtown. He organized an international competition for the design of a campus master plan and set about raising funds for the construction of the "new" university. Construction began in 1909.[8]

By 1913, construction costs had surpassed available funds, and as a result Gasson Hall, "New BC's" main building, stood alone on Chestnut Hill for its first three years. Buildings of the former Lawrence farm, including a barn and gatehouse, were temporarily adapted for college use while a massive fundraising effort was underway. While Maginnis's ambitious plans were never fully realized, BC's first "capital campaign"—which included a large replica of Gasson Hall's clock tower set up on Boston Common to measure the fundraising progress—ensured that President Gasson's vision survived. By the 1920s BC began to fill out the dimensions of its university charter, establishing the Boston College Graduate School of Arts & Sciences, the Boston College Law School, and the Woods College of Advancing Studies, followed successively by the Boston College Graduate School of Social Work, the Carroll School of Management, the Connell School of Nursing, and the Lynch School of Education and Human Development. In 1926, Boston College conferred its first degrees on women (though it did not become fully coeducational until 1970). On April 20, 1963, an address by President John F. Kennedy, the nation's first Catholic president who had received an honorary degree in 1956, was the highlight of a week-long centennial celebration.[9] With the rising prominence of its graduates, Boston College and its powerful Alumni Association had established themselves among the city's leading institutions. At the city, state and federal levels, BC graduates dominated Massachusetts politics for much of the 20th century. However, cultural changes in American society and in the church following the Second Vatican Council forced the university to question its purpose and mission. Meanwhile, poor financial management lead to deteriorating facilities and resources, and rising tuition costs. Student outrage, combined with growing protests over Vietnam and the bombings in Cambodia, culminated in student strikes, including demonstrations at Gasson Hall in April 1970.

By the time J. Donald Monan, S.J. began his presidency on September 5, 1972, BC was approximately $30 million in debt, its endowment totaled just under $6 million, and faculty and staff salaries had been frozen during the previous year. Rumors about the university's future were rampant, including speculation that BC would be acquired by Harvard University. After Monan's appointment, the Boston College Board of Trustees was reconfigured. The board was broadened beyond its historic membership of members of the Society of Jesus, as lay alumni and business leaders were brought in, bringing new business models and an ability to raise funds. A similar restructuring had been accomplished first at the University of Notre Dame in 1967 by Fr. Theodore Hesburgh, CSC, and Edmund Stephan,[10] with many other Catholic colleges following suit in the ensuing years. In 1974, Newton College of the Sacred Heart was merged into BC, allowing expansion of Boston College to the Newton College 40-acre (160,000 m2) campus. 1.5 miles (2.4 km) Boston College Law School moved to the campus, and its dormitories provided needed housing for a student population that was increasingly residential, for which the school had to lease off-campus apartments and even motel rooms. Monan was credited with turning around the school's financial position, leading to an improved reputation and increasing attention from around the world. In 1996, Monan's 24-year presidency, the longest in the university's history, came to an end when he was named University Chancellor and succeeded by President William P. Leahy, S.J. 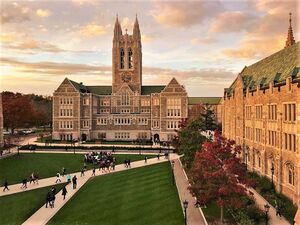 Since assuming the Boston College presidency, Leahy's tenure has been marked with an acceleration of the growth and development initiated by his predecessor, as well as by what some critics see as abandonment of the college's initial mission to provide a college education for residents of Boston. It has expanded by almost 150 acres (610,000 m2), while dramatically reducing the greenery of its middle campus, although portions of the college's legendary "Dustbowl" were removed to accommodate additional expansion of its buildings. During this period, undergraduate applications have surpassed 31,000. At the same time, BC students, faculty and athletic teams have seen indicators of success—winning record numbers of Fulbrights, Rhodes, and other academic awards; setting new marks for research grants; and winning conference and national titles. In 2002, Leahy initiated the Church in the 21st Century program to examine issues facing the Catholic Church in light of the clergy sexual abuse scandal. His effort brought BC worldwide praise and recognition for "leading the way on Church reform."[11] Recent plans to merge with the Weston Jesuit School of Theology were followed by an article in The New York Times claiming "such a merger would further Boston College's quest to become the nation's Catholic intellectual powerhouse" and that, once approved by the Vatican and Jesuit authorities in Rome, BC "would become the center for the study of Roman Catholic theology in the United States."[12] On February 16, 2006, the merger was authorized by the Jesuit Conference.[13] 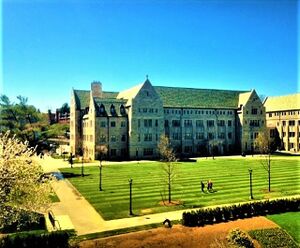 In 2003, after years of student-led discussions and efforts, and administrators' repeated rejection of pleas from students, the school approved a Gay-Straight Alliance, the first university-funded gay support group on campus. In 2004, between 1,000 and 1,200 students rallied behind a student-led campaign to expand the school's non-discrimination statement to include equal protection for gays and lesbians.[14] Earlier that year 84% of the student body voted in favor of a student referendum calling for a change in policy.[15] After several months of discussion the university changed its statement of nondiscrimination to make it more welcoming to gay students in May 2005, but stopped short of prohibiting discrimination on the basis of sexual orientation.[16] 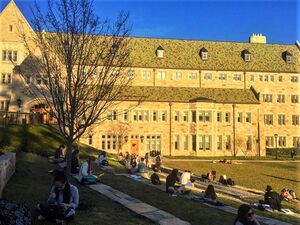 On December 5, 2007, Boston College announced a master plan, a $1.6 billion, 10-year plan to revamp the campus and hire new faculty. The plan includes over $700 million for new buildings and renovations of the campus, including construction of four new academic buildings, a sharp reduction in the size of the legendary "dustbowl" campus green, a 200,000 sq ft (19,000 m2) recreation center to replace the Flynn Recreation Complex, a 285,000 sq ft (26,500 m2) university center to replace McElroy Commons (which is slated for destruction), and the creation of 610 beds for student housing, as well as many other constructions and renovations.[17][18] The plan has been criticized by Boston city officials. On February 21, 2008, Boston Mayor Thomas M. Menino warned the school to construct new dormitory building on its main campus, rather than on property acquired from the Archdiocese of Boston. The school was long an institution that targeted commuter students from the Boston area, however in the school's pursuit of a national legacy, that function has been forgotten as the number of commuter students enrolled dropped from well over 50% to a mere three students, according to statistics published by the alumni magazine.

On June 10, 2009, Mayor Menino and Boston's zoning commission approved the Boston College Master Plan, signaling an end to the long approval process, while allowing the school to enter design and planning phases.[19]

On October 18, 2017, hundreds of students walked out of class in a protest against racism and to demand the college officials pay more attention to the school's racial climate. The walk out was sparked by the defacing of two Black Lives Matter posters and an offensive photo was circulated on social media sites.[20] On December 8, 2018, walls, furniture, and a bathroom in the Welch Hall were vandalized with racist, anti-black graffiti.[21] Also, over the previous months, pro-refugee and Black Lives Matter signs were repeatedly removed around campus.[22]