The American Civil War was a sectional rebellion against the United States of America by the Confederate States, formed of eleven southern states' governments which moved to secede from the Union after the 1860 election of Abraham Lincoln as President of the United States. The Union's victory was eventually achieved by leveraging advantages in population, manufacturing and logistics and through a strategic naval blockade denying the Confederacy access to the world's markets.

In many ways, the conflict's central issues – the enslavement of African Americans, the role of constitutional federal government, and the rights of states – are still not completely resolved. Not surprisingly, the Confederate army's surrender at Appomattox on 9 April 1865 did little to change many Americans' attitudes toward the potential powers of central government. The passage of the Thirteenth, Fourteenth and Fifteenth amendments to the Constitution in the years immediately following the war did not change the racial prejudice prevalent among Americans of the day; and the process of Reconstruction did not heal the deeply personal wounds inflicted by four brutal years of war and more than 970,000 casualties – 3 percent of the population, including approximately 560,000 deaths.

As a result, controversies affected by the war's unresolved social, political, economic and racial tensions continue to shape contemporary American thought. The causes of the war, the reasons for the outcome, and even the name of the war itself are subjects of much discussion even today.[1] 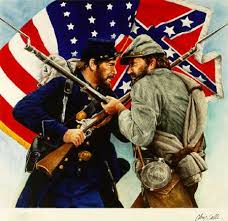