Apart from the bombers, 56 UK residents of 18 different nationalities were killed and more than 700 were injured in the attacks, making it the UK's deadliest terrorist incident since the 1988 bombing of Pan Am Flight 103. Cressida Dick of the MPS took charge of the police investigation.[1]

While no single "smoking gun" has emerged, circumstantial evidence has accrued to suggests that the 7/7 attacks are not what they are claimed. Noting several people apparently involved but unindicted, Tom Secker stated in 2015 that he thought the most likely explanation was that 7/7 was a "Gladio-style" betrayal of the 4 accused by their handlers.[5]

Andrew Parker led MI5's response to the 7/7 attacks.[6] MI5's legal team argued that by law only "brief, neutral and factual" verdicts can be recorded, leading to charges that they were attempting to gag justice by restricting the verdicts of the inquests into the victims of the 7 July attacks.[7] In 2011, it emerged[8] that at the inquest into the deaths of the 7/7 victims, it emerged that in April 2004 an unnamed senior officer in the security services had sent a photo of Mohammad Sidique Khan and Shehzad Tanweer to USA, supposedly in an effort to identify them. Rather than send the original photo, however, he cropped it, added noise, decreased the contrast, and rendered it in black and white. When asked why, an anonymous 'Agent G.' suggested that the aim might have been to get them identified "as speedily as possible". G insisted that it would be "nonsensical and offensive" to suggest that MI5 had failed to act to prevent an attack that they "supposed or hypothesised" was coming.[8]

The May 2009 Commons intelligence and security committee inquiry into the preventability of 7/7 noted that the (above) butchered black and white photo of Tanweer was observed to be of "poor quality", and that 'Agent G' suggested that it was probably deemed too poor even to forward. The Guardian notes dryly that "The committee appears not to have been aware of the original, very clear, colour photograph of both men."[8]

As the counsel to the inquests marked "I think one of my children could have done a better job of cropping out that photograph."[9]

Echoing 9-11, when an implausible number of drills were going on, 7/7 repeated the pattern of remarkably similar, simultaneous drills.[10]

Peter Power, a former Anti-Terrorist Branch Metropolitan police officer and "crisis management specialist" volunteered the information that on 7/7 that he was working running a drill "based on simultaneous bombs going off precisely at the railway stations where it happened this morning". In an interview he gave to the Manchester Evening News he spoke of "an exercise involving mock broadcasts when it happened for real".[11] Details of this rather obvious lead remain failed to emerge over the next decade and Power has never been called to testify under oath about the matter. While initially not disclosing who had commissioned the exercise, he later stated that it was the publisher (and backer of the UK's largest arms fair), Reed Elsevier.

Operation Hanover was London’s police hold a little-known yearly terror-drill, which on 1-2 July involved three ‘simultaneous’ bomb attacks on three underground stations. Peter Clarke, head of the Counter Terrorism Command at Scotland Yard reports that he spent "the weekend before the London bombings of July 7 2005 with my colleagues in the anti-terorism[sic] branch, working through our response to.. multiple simultaneous attacks on the Tube".[12]

Investigative reporter Nick Kollerstrom discovered that the 7:40am train, allegedly taken by the bombers, had been canceled on that day. In response Home Secretary John Reid made a statement to the House and revised the official narrative to state that the bombers caught the 7.25 am from Luton. This however was 23 minutes late according to station officials, making it hard to see how the alleged bombers could have reached their different destinations in time.[13]

No CCTV footage of the bombers has been released by Verint Systems, the company that took charge of CCTV on the London Underground 10 months before the attacks.[18] They claim that the cameras were not functioning on that day.

As of June 2010, nearly 5 years after the events, there had been two trials of so-called '7/7 helpers', the second a retrial. Both resulted in acquittals. No further judicial proceedings relating to responsibility for the attacks have been concluded. There have been two 'Pre-inquest' hearings into procedural matters [19] concerning pending Coroners Inquests into the deaths. An Inquest into the deaths of the victims opened at the Royal Courts of Justice in Central London on 11 October 2010. The Inquest will also inquire into alleged pre-attack failings by the police and MI5. There is no jury so that the verdict will be decided by the appointed Coroner, Lady Justice Hallett. Halleet was told that it would be "impossible" to reveal secret MI5 files about the attacks to the bereaved families or their lawyers.[20]

Victims' families have been granted legal aid to be represented. Survivors will have 'witness status' rather than 'properly interested person status', which would have allowed them a legal representative with powers to question witnesses. An Inquest into the deaths of the alleged perpetrators is to be held separately; their families have been refused legal aid and denied the right to appeal this decision. [21] 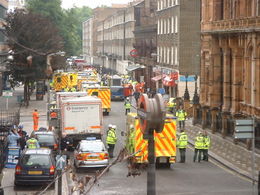 The UK attacks were a boon to the UK "counter-terrorism" industry. Tony Blair used the attacks to broaden the scope of "anti-terror" activity to encompass not just "violent extremists" but anyone promoting ideas that, as the BBC reported "could be linked to violence". His efforts to suppress people associated with "extremist" ideas faced trouble since officials could not agree on a definition of the word.[22] The UK's Terrorism Act, passed in 2000, amended in 2001, was amended in 2005, and then again in 2006.[How?][23]

The bombings were cited in 2006 by the UK ambassador to Saudi Arabia, who warned that "British lives on British streets" were at risk if the Serious Fraud Office's investigation into the Al-Yamamah arms deal continued. The memo asked: "If this caused another 7/7, how could we say our investigation is more important?".[24]

A week after the attacks, the infamous US Justice Department lawyer John Yoo wrote in an article entitled "Go on the Offensive against Terror", that "renewing the Patriot Act and staying the course at Guantanamo Bay remain important tools for gaining the intelligence that can prevent another Sept. 11". The same article declared that "another tool would have our intelligence agencies create a false terrorist organization. It could have its own websites, recruitment centers, training camps and fundraising operations."[25]

In 2008 the BBC produced a program as part of its 'Conspiracy Files' series. [33] The July 7 Truth Campaign declined to take part. Skeptics who did take part were rewarded with ad-hominem attacks which skirted round the facts of the July 7 case. The linked video is a small part of the program; the remainder is available from the linked page.

Those so attacked were Nick Kollerstrom[34] for 'Holocaust denial' and Anthony John Hill (aka Muad' dib) for his spiritual beliefs. The program set out to debunk Hill's video 'Ripple Effect' and the Wikipedia article on the Video[35], true to form, claims that it did just that.

6 September 2016 Robin  A rather disorganised overview of this deep event
The 7/7 bombings are comparable to 9/11, but Wikispooks has only a single page on the topic. Although outdated and jumbled, it contains thought provoking information which should assist in understanding this deep event.