Wikispooks is only very occasionally reported by commercially-controlled media.

In 2021, most editors have concentrated on improving the quality of existing pages rather than adding new pages.

Until 2021, actions/visit was generally less than 3, and never more than 4. Commensurate with this year's focus on improving page quality, today had an unprecedented 4.7 actions/visit.

The site now has 10,000 pages with descriptions. (Only 15,000 to go ...) Descriptions are particularly useful, since they automatically appear in multiple pages, so adding one description can improve many pages at once.

As if to underline yesterday's thought, the site was offline for 8 hours after an unidentified technical problem believed unrelated to Cyber Polygon.

Today the proportion of pages with a description passed 40%, for the first time ever. Congratulations all round![1] The backup file reached 10GB today, which is not all that big nowadays - all supporters are encouraged to download regular backups in case the site goes offline for any reason, which looks not unlikely in these uncertain times. 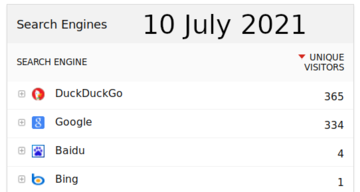 The first recorded day in which this site had more referrals from DuckDuckGo than Google.

The live statistics revealed censorship by Google, steadily increasing over the last few years, now at record levels - more visitors from DuckDuckGo than Google, probably for the first time ever.

Crowdfunding covered the webhosting bill of Wikispooks for the first time ever.

For the first time in many years, the proportion of stub pages on the site went below 50%, at around 11,500 pages! 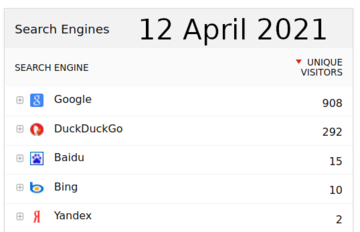 In Spring 2021, Google increased its censorship of this site. At the start of the year, around 1/2 of the site's traffic came from Google, by mid year, that proportion had shrunk to around 1/4.

The proportion of pages with a description surpassed 1/3 for the first time ever.[2]

The site had 84170 visitors in January, after which it was subjected to increasing censorship by Google.

2020 was Wikispooks busiest year ever, as remarked upon by commercially-controlled media.[3]

The site's bounce rate, consistently from 70-72% since 2014, began to gradually decline into the high 60s as editors focused less on increasing pagecount, more on completing existing pages.

After 10 years at the helm, User:Peter announced his retirement, passing control of the site to User:Robin, who set up a page on Patreon to crowdfund the site. As COVID-19 came to dominate the news agenda of commercially-controlled media, traffic went up to the site, which received 1.085 million visits in 2020.

Buy the "first they ignore you" dictum, Wikispooks advances to stage #2 with an article from Business Insider, which was published without contacting anyone from the website, entitled Conspiracy-theory encyclopedia Wikispooks is thriving during the coronavirus pandemic, seeing huge traffic gains from search engines.[3]

Exactly 10 years since the site went online, it experienced its busiest week ever after renewed interest in Lori Klausutis. A new daily record of 8900 visitors on 24 May was broken on 26 May when the site saw 9598 visitors.

Searches on "Eric Ciaramella" lead to the busiest day on record, with 8300 unique visitors.[4]

The project to assign the missing nationalities to all Bilderbergers is all but completed, leaving just one who was "in attendance" -- James A. Blay -- still of unknown nationality.