Tony Greenstein is a Jewish anti-Zionist and a founding member of Palestine Solidarity Campaign and Jews for Boycotting Israeli Goods. He is a long-standing anti-fascist activist and author of "The Fight Against Fascism in Brighton and the South Coast".[1]

Tony Greenstein has written for many publications including The Guardian's "Comment is Free", the Brighton Argus and Brighton and Hove Independent, Tribune, Labour Briefing and Weekly Worker. He also contributed the section of "Zionism" to Hodder & Stoughton's "The Essentials of Philosophy & Ethics" (2006) and most recently to the "Anti-Semitism Wars" (ed. Karl Sabbagh) on the Zionist anti-Semitism campaign in the Labour Party. He is a well known blogger and is currently working on a book "Zionism During the Holocaust".

Tony Greenstein is also an active trade unionist and a member of Brighton & Hove Trades Council, UNITE and UNISON. 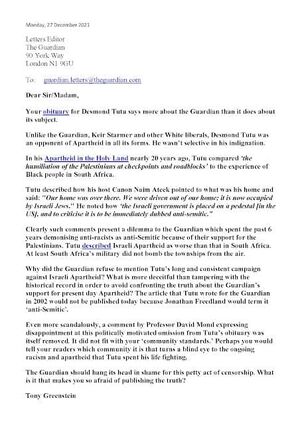 The Guardian should hang its head in shame

On 27 December 2021, Tony Greenstein wrote a letter to The Guardian:

Your obituary for Desmond Tutu says more about The Guardian than it does about its subject.[2]

Unlike The Guardian, Keir Starmer and other White Liberals, Desmond Tutu was an opponent of Apartheid in all its forms. He wasn't selective in his indignation.

In his "Apartheid in the Holy Land" nearly 20 years ago, Tutu compared "the humiliation of the Palestinians at checkpoints and roadblocks" to the experience of Black people in South Africa.

Tutu described how his host Canon Naim Ateek pointed to what was his home and said:

"Our home was over there. We were driven out of our home; it is now occupied by Israeli Jews." He noted how "the Israeli Government is placed on a pedestal (in the US), and to criticise it is to be immediately dubbed antisemitic."

Clearly such comments present a dilemma to The Guardian which spent the past six years demonising anti-racists as anti-Semitic because of their support for the Palestinians. Tutu described Israeli Apartheid as worse than that in South Africa. At least South Africa's military did not bomb the townships from the air.

Why did The Guardian refuse to mention Tutu's long and consistent campaign against Israeli Apartheid?[3] What is more deceitful than tampering with the historical method in order to avoid confronting the truth about The Guardian's support for present day Apartheid? The article that Tutu wrote for The Guardian in 2002 would not be published today because Jonathan Freedland would term it "anti-Semitic."[4]

Even more scandalously, a comment by Professor David Mond expressing disappointment at this politically motivated omission from Tutu's obituary was itself removed. It did not fit with your "community standards." Perhaps you would tell your readers which community it is that turns a blind eye to the ongoing racism and apartheid that Tutu spent his life fighting.

The Guardian should hang its head in shame for this petty act of censorship. What is it that makes you so afraid of publishing the truth?[5]

A Document by Tony Greenstein