Sven F. Kraemer has worked as a policy advisor to Douglas J. Feith, the Under Secretary of Defense for Policy[1].

Sven Kraemer's father was Fritz G. A. Kraemer, a veteran Pentagon policy advisor and sometime friend of Henry Kissinger.[1] In 1961 he studied at Harvard College. In 1964 he was awarded an MA from the University of California at Berkeley.

Kraemer was a guest lecturer at the Institute of World Politics, where he is teaching a course on "U.S. National Security Strategy, Emerging Threats, and Arms Control".

He has worked with Frank Carlucci, the US National Security Advisor.[2]

Kraemer was also project director for "The Soviet Union Fights The Cold War", a CD-ROM of Reagan administration documents produced by the American Foreign Policy Council. The page on the AFPC site promoting the CD features endorsements from prominent neo-conservative luminaries. For example, Donald Rumsfeld says the disc contains "Compelling details on the specifics of the Soviet threat to the world." [2]

In 2000 he was President of Global Challenge.

Kraemer was an instructor in political philosophy at the University of California, Berkeley[3]. 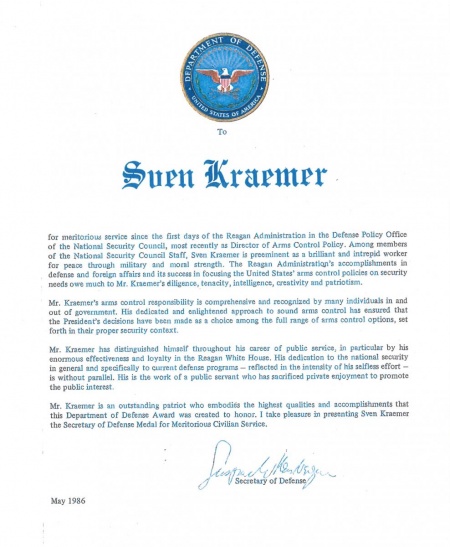 Sven Kraemer was given the Secretary of Defense Medal for Meritorious Civilian Service, th highest civilian award, for the first time awarded to a non-Department of Defense Official.[4]