Stella Moris-Smith Robertson is a South Africa-born human rights lawyer, who married Julian Assange in Belmarsh Prison on 23 March 2022.[1] She is fighting against Julian Assange's extradition from the United Kingdom to the United States.[2] 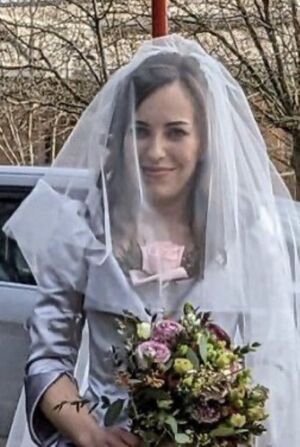 Heading down to London now for Julian and Stella's wedding. So happy for them; a little moment of happiness, romance and hope amidst the long dreary years of deprivation and nightmare.[3]

The defiant wedding of Julian and Stella today, in the face of a possible 175 years in a US jail for publishing the facts of US war crimes, is a triumph for love, a triumph for hope and a triumph for truth.

I plainly have superpowers, but this spite and viciousness even on their wedding day is absolutely typical of the cruel yet pathetic British authorities.

But it most certainly will not spoil the day; we already knew what they are and nothing has changed.[5]

I have the huge honour of being invited by Julian and Stella as one of the six people allowed to attend their wonderful wedding in Belmarsh Prison today.

But Julian has now been told I will not be allowed in as my presence would "endanger the security of the prison"!!! #Assange[6]

"Our children need their father back.

"Please help me make that happen."[7] 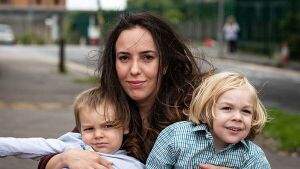 Thank you to everyone who has donated so far to help pay for Julian’s legal fees in his fight against extradition to the United States. We have now raised nearly £75,000 which is an enormous help in this important case. It lifts Julian's spirits to know that so many people support him.

Julian faces up to 175 years in prison in the US under the Espionage Act for publishing Wikileaks revelations about war crimes and human rights abuses during the wars in Iraq and Afghanistan. These were reported by hundreds of media outlets including The Guardian, Der Spiegel, The New York Times, The Washington Post and El Pais. Julian has been nominated for the Nobel Peace Prize numerous times and the information acted as a catalyst for the Arab Spring.

Julian's extradition team are currently hard at work making the final preparations for the extradition hearing which is due to start on Monday September 7 at the Old Bailey in London.

Julian’s solicitor is Gareth Peirce, the human rights lawyer, who has worked on many high profile cases including overturning the wrongful convictions of the Birmingham Six and Guildford Four. She also represented the family of Jean Charles de Menezes.

In court, Julian is represented by two of the country's leading extradition specialists. Edward Fitzgerald QC from Doughty Street Chambers represented Lauri Love and Gary McKinnon when they were faced with extradition to the US. In addition to his extradition expertise, Mark Summers QC has represented victims of torture and rendition. Working alongside them is is barrister Florence Iveson, another expert in extradition cases.

Also representing Julian is barrister Jennifer Robinson from Doughty Street Chambers who has been part of his team since 2010. Jen’s work focuses a lot of free speech and civil liberties.

Heading up his international defence team is another leading human rights lawyer, Baltasar Garzón. He attempted to extradite former Chilean dictator Augusto Pinochet from the UK to stand trial for torture. That set a legal precedent that former heads of state have no immunity from international crimes like torture.

Along with many other colleagues, they are drafting the final arguments, preparing the evidence and lining up witnesses. All of that will make up Julian’s defence in 10 days' time.

They will explain that the extradition should be thrown out because Julian is accused of a political offence, which is outside the terms of the UK-US Extradition Treaty. They will also show the numerous grave abuses of process have taken place during the case - and highlight the various statutory bars which apply to Julian being extradited.

They will argue that the extradition itself is an abuse of the UK extradition process. They will also argue the many reasons why extradition would not be compatible with Julian’s human rights.

Our case is strong and the democratic principles at stake could not be more important. However, the opponents have vast resources. Julian's lawyers have a mammoth task before them.

The legal process will no doubt drag on for a long time. For our family, this is just the first stage of an incredibly difficult journey that will be catastrophic if we fail to protect Julian from extradition.

The outcome of this case has huge repercussions for press freedom. It is the first time a publisher has been charged under the Espionage Act. It would be the first time any foreign journalist is prosecuted and extradited to the US for publishing truths they didn’t like. This is a political case and an attack on journalism. If Julian is extradited it means any journalist or publisher in the UK could face similar charges in the future.

Please continue to share details about the case and this fundraising appeal with anyone who you think might be interested. Inform friends and colleagues who are not as informed as you, and point them to authoritative statements by the United Nations, press freedom organisations like RSF and medical publications like The Lancet.

If you can afford it, please donate more than once. I will post updates as the case progresses. Thank you for supporting Julian.

Thank you from Julian in Belmarsh

Thank you to every one of you who has donated to our appeal so far. Reading all of your comments has been incredibly touching and inspiring.

Yesterday I was able to take our two sons Gabriel and Max to visit Julian in Belmarsh Prison for the first time in almost six months.

Julian wanted me to thank you personally for all of the help you have provided in covering his legal fees to fight the extradition to the USA, where he faces 175 years in prison.

The visit to Belmarsh was difficult for everyone and very stressful. We had to wear masks and visors and were not allowed to touch during a 20-minute meeting. He looked a lot thinner than the last time I had seen him. He is also in a lot of pain with a frozen shoulder and a sprained ankle.

However, it was great that Julian was able to see his children. Gabriel showed him that he can now recite the alphabet and count.

The total legal costs of fighting the extradition have already exceeded £500,000 even though all of the lawyers involved are working for a fraction of their usual rates – with most working for free.

We initially set a cautious target of £25,000. However, thanks to your generosity and support, we had raised that figure within 24 hours. Yesterday, we also reached our next target of £50,000 with pledges from over 1000 people.

We have now set a new target of £75,000. Any amount you can donate, no matter how small, will go towards Julian’s legal fight against extradition.

Please share this appeal with anyone who might be able to help. We have less than two weeks until the US extradition hearing begins on September 7 at the Old Bailey Court in London.