José Sanjenís Perdomo , a man of many aliases (including Joaquín Sanjenís, Sam Jenis, Sanjenis Perdomo , José Joaquín[1] and probably Luis Sanjenís), was a Chief of Police during Cuban President Carlos Prio's regime. Perdomo went into exile after Fidel Castro took power and was recruited by the CIA. Working from CIA/Miami station in the early 1960s, he recruited most of the members of Operation 40 (a CIA hit squad). He was working as night doorman at the Dakota on Dec. 8, 1980,[2] when John Lennon was killed, and told the police that Mark Chapman was the assassin - a fact unmentioned by commercially-controlled media until March 1987.[3][4]

Until 6 September 2015, English Wikipedia had a short article on "Jose Sanjenis Perdomo", but it was deleted after a 3-0 vote.[5] Their (much more informative) Spanish article was still online as of July 2021.[6]

After working in the Cuban police under the command of Batista, Perdomo went into exile in the US after Fidel Castro took power. He joined the CIA, to whom he gave lists of skilled and like-minded people who could be trusted enough to take part in Operation 40. He was a member of Brigade 2506 during the Bay of Pigs Invasion in 1961.[7] His handler was Frank Sturgis.[8]

Jim Gaines describes Perdomo as an "anti-Castro Cuban" who discussed with Chapman about the Bay of Pigs Invasion and the Assassination of John F. Kennedy".[9]

Larry Hancock in his 2006 book, Someone Would Have Talked reveals that Jose Sanjenis Perdomo was closely involved with David Morales in 1962 and 1963, and that "[Sanjenis], the individual in charge of Operation 40, was actually the number one exile in the AMOT organization trained and prepared by David Morales."[10] Perdomo chose most of the original 40(?) members of this CIA assassination squad most of whom were Cubans. He was a close associate with Operation 40 member and Watergate burglar, Frank Sturgis[11], who claimed that Sanjenis died of natural causes in 1974. According to Sturgis, the CIA nurtured Sanjenis's anonymity and his family was not notified of his alleged death until after the funeral. This was however never confirmed by any other source.[12] 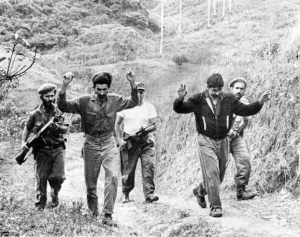 In the Bay of Pigs Invasion, Perdomo was a member of Brigade 2506. [13] He worked closely with Watergate plumber, Frank Sturgis. The relationship between Sanjenís and Sturgis began in 1959 or 1960, according Hinckle and Turner, when the CIA began planning the Bay of Pigs invasion.[14]

Frank Sturgis claimed that Sanjenis died of natural causes in 1974. According to Sturgis, the CIA nurtured Sanjenis's anonymity and his family was not notified of his alleged death until after the funeral. This was however never confirmed by any other source[12] and may have been an attempt to cover his secret arrangement whereby "Sanjenis got Sturgis a CIA maildrop and gave him the right phone numbers, and Sturgis agreed to coordinate his own operations with Sanjenis and work on a contract basis on special agency assignments."[15] 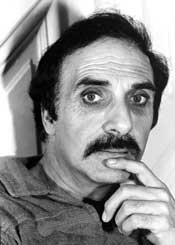 Jose Sanjenis Perdomo was working as night doorman and was outside the Dakota on Dec. 8, 1980, the night John Lennon was killed.[2] He was at the crime scene when the shooting occurred and reportedly screamed "Leave! Get out of here!"[17] before he asked Mark David Chapman immediately afterwards if he knew what he had just done. Chapman reportedly replied that he had just shot John Lennon. Perdomo was the one who identified Chapman as the assailant.[18][12]

Initially Perdomo was mistakenly referred to as Jay Hastings, the bearded, burly desk clerk who worked in the lobby, and who tried to give Lennon a tourniquet.[17]

Rolling Stone's special issue memorializing Lennon, gives the names of all the other witnesses of the assassination, but Perdomo is referred to only as “the doorman stationed outside” and “the other doorman”.[18] No corporate media mentioned Perdomo's name until March 1987, when James R. Gaines wrote In the Shadows a Killer Waited for People magazine, which states that: "Chapman had only the Dakota's night doorman, José Perdomo, to keep him company. José was an anti-Castro Cuban, and they talked that night of the Bay of Pigs and the assassination of John F. Kennedy."[19]

1 September 2016 Robin  A sound introduction to this shady character
Perdomo played a key role in Operation 40 - the CIA hit squad run out of Ted Shackley's Miami station - connected to the JFK Assassination. His witnessing the assassination of John Lennon is therefore remarkable. Wikipedia deleted their page on him in 2015...