James "Jim" Hoagland was a panelist for the discussion about Restoring Confidence In Leadership And Institutions at the 1993 Bilderberg.[1]

After graduation he joined the US Navy and saw action in the Pacific during World War II. After his wartime service he joined the Graybar Electric Company and was appointed President and CEO in 1980. In 1982 the Corporate Office moved from New York City to Clayton, MO. He served as the President of the Board of Directors for the St. Luke's Hospital in Chesterfield, MO., as a member of the Executive Committee of the Southern Fruit and Land Company, and on the Board of Directors of the LaClede Gas Company and the Boatmen's Bank in St. Louis.[2] 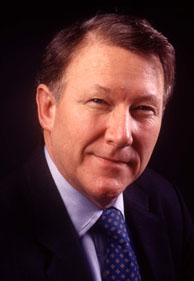 +
Display lifespan
Born 22 January 1940 +
Has almaMater
University of South Carolina +, University of Aix-en-Provence +  and Columbia University +
Has bilderbergCount
4 +
Has birthPlace
South Carolina +  and USA +
Has cercleCount
0 +
Has fullPageName
Jim Hoagland +
Has fullPageNamee
Jim_Hoagland +
Has historycommons
http://www.historycommons.org/entity.jsp?entity=jim hoagland 1 +
Has image