Criticised for not meeting victims and local residents at the scene, Prime Minister Theresa May was quick to announce there would be a judge-led public inquiry into the tragedy.[1]

In July 2017, George Monbiot wrote a Guardian article entitled "The Grenfell inquiry will be a stitch-up. Here's why" and followed this with a video claiming the Grenfell Tower fire is a case of "mass murder".[3]

In August 2017, Jeremy Corbyn wrote urging the Prime Minister to rethink the terms of reference of the Grenfell Tower fire inquiry.[4]

The fire started shortly before 1am local time. Hundreds of firefighters and 45 fire engines were involved in efforts to control the fire. Firefighters were trying to control pockets of fire on the higher floors after most of the rest of the building had been gutted. Residents of surrounding buildings were evacuated out of concerns that the tower could collapse, though the building was later determined to still be structurally sound.[5] 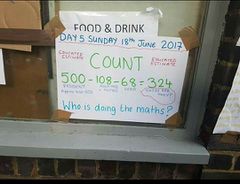 Death toll: who is doing the maths?

An exact figure for residents is unknown but it is a 24-storey tower block and there are thought to be around 24 people per floor. This would leave the total at around 600 (576) although authorities have no idea how many people were in their homes during the fire.

"Several hundred would have been in there. It’s a question of establishing how many people were in there at the time of the fire.[6]

Many were killed, and many residents remain missing.[7] Sixty-five were rescued by firefighters. Seventy-four people were confirmed to be in five hospitals across London, twenty of whom were in a critical condition. Ongoing fires on the upper floors and fears of structural collapse hindered the search and recovery effort.[8]

The cause of the fire was a Hotpoint fridge-freezer fire in Flat 16 on the fourth floor. The fridge was by the kitchen window and before the fire was put out it spread to the combustible window frames and the combustible cladding attached to the exterior of the flat. Residents had reported 'power surges' in the building which may have caused the fridge-freezer to explode. The Mayor of London Sadiq Khan criticised the safety instructions telling people to stay in their flats in particular.[9] Since 2013 the residents' organisation, Grenfell Action Group, had repeatedly expressed concern about fire safety and had warned in November 2016 that only a catastrophic fire would finally force the block's management to treat fire precautions and maintenance of fire-related systems to a proper standard.[10]

Celebrity chef Jamie Oliver offered free food and shelter to victims of the fire at his nearby restaurant in Frank Lowy's Westfield Shopping Centre in White City.[11]