Westfield London is a shopping centre in White City in the London Borough of Hammersmith and Fulham. The centre was developed by Frank Lowy's Westfield Group at a cost of £1.6bn,[1][2] on a site bounded by the West Cross Route (A3220), the Westway (A40) and Wood Lane (A219). It opened on 30 October 2008 and became the largest covered shopping development in the capital, dethroning the Whitgift Centre in Croydon.[3]

The site is part of the White City district, where several other large scale development projects are under way or in the planning stages. The development is on a large brownfield site, part of which was once the location of the 1908 Franco-British Exhibition; the initial site clearance demolished the set of halls still remaining from the exhibition (their cheap-to-build, white-painted blank facades are said to be the origin of the name "White City"). Much of the site was in use as a railway depot excavated to a lower level and built over.

The centre is noted for its size: it has a retail floor area of 150,000 m² (1.615m ft²), the equivalent of about 30 football pitches. At the time of its opening it was reported to be the second largest commercial centre in the UK (after the MetroCentre near Newcastle upon Tyne).

In March 2013, Mayor of London, Boris Johnson, announced that the Metropolitan Police were to set up a new base in Westfield Shopping Centre following the closure of Shepherd’s Bush Police Station front counter. In his Police and Crime Plan, designed to save £500 million by 2015, some 2,600 officers were to be redeployed in Safer Neighbourhood Teams across the Met – including 92 more in the borough taking the total up to 139.

"Londoners have repeatedly told us that putting more officers on the streets is their top priority, not keeping them hidden behind desks in offices which the public rarely set foot in. By getting our police out onto the streets and into the heart of their communities, we will drive down crime and boost confidence, and at the same time build a Met Police Service which is leaner, more efficient and more effective."[4]

The initial plan for a shopping centre at this location was developed by a consortium, the largest company involved being the UK division of Australian property company Multiplex. However, due to heavy financial losses in other ventures, including the construction of the new Wembley Stadium, Multiplex was forced to sell its stake to another Australian company (and competitor), Westfield Group.[5]

The development was built by Westfield Construction, the developer's own construction arm and was delivered on schedule.[6] Robert Bird Group were the structural engineers for the job.[7] The roof was designed by Knippers Helbig Advanced Engineering (Stuttgart, Germany).[8] The project took five years to build, employing 8,000 people.[9] The Project Director was John Roberts.

There was a structural/organisational challenge relating to the White City depot of the Central line Underground railway. It covered a large proportion of the site, and had to be kept fully operational while being excavated beneath and relocated bit by bit at a lower level to allow the centre to make use of its previous location.

There were also considerable precautions needed due to the expectation of finding unexploded bombs from raids on a local munitions factory during the World War II blitz.

On 16 February 2012, Hammersmith and Fulham Council approved a 9 hectare extension to the north of the existing site. The north side of the extension is bounded by the existing railway viaduct, and the south side of the extension is adjunct to the present shopping centre. The extension will replace the industrial estate which currently occupies the area, which is divided by Ariel Way. The planned extension includes 51,000 square metres (550,000 sq ft) of retail space, offices, new streets, public spaces, and approximately 1,522 new homes. The department store John Lewis is expected to be the occupant of an 'anchor store' within the extension. The development ranges from four to twelve storeys high with one building at 20 storeys. Building work began in 2014 and will be phased through 2017.[10] The work also includes modifications to Shepherd's Bush Overground Station, relocation of the bus station and reuse of the Dimco Buildings, and pedestrian links on the east side of the site connecting Hammersmith & Fulham with Kensington and Chelsea.[11][12][13]

This substantial new development has been criticised. The impact Westfield London will have is not yet fully understood, but it is anticipated that the centre will attract trade that otherwise might have gone to the West End and may also have a strong negative impact on nearby Kensington High Street.[17] The development has also pushed up rents in the Shepherds Bush area, which is expected to impact on the value retail offer in the area, with many businesses as well as the Shepherds Bush Market expected to suffer.[18] Others have criticised the centre's "clone stores".

In 2009, it was nominated for the "Carbuncle Cup", an architecture prize, given annually by the magazine Building Design to "the ugliest building in the United Kingdom completed in the last 12 months". 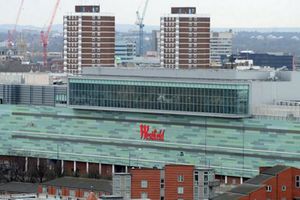