Franklin Delano Roosevelt, often only FDR, was the 32nd president of the United States from 1933 until his death in 1945. A member of the Democratic Party, he won a record four presidential elections and became a central figure in world events during the first half of the 20th century. Roosevelt directed the federal government during most of the Great Depression, implementing his New Deal domestic agenda in response to the worst economic crisis in U.S. history. 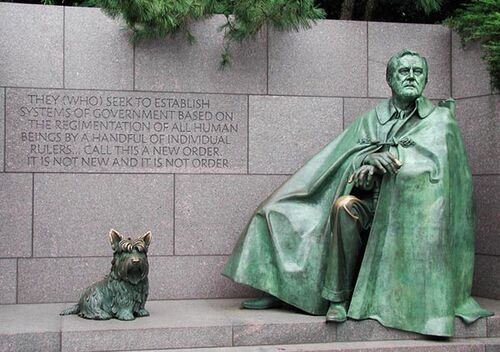 From the FDR memorial, text reads: "They [who] seek to establish systems of government based on the regimentation of all human beings by a handful of individual rulers...call this a new order. It is not new and it is not order."[1] March 15, 1941 — full speech[2]

Franklin D. Roosevelt started something he christened the "The Good Neighbor Policy" towards Latin America. While seemingly benign, it was entirely compatible with the Root doctrine. It simply required that Washington substitute support of local dictators for its previous policy of invasions and occupations, the latter being the ultimate forms of interference forbidden by the new policy. The historian William Keylor[3] ascribes the adoption of this new policy to Washington's embarrassment at the obvious similarity between its previous invasions and occupations of Latin America and the then current aggression of Japan in China. The parallel was too obvious, and compelled the implementation of a new way to maintain hegemony in the hemisphere.[4]

Washington relinquished, at least on paper, its right to intervene. For direct forms of dominance, it substituted indirect ones, reminiscent of but less formal than those employed in British indirect rule in Africa. Central to this new scheme was support-economic, military and diplomatic-for local autocrats-for their currencies, their national constabularies, and their personal greed. In return, these autocrats suppressed local communists and radicals, protected American business, and performed other favors when called upon to do so. The good neighbor policy and the Root doctrine not only accomplished the same essential goals, but the latter was generally more cost effective and presented a smoother surface. No need to invade to change unwanted regimes. Better to support the local military that would make the changes for you.

A Quote by Franklin D. Roosevelt

An appointment by Franklin D. Roosevelt