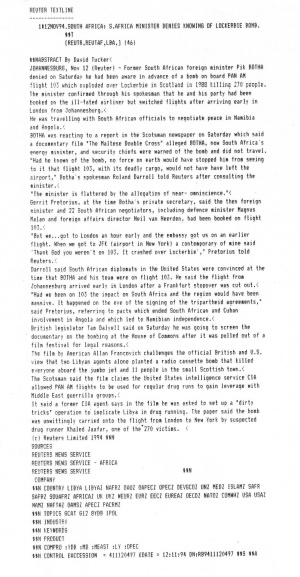 Former South African foreign minister Pik Botha denied on Saturday he had been aware in advance of a bomb on board Pan Am Flight 103 which exploded over Lockerbie in Scotland in 1988 killing 270 people.

The minister confirmed through his spokesman that he and his party had been booked on the ill-fated airliner but switched flights after arriving early in London from Johannesburg.

He was travelling with South African officials to negotiate peace in Namibia and Angola.

Botha was reacting to a report in The Scotsman newspaper on Saturday which said a documentary film "The Maltese Double Cross" alleged Botha, now South Africa's energy minister, and security chiefs were warned of the bomb and did not travel:

"Had he known of the bomb, no force on earth would have stopped him from seeing to it that flight 103, with its deadly cargo, would not have left the airport," Botha's spokesman Roland Darroll told Reuters after consulting the minister.

"The minister is flattered by the allegation of near-omniscience."

"But we...got to London an hour early and the embassy got us on an earlier flight.*** When we got to JFK (airport in New York) a contemporary of mine said:

'Thank God you weren't on 103. It crashed over Lockerbie'," Pretorius told Reuters.

Darroll said South African diplomats in the United States were convinced at the time that Botha and his team were on flight 103. He said the flight from Johannesburg arrived early in London after a Frankfurt stopover was cut out:

"Had we been on 103 the impact on South Africa and the region would have been massive. It happened on the eve of the signing of the tripartheid agreements," said Pretorius, referring to pacts which ended South African and Cuban involvement in Angola and which led to Namibian independence.

British legislator, Tam Dalyell said on Saturday he was going to screen the documentary on the bombing at the House of Commons after it was pulled out of a film festival for legal reasons.[1] The film by American Allan Francovich challenges the official British and US view that two Libyan agents alone planted a radio cassette bomb that killed everyone aboard the jumbo jet and 11 people in the small Scottish town.

The Scotsman said the film claims the United States intelligence service CIA allowed Pan Am flights to be used for regular drug runs to gain leverage with Middle East guerrilla groups. It said a former CIA agent says in the film he was asked to set up a "dirty tricks" operation to implicate Libya in drug running. The paper said the bomb was unwittingly carried onto the flight from London to New York by suspected drug runner Khaled Jaafar, one of the 270 victims.[2]