The Save the Children Fund,[1] commonly known as Save the Children, is an international non-governmental organisation that promotes children's rights, provides relief and helps support children in developing countries.[2] It was established in the United Kingdom in 1919 in order to improve the lives of children through better education, health care, and economic opportunities, as well as providing emergency aid in natural disasters, war, and other conflicts.

In addition to the UK organisation, there are 29 other national STC organisations who are members of Save the Children International, a global network of nonprofit organisations supporting local partners in over 120 countries around the world.

Save the Children promotes policy changes in order to gain more rights for young people[3] especially by enforcing the UN Declaration of the Rights of the Child. Alliance members coordinate emergency-relief efforts, helping to protect children from the effects of war and violence. Save the Children has general consultative status with the United Nations Economic and Social Council (ECOSOC).

In 2011, Save the Children was exposed in an operation involving a fake doctor with links to the US Central Intelligence Agency (CIA).

The doctor, Shakil Afridi, ran a fake polio vaccination campaign in the northwestern city of Abbottabad, allegedly to confirm the presence of former al Qaeda leader Osama Bin Laden for the CIA. (According to the official narrative, Bin Laden was hiding in Pakistan.) In 2012, Afridi was arrested by Pakistani security forces and jailed for treason.

In 2015, Pakistan ordered the organization out of the country. "We have been monitoring various international and local NGOs and Save the Children was found working against the interest of Pakistan," an official from the Interior Ministry stated.[4] But the Interior Minister soon had to lift this ban after international (including from the U.S. State Department) and domestic (NGO) pressure.[5][6]

The international board oversees STC's global strategy and programmes. Global board members are all from big corporations, including hedge funds, junk food peddlers, oil companies etc[7]

In February 2018 former Save the Children UK chief executive Justin Forsyth resigned from UNICEF to avoid image damage to the charities. Three complaints of inappropriate behaviour towards female staff were made against Forsyth whilst he worked at Save the Children UK.[8] 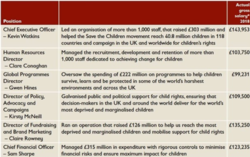 Former CEO Helle Thorning-Schmidt, had "the global experience and drive" to "achieve the most for poor children". For this, she received £284,000 a year plus expenses[9]. Thorning-Schmidt was member of Parliament and the Leader of the Social Democratic Party for 10 years. She was a Member of the European Parliament from 1999 to 2004, and previously worked as an international adviser to the Confederation of Trade Unions.

In 2014 Save the Children responded to over 103 humanitarian crises around the world reaching over 4 million children affected by conflicts, disease outbreaks, floods and cyclones. To be noted is that these areas are also of interest to the British government:

In November 2014, Tony Blair was honoured with STC's Global Legacy award despite the fact he was responsible for pushing a decade of sanctions against Iraq, before invading the country in 2003, actions which killed hundred of thousands of children.

In an internal STC letter signed by almost 200 members of staff, they branded the award “morally reprehensible” and a “betrayal” and called for it to be withdrawn. They wrote that they felt it also endangered the charity’s “credibility globally” and demanded an investigation into their decision-making process.

The award also sparked speculation over the charity’s independence, in light of its links to the former British Prime Minister. Justin Forsyth, the UK chief executive of STC, used to be a Special Adviser to Blair, while Jonathan Powell, who is also on the STC board, was his former chief of staff.

Meanwhile, director of policy and advocacy Brendan Cox was a Special Adviser to Gordon Brown.

Richard Warburton, director of media for STC, denied the problem: “Save the Children has, and always will be, an impartial organisation that is above party politics. The background of our staff and their previous employment does not affect the organisation’s impartiality. We have strong links across the political spectrum.”

Asked if Sir Alan Parker, the chairman of Save the Children UK and PR company Brunswick Communications, a Blair associate, had put the former PM forward for the prize, he confirmed he was “not part of the process”.