Trans woman Chelsea Manning, formerly Bradley Manning, is a former US Army intelligence analyst who was imprisoned in May 2010 after telling Adrian Lamo she had leaked to Wikileaks 251,287 US diplomatic cables, a video of the "Collateral Murder" in Baghdad, along with a video of the "Granai Massacre" in Afghanistan and 482,832 Army reports that came to be known as the "Iraq War Logs" and the "Afghan War Diary".[1]

Chelsea Manning was convicted by court-martial in July 2013 of violations of the Espionage Act and other offences, and was sentenced to 35 years imprisonment at the maximum-security US Disciplinary Barracks at Fort Leavenworth.[2] Manning was released in May 2017 after outgoing President Obama commuted her sentence to 7 years.[3]

In March 2019, Chelsea Manning was jailed at the Alexandria Detention Center in Virginia for contempt for refusing a subpoena to testify in a secret US Grand Jury investigating WikiLeaks founder Julian Assange.[4] On 12 March 2020, US District Judge Anthony Trenga released Chelsea Manning from detainment after concluding that the Grand Jury that she had been subpoenaed to testify before no longer needed her, since it was being disbanded.[5]

The release of Manning came after the US government tried to break her to the point of suicide.[6] Nils Melzer, the UN Special Rapporteur on Torture, had written a letter to the US government late in 2019 indicating that Manning’s imprisonment amounted to torture.[7][8]

Adrian Lamo: ex-Hacker who reported Bradley Manning to the FBI

In May 2010, Wired magazine reported that Manning initiated a series of online chats with former hacker Adrian Lamo after a story on Lamo was published at Wired.com. In the chat logs, Manning explained his growing disillusionment with the US Army and foreign policy. Manning reportedly said that the diplomatic documents expose "almost criminal political back dealings" and that they explain "how the first world exploits the third, in detail". He said that he hoped the release of the videos and documents would lead to "worldwide discussion, debates, and reforms". Manning reportedly wrote:

"Everywhere there’s a U.S. post, there’s a diplomatic scandal that will be revealed."[9]

He gave one example of being assigned the task of evaluating the arrest of Iraqis for allegedly publishing "anti Iraq" literature, only to discover that the writings were in fact scholarly critique of corruption in the cabinet of Iraq Prime Minister Al-Maliki titled "Where Did the Money Go?".[10] He reportedly said to Lamo:

"I immediately took that information and ran to the officer to explain what was going on. He didn’t want to hear any of it. He told me to shut up and explain how we could assist the FPs in finding MORE detainees."

The chats continued over several days, during which Manning claimed that he was responsible for leaking classified material to the whistleblower site Wikileaks. Adrian Lamo tipped off the FBI and the Army about Manning's claims, and on 26 May 2010, Manning was seized by Army authorities and put into pre-trial detention in Kuwait. He remained in Kuwait while the Army Criminal Investigation Division and other agencies investigate whether he leaked classified information and determine if he should be charged with any crime. [11]

Wikileaks said "allegations in Wired that we have been sent 260,000 classified US embassy cables are, as far as we can tell, incorrect".[12] Wikileaks said that they are unable as yet to confirm whether or not Manning was actually the source of the video, stating "we never collect personal information on our sources", but saying also that "if Brad Manning is the whistleblower then, without doubt, he's a national hero" [13] and "we have taken steps to arrange for his protection and legal defence".[14] 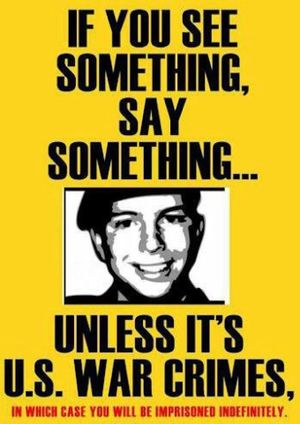 Pentagon Papers whistleblower Daniel Ellsberg stated in an interview that "If Bradley Manning has done what he is alleged to have done, I congratulate him. He has used his opportunities very well. He has upheld his oath of office to support the Constitution. It so happens that enlisted men also take an oath to obey the orders of superiors. Officers don’t make that oath, only to the Constitution. But sometimes the oath to the Constitution and oath to superiors are in conflict" while Wikileaks "is serving our democracy and serving our rule of law precisely by challenging the secrecy regulations, which are not laws in most cases, in this country." On the issue of national security considerations for the U.S., Ellsberg added that

"..any serious risk to that national security is extremely low. There may be 260,000 diplomatic cables. It’s very hard to think of any of that which could be plausibly described as a national security risk. Will it embarrass diplomatic relationships? Sure, very likely—all to the good of our democratic functioning..[Wikileaks] has not yet put out anything that hurt anybody’s national security.

"..having read a hell of a lot of diplomatic cables, I would confidently make the judgment that very little, less than one percent, one percent perhaps, can honestly be said to endanger national security. That’s distinct [from the percentage that could cause] embarrassment—very serious embarrassment, [if people] realize that we are aware of highly murderous and corrupt operations by people and that we are supporting them. It is very seriously embarrassing..If the choice is between putting none of them out, as the State Department would like, and putting all of them out, I definitely feel our national security would be improved if they were put out. Between those two choices, I would rather see them all of them out. It would help understand our own foreign policy and give us the chance to improve it democratically. I hope they are out, I hope we get to see them.[15]

The Salon article by Glenn Greenwald and referenced below is a compelling account of the whole affair to date (18 June 2010). Adrian Lamo is exposed as a despicable, publicity-seeking, hypocrite. Kevin Poulsen, Wired Magazine's 'Threat level' blog editor who published selected portions of the Lamo-Manning chat logs, does not come out of events to date smelling of roses either.[16]

Manning transferred to the US

BAGHDAD, Iraq – U.S. Army officials transferred PFC Bradley Manning from the Theater Field Confinement Facility in Kuwait to the Marine Corps Base Quantico Brig in Quantico, Virginia, on July 29. Manning remains in pretrial confinement pending an Article 32 investigation into the charges preferred against him on July 5. Manning was transferred because of the potential for lengthy continued pretrial confinement given the complexity of the charges and ongoing investigation. The field confinement facility in Kuwait is designed for short-term confinement. [17]

The location of the Quantico brig: Map