Document:On the Pavement with Wikileaks 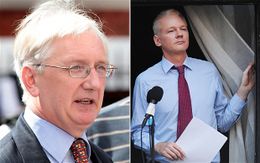 ★ Start a Discussion about this document
On the Pavement with Wikileaks

Entirely unexpectedly, I have been down in London this last three days outside and around the Ecuadorean Embassy, following WikiLeaks’ announcement that their sources indicate Julian might be expelled within hours or days. Plainly Julian’s position within the Embassy has deteriorated fundamentally, to the extent he is now treated openly as a closely guarded prisoner. I still have not myself been granted permission to visit him and he is now very isolated.

Nothing has happened so far this weekend, though I stated from the start that if the police were going to move in the most likely time would be 4am on Monday morning. There is a thought that the massive media presence occasioned by Wikileaks’ announcement may have succeeded in deterring President Moreno from the expulsion. Let us hope that will prove the case.

I am very exhausted, having been more or less on 24 hour watch for three days. It was also somewhat difficult to tell Nadira her birthday celebration had shifted without notice from a restaurant in Edinburgh to a wet pavement in London. But I was very pleased to have a very fruitful in depth conversation with Kristinn Hrafnsson, editor in chief of Wikileaks. Our thoughts ran along these lines, and as this does not involve secrets but rather media handling, I see no harm in sharing these thoughts with you.

When Julian does leave the Embassy, whatever the circumstances in which he does that, it will be for a day or two the largest media story in the world and undoubtedly will lead all the news bulletins across every major country. The odds are that he will be leaving and facing a fight against extradition to the United States, on charges arising from the Chelsea Manning releases which revealed a huge amount about US war crimes and other illegal acts.

It will be very important to try to focus a hostile media on why it is Julian is actually wanted for extradition. Not for the non-existent collusion with Russia to assist Trump, which is an entirely fake narrative. Not for meetings with Manafort which never happened. Not for the allegations in Sweden which fell apart immediately they were subject to rational scrutiny.[1] And not for any nonsense about whether he hacked the communications in the Embassy or cleaned up the cat litter.

This is not going to be an easy task because pretty well all of the Western media is going to want to focus on these false anti-Assange narratives, and they will be determined to give as little attention as possible to the fact he is a publisher facing trial for publishing leaked state documents which revealed state wrongdoing. It is a classic and fundamental issue of freedom of speech and freedom of the press. Drawing together a team that can get this message across in such MSM windows as are afforded, as well as through social media, is an important task. The team needs to be in readiness and to be backed by a suitable support infrastructure that can be dusted off and sprung into action. The public framing of Julian’s position will undoubtedly impact on the final outcome; that is why the MSM have put in such a consistent effort to demonise one of the most interesting figures and original thinkers of our time.

If the balloon really had gone up this weekend, we would have been woefully unprepared to deal with the task of explaining the true story. If nothing else, this weekend’s alarm has been very helpful in concentrating minds on the size of the task.

"Have to head back to London to help in light of Ecuadorian betrayal and Julian's sad arrest. The fight is now on whether a journalist should be imprisoned for publishing documents from a whistleblower on war crimes."[2]

"Ecuador has illegally terminated Assange political asylum in violation of international law. He was arrested by the British police inside the Ecuadorian embassy minutes ago."[3]

Publishing a video of the arrest, RT reported:

"WikiLeaks founder Julian Assange has been evicted from the Ecuadorian Embassy in London where he has spent the last six years. Ecuador's president Lenin Moreno has announced that the country has withdrawn asylum from Assange."[4]