From June 2nd, 2020 on, protests spread nationwide in the US after pictures of a sadistic murder by US police surfaced. President Trump vowed to use the military if widespread violence wasn't quelled, as peaceful protesters just outside the White House gates were dispersed with tear gas.[1]

The protests have been called a colour revolution targeted against Trump. [2]

Apparently after the initial violent protests ended, fireworks at night started to appear in American cities.[3][4] The size of the displays and intensity of the explosions are generally described far beyond what would be available to regular consumers.[5] Some social media posts speculated that this is a targeted attack to disrupt the sleeping patterns of these neighborhoods, exhaust people and bring the protests to an end.[6][7] The situation may be attributable to a bigger black market this year, since the manufacturers, who have ~75% of their yearly revenue around the 4th of July, are under duress in 2020 since a significant number of festivities are cancelled,[8] but observations by social media commentators point toward some organisation of the distribution throughout the country.[9]

George Soros' Open Society Foundations, has spent significant resources on putting people in place that play a supporting role in the protest movement. In addition to funding various Democrats in state and congressional races, Soros invested heavily in local elections. He specifically targeted district attorneys, who in the US make all the prosecutorial decisions on a local level. In 2018, he invested more than $2.7 million in DA races in California[10].

During the demonstrations, piles of bricks were mysteriously placed around the protest sites[17]. 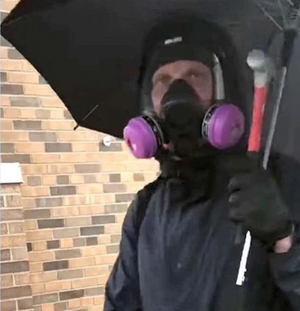 In June 2020 in Minneapolis a man dressed in black, carrying an umbrella and wearing a mask, gloves, and boots, was caught by peaceful protestors breaking shop windows with a hammer shortly before it was set ablaze[18]. When asked if he is a policeman, Umbrella Man replied: “Does it matter?” and ducked through an open gate and across a parking lot while refusing to answer questions or remove his mask.[19] After initially denying that he was employed, the Police Department issued a statement saying one of its officers, Jacob Pederson, had been misidentified by social media activists as the man seen in the video, saying he had an alibi.[20]

During the riots protestors were killed in incidents described as "vehicular terror attacks". Wikipedia documents them[21], and overplays the "terroristic" element. As they occurred on roads at night they were arguably accidents waiting to happen but the terroristic element was nevertheless promoted.

The police attacked over 100 journalists, blinding a few.[26] Some police forces also deliberately followed journalists and slashed their tires in "preparation for curbing riot control".[27][28]