Bjarni Benediktsson was Prime Minister of Iceland for most of the 1960s. He was the main responsible for Iceland joining NATO in 1949 and for giving the United States Air Force a lease on Keflavík Airport.

Benediktsson died in office from a fire which also killed his wife and grandson.

Bjarni studied constitutional law and became a professor at the University of Iceland at age 24. He was elected to the city council in Reykjavík in 1934 as a member of the Independence Party and from 1940 to 1947 was mayor of the city. 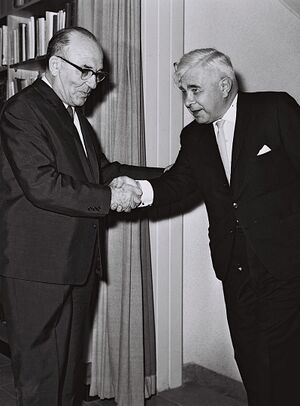 Bjarni (right) with Prime Minister of Israel Levi Eshkol in 1964.

In 1947 he became Foreign Minister and served in various posts in cabinets until 1956. Bjarni was mainly responsible for Iceland joining NATO in 1949, against significant opposition, and for giving the United States Air Force a lease on Keflavík Airport near Reykjavík, which was of major strategic importance during the Cold War.[1]

Bjarni was caricatured by the Nobel prize winning writer Halldór Laxness in his 1948 novel Atómstöðin (The Atom Station).[1]

In 1956, when the left-wing parties formed a coalition government, Bjarni, out of office, became editor of Morgunblaðið, a leading conservative newspaper.

In 1959, when the Independence Party formed a coalition government with the Social Democrats, Bjarni became Minister of Justice. He was speaker of the Althing in 1959.[2] Two years later he was elected chairman of the Independence Party and in 1963 he took over from Ólafur Thors as Prime Minister. He served in this position until his death, which was caused by a fire at a government summer house at Þingvellir; his wife and grandson also perished in the blaze.

Bjarni was the father of Björn Bjarnason and Valgerður Bjarnadóttir, as well as the father-in-law of Vilmundur Gylfason. Bjarni was the great-uncle of his namesake Bjarni Benediktsson, who became Prime Minister in January 2017.

This page imported content from Wikipedia on 04.04.2022.
Wikipedia is not affiliated with Wikispooks.   Original page source here
Retrieved from "https://wikispooks.com/w/index.php?title=Bjarni_Benediktsson&oldid=243634"
Categories: