The University of Iceland (Háskóli Íslands) is a public research university in Reykjavík, Iceland and the country's oldest and largest institution of higher education. Founded in 1911, it has grown steadily from a small civil servants' school to a modern comprehensive university, providing instruction for about 14,000 students in twenty-five faculties. Teaching and research is conducted in social sciences, humanities, law, medicine, natural sciences, engineering and teacher education. It has a campus concentrated around Suðurgata street in central Reykjavík, with additional facilities located in nearby areas as well as in the countryside.

The University of Iceland was founded by the Alþingi on June 17, 1911, uniting three former post-secondary institutions: Prestaskólinn, Læknaskólinn and Lagaskólinn, which taught theology, medicine and law, respectively. The university originally had only faculties for these three fields, in addition to a faculty of humanities. During its first year of operation 45 students were enrolled. The first rector of the university was Björn M. Ólsen, a professor in the faculty of humanities.[1] 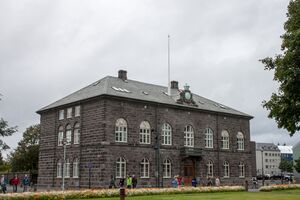 The university played an important role in the construction of the Icelandic nation-state and was perceived by Icelanders as an important stepping stone towards full independence. Demands for a national Icelandic university stretch as far back as to the first session of the elected assembly of Althingi in 1845. Icelandic nationalist leaders petitioned Denmark at the time to create a "national school" to achieve cultural and material progress, but also to make sure that the education that Icelanders obtained was sufficiently national in character.

In recent years there has been some major restructuring. In 2008 the university was divided into five different schools. Simultaneously, the Iceland University of Education was merged with the University of Iceland to become its School of Education. Increased competition from local colleges has encouraged the university to greatly improve its marketing strategies, which had previously been deemed unnecessary.

On 21 January 2021, a broken main water pipe serving the Vesturbær neighbourhood of Reykjavík flooded the campus with over 2,000 tonnes of water, causing damage to buildings Háskólatorg and Gimli. [2]