The Working Group on Syria Propaganda and Media (SPM) is made up of academics and PhD students from a variety of UK universities. SPM was convened by Piers Robinson and is critical of the UK commercially-controlled media reporting about Syria, and has in turn been criticised by them.

SPM has no entry on Wikipedia. Its own website declares:[1]

This working group aims to facilitate research and debate with respect to the 2011-present war in Syria and the role of both media and propaganda. In all wars, truth and reality are profoundly contested whilst media frequently struggle to maintain independence and autonomy in the face of propaganda strategies pursued by combatants and participants, both internal and external. The war in Syria is no exception. At present there exists an urgent need for rigorous academic analysis of media reporting of this war, the role that propaganda has played in terms of shaping perceptions of the conflict and how these relate to broader geo-strategic process within the ME region and beyond. With these needs in mind, this working group has been established in order to encourage networking amongst academics as well as the development of conference papers and panels, articles and research monographs, and the development of research funding bids. We also aim to provide a source of reliable, informed and timely analysis for journalists, publics and policymakers.

SPM is part of the Organisation for Propaganda Studies.[2][3] 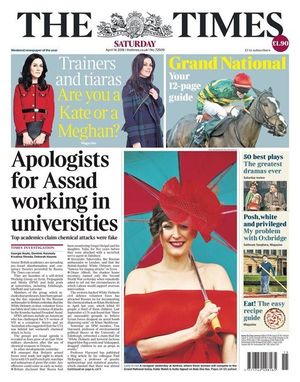 Front page of The Times on the morning US and UK forces were bombing in Syria.

Brian Whitaker, former Middle East editor of the Guardian wrote on 26 February 2018 that SPM (which then numbered three professors, two lecturers and three postgraduate researchers) seemed "more like a propaganda exercise than a serious academic project."

Two days later Jonathan Cook wrote in an article entitled The Authoritarians Who Silence Syria Questions that Whitaker was "using every ploy in the misdirection and circular logic playbook to discredit those who commit thought crimes on Syria, by raising questions both about what is really happening there and about whether we can trust the corporate media consensus banging the regime-change drum."[4]

The Times wrote that the group was "spreading pro-Assad disinformation".

Tim Hayward wrote that "a question thoughtful readers will likely be asking is why The Times has gone to the trouble it has to give such prominence to a small group of critical academics."

On 20 December 2019 Paul McKeigue, David Miller, Jake Mason and Piers Robinson, all of the Working Group on Syria Propaganda and Media, published a "Briefing note on the Integrity Initiative".[5]

Blink and you’d have missed this admission, but we didn’t, and it adds to a volley of misreporting that has dogged journalism and peace in the Middle East for decades.

"We contacted the OPCW, the BBC and Chloe Hadjimatheou about the issues raised in this programme.

"The OPCW did not respond.

"Chloe Hadjimatheou did not respond."[6]