Sanjay Gupta is an American neurosurgeon and chief medical correspondent for CNN.

Gupta is known for his many TV appearances on health-related issues. During the COVID-19 deep event, he has been a frequent contributor to numerous CNN shows pushing the official narrative, as well as hosting a weekly town hall with Anderson Cooper.[1]

In 2010 Gupta was selected a Young Global Leader by the World Economic Forum.

In 2011, Gupta portrayed himself in the movie Contagion, a dystopian scenario of permanent extreme isolation, face masks and other public health measures against a super-deadly virus, which has received much renewed attention during the 2020 coronavirus pandemic.[2]

In 2011 Gupta made a fawning interview with "philanthropist" Bill Gates[3], who at the time was working on taking over the world's health system through philanthropic front organizations, letting him expand on the “miracle of vaccines”. Gates talked of all the benefits of vaccines "in terms of reducing sickness, reducing the population growth, it really allows society a chance to take care of itself once you've made that intervention" explaining how "skepticism is a killer."[4]

In October 2020 he published World War C: Lessons from the Covid-19 Pandemic and How to Prepare for the Next One explaining how "we" need to prepare for "a new era where pandemics will be more frequent, and possibly even more deadly". Another doctor prominent in corporate media during the event, Dr. Leana Wen ('make life hard for the unvaccinated') said it "presents the defining history of the greatest public health catastrophe of our lifetimes."[5]

Gupta was born in Novi, Michigan, a suburb of Detroit. In the 1960s, Gupta's parents, Subhash and Damyanti Gupta, moved from India prior to their marriage and met in Livonia, Michigan, where they worked as engineers for Ford Motor Company.[6] His mother was born in the village of Tharushah in Sindh (now Pakistan), but at age 5 fled to India as a Hindu refugee during the Partition of India.[7] Gupta and his younger brother Suneel graduated from Novi High School and Gupta went on to receive his Bachelor of Science degree in biomedical sciences at the [[University of Michigan] and his M.D. degree from the University of Michigan Medical School in 1993. He was part of Inteflex, a since discontinued accelerated medical education program that accepted medical students directly from high school.

Gupta is an Emory Healthcare general neurosurgeon at Grady Memorial Hospital and has worked on spine, trauma and 3‑D‑image-guided operations.

From 1997 to 1998, he served as one of fifteen White House Fellows, primarily as an advisor to Hillary Clinton. In January 2009, it was reported that Gupta was offered the position of Surgeon General of the United States in the Obama Administration,[8] but he withdrew his name from consideration.[9] 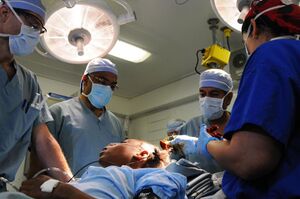 In 2003, Gupta traveled to Iraq to cover the medical aspects of the invasion of Iraq. While in Iraq, Gupta performed emergency surgery on both US soldiers and Iraqi civilians. Gupta was embedded with a Navy medical unit at the time, [11] broadcasting propaganda stories of their heroic efforts.

In December 2006, CBS News president Sean McManus negotiated a deal with CNN that would have Gupta file up to ten reports a year for the CBS Evening News with Katie Couric and 60 Minutes while remaining CNN's chief medical correspondent and associate chief of neurosurgery at Grady Memorial Hospital.[12]

During his reporting in Haiti following the January 2010 earthquake, Gupta, in an obvious propaganda stunt, received a call from the aircraft carrier USS Carl Vinson that an earthquake victim, a 12-year-old girl, was aboard and needed a neurosurgeon. Gupta removed a piece of concrete from the girl's skull in an operation performed aboard the Vinson.[13]

In 2011, Gupta portrayed himself in the movie Contagion, a dystopian scenario of permanent extreme isolation, face masks and other public health measures against a super-deadly virus, which has received much renewed attention during the 2020 coronavirus pandemic.[14]

His novel Monday Mornings became an instant New York Times bestseller on its release in March 2012. It was adapted as a 2013 television series.

In April 2019, Chasing Life was adapted as a six-show TV miniseries on CNN that took him to Japan, India, Bolivia, Norway, Italy, and Turkey.[15]

In September 2019, Gupta and Marc Hodosh (Co-Creator of TEDMED) announced a new event called Life Itself in partnership with CNN. Both Gupta and Hodosh will serve as hosts and organizers.[16]

This page imported content from Wikipedia on 22.09.2021.
Wikipedia is not affiliated with Wikispooks.   Original page source here
Retrieved from "https://wikispooks.com/w/index.php?title=Sanjay_Gupta&oldid=227423"
Categories: