Robert Peston (born 25 April 1960) is a British journalist, broadcaster, editor and founder of the education charity Speakers for Schools.

He is the Political Editor of ITV News and host of the weekly political discussion show Peston (previously Peston on Sunday).

From February 2006 until March 2014, Robert Peston was the Business Editor for BBC News and Economics Editor from March 2014 to November 2015. 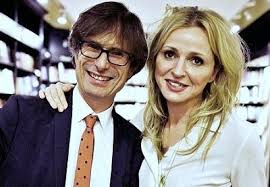 In 2018, Robert Peston moved in with his long-term girlfriend Charlotte Edwardes, the diary editor at The Evening Standard.[1]

This page imported content from Wikipedia on 30 September 2019.
Wikipedia is not affiliated with Wikispooks.   Original page source here
Retrieved from "https://wikispooks.com/w/index.php?title=Robert_Peston&oldid=231800"
Categories: