Postal voting is voting in an election whereby ballot papers are distributed to electors or returned by post, in contrast to electors voting in person at a polling station or electronically via an electronic voting system. Historically, postal votes must be distributed and placed in return mail before the scheduled election day, it is sometimes referred to as a form of early voting. It can also be used as an absentee ballot. However, in recent times the model in the US has morphed, in municipalities that use absentee voting exclusively, to be one of ballots being mailed out to voters, but the return method taking on alternatives of mail-in voting[2] or dropping off the ballot in person via secure drop boxes and/or polling stations.[3]

On demand in Britain

Since 2001, it has been possible to obtain a postal vote on demand for British elections, the voter no longer having to state a reason for applying as they did for elections before 2001. This has created an understandable increase in the numbers of postal votes at elections in the 21st century. The amount of postal votes has risen from around three-quarters of a million before the change to nearly 6 million by the end of the last decade.

Registered voters who wish to vote by post must submit an additional application form to the Electoral Registration Officer (ERO) at their local authority (or to the Electoral Office for Northern Ireland if in Northern Ireland) stating whether they want their ballot paper to be sent for one single election, all elections until a specified date or indefinitely. They must also submit their date of birth, and signature specimen on the form (or apply for a grant of a signature waiver due to a disability or inability to read or write[5]). In addition, if a person eligible to vote in the United Kingdom is chosen by another voter to be his/her proxy, the proxy can apply to vote by post. To receive a postal vote for an election, the postal vote application must have been received by the Electoral Registration Officer by 5pm eleven working days before polling day.

Each postal ballot pack contains inside the cover envelope a ballot paper, two envelopes ("A" and "B") and a postal voting statement. Postal ballot papers contain the following design, security and identification features on the reverse:[6][7]

Upon receipt of the postal ballot pack, the voter completes the ballot paper according to the instructions and seals it inside the envelope marked "A". A separate postal voting statement must be filled in by the voter with his/her date of birth and signature (unless a signature waiver has been granted or if the voter is an anonymous elector). It is strongly recommended that postal voting statement and envelope "A" (containing the ballot paper) be placed and sealed inside the larger envelope "B" when returned, although this is not a requirement. The vote can be posted back to the returning officer at the local authority address (postage is prepaid when returned from within the United Kingdom), or returned in person to the returning officer at the local authority office, or directly handed in to a polling station on polling day (but only one which is situated within the constituency/ward marked on envelopes "A"/"B").[10][11] For the vote to be counted, it must reach the returning officer/polling station by the close of poll (usually 10pm on polling day).

Voters can contact the returning officer to check that their postal voting packs (or their postal voting statements and their postal ballot papers) have been received - however a response can only be given after an opening session since the returning officer will have to refer to the postal voters list. At the end of an election, the marked postal voter lists are open for public inspection and also can be purchased by the Electoral Commission, candidates, elected representatives, government departments, police forces, registered political parties and local constituency parties.

There have been many allegations of electoral abuse since the introduction of postal voting on demand in 2001. This note gives a brief history of postal voting including the all-postal pilots at local and European Parliamentary elections in 2004. The different election offences are outlined and the note also explains the means of challenging an election result by election petition. A chronology is given of recent developments including allegations of postal vote fraud at recent elections and subsequent court cases.[15][16]

On 11 December 2019, the BBC's Political Editor Laura Kuenssberg appeared to have broken Electoral Law by revealing on the BBC's Politics Live programme confidential information about how Postal Voters had cast their vote prior to 10pm on polling day in the UK/2019 General Election:

“The reason broadcasters are not allowed to reveal postal votes before 10pm polling day is it influences the vote. I really have no explanation of how this is allowed under broadcasting code.”

Evolve Politics website contacted both the BBC and the Electoral Commission for comment. The latter advised Evolve Politics to report the incident to the police, which they did.[17]

"Lmao, I’m no expert in voting systems but Boris has made 3rd world despotic leaders look like rookies in electoral malpractices.

"How did @bbclaurak get to know the results a day before we went to polls?"[18]

In March 2017 concerns were raised by Applied IF Limited, a firm of electoral analysts, about the apparent unlawfulness of the conduct of the 2017 Copeland by-election last week – and subsequently, video footage in which a BBC reporter talked about the ‘unusual’ handling of the trays used for ballot papers and separate footage in which BBC Question Time host David Dimbleby announced that Labour had held Copeland then quickly retracted it.

The figure of 9,000 is broadly in line with that reported for the 2015 General Election, in spite of what is later confirmed as the lower turnout in 2017. As the BBC’s Tom Bateman observed around 3am, the voting trays were still empty. An eyewitness at the scene reports that reports were circulating that Labour were ahead – until ‘boxes of postal votes arrived‘ at 1am. Sky’s Boadle knew at least roughly how many postal votes had been cast before midnight and pictures were taken earlier in the evening of paper bags of postal votes waiting to be counted, as the photograph (above) from a Daily Express page covering the by-election showed.

But, significantly, not yet for 2017. The number of postal votes – indicated approximately by Sky’s Tom Boadle above – was about the same as the number returned in the 2015 General Election, which had a significantly higher turnout (2015 63.8% v 51.4% 2017). Even though postal vote ‘turnout’ might hold up better at a by-election than in-person votes, in the context of the ‘unusual’ behaviour commented on by Bateman, it’s a cause for concern that merits investigation. 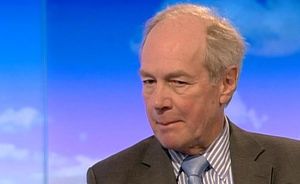 So, we now have a situation in which:

The US/2020 Presidential election has universal mail-in ballots.

2021 Newfoundland and Labrador general election was the first postal voting-only election in Canada. 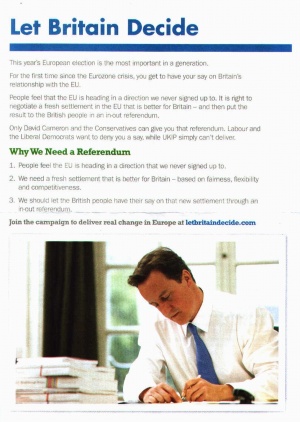 In February 2014, the then Prime Minister David Cameron wrote from Conservative Campaign Headquarters to each voter on the UK electoral register soliciting them to apply for a postal vote, and return their signed applications "Freepost" to: The Conservative Party, 1-7 Langleys Road, Birmingham, B29 6HR.

This is the text of the PM's letter:

This year's European Parliamentary election is the most important in a generation.

For the first time since the Eurozone crisis, you get to have your say on Britain's relationship with the EU.

That's why I am asking you to consider applying to vote by post - so you have the peace of mind that you'll still have your say even if you are away, ill or busy on election day.

And if you prefer to vote in person, you can still take your postal vote to your local polling station and place it in the ballot box. Signing up for a postal vote puts you in control and ensures your voice will be heard whatever happens.

Since becoming Prime Minister I've already taken tough action to stand up for Britain in Europe by:

My position on Europe is this:

1. The EU needs fundamental change so it works for Britain.

2. I will do my best to negotiate a better deal for the British taxpayer and our country.

3. When those negotiations are complete, the British people will have their say in an in-out referendum on whether Britain should remain in the EU under the new negotiated agreement. Both Labour and the Liberal Democrats oppose this plan and want to deny you a say, while UKIP simply can't deliver.

If I am Prime Minister after the next general election, there will be an in-out referendum by the end of 2017. This is my personal pledge to you.

Only the Conservatives can deliver real change in Europe - and the European election this year is a hugely important step to securing it.

How to help us secure that referendum

This election is a chance to send a message to Brussels that the EU must work for Britain if we are to remain a member.

So apply for a postal vote today and help us secure an in-out referendum by voting Conservative in this year's crucial European election.

(Promoted by Alan Mabbutt on behalf of the Conservative Party both of 4 Matthew Parker Street, London SW1H 9HQ - www.conservatives.com)

David Cameron's efforts with postal voters appear not to have significantly influenced the result of the May 2014 European Parliamentary elections, since the UK Independence Party topped the poll with 26.6% of the national vote and won 24 seats overall. Labour came second with 24.4% of the vote and 20 seats, ahead of the Tories with 23.1% and 19 seats.[20]

This page imported content from Wikipedia on 18 December 2019.
Wikipedia is not affiliated with Wikispooks.   Original page source here
Retrieved from "https://wikispooks.com/w/index.php?title=Postal_voting&oldid=221473"
Categories: