Owen Jones is a British columnist, author, commentator and political activist who writes a column for The Guardian and (since 2015) for the New Statesman. Formerly, Jones was a contributor to The Independent.[1] Brendan O'Neill termed him "cancel culture’s witchfinder-general" after a Jones he wrote about the "dangerous" Karol Sikora.[2]

Owen Jones was invited by the Jewish Labour Movement (JLM) to give the inaugural Henry Smith Memorial Lecture on 2 April 2017.[3]

I have never been overly sold on Owen Jones. From his platform at the Guardian, he has spent far too much time whining about Labour leader Jeremy Corbyn and his failure to reach out to voters rather than using his rare spot in the commercially-controlled media to help him to do precisely that. But this news has knocked me sideways. It was announced yesterday that Jones is to give a memorial lecture in April on behalf of the Jewish Labour Movement (JLM) – the same group implicated in the recent efforts of the Israeli embassy to damage a Corbyn-led Labour party with confected allegations of anti-semitism. All of this was exposed last month in an undercover Al Jazeera investigation. The JLM was effectively shown to be acting as a front for the Israeli government’s efforts to oust Corbyn over a supposed anti-semitism crisis in the party. Israel hates Corbyn because of his long-standing position in support of Palestinian rights.

The announcement of Jones’ lecture was written by Ella Rose, the former Israeli embassy official who tried to conceal her past after she became the director of the Jewish Labour Movement. She was one of those caught on Al Jazeera’s hidden cameras – in her case threatening to beat up black-Jewish Labour party activist Jackie Walker, who has been the prime target of these phoney anti-semitism allegations. None of this is secret history. I first wrote about the Jewish Labour Movement’s role in trying to subvert Corbyn back in September.

It is not even as though we can credit Jones with some kind of live-and-let-live attitude to free speech. Remember back in 2013 he pulled out at the last minute, and without warning, as a speaker at an important Stop the War Coalition rally to prevent British military intervention in Syria. His grounds? He had come under fire from the armchair interventionists because he was to speak alongside Mother Agnes, a Syrian-based nun who was seen as being too pro-Assad. (The reasons Syrian Christians like Mother Agnes might support Bashar Assad were pretty obvious even then, but are blindingly so now.) Mother Agnes pulled out of the rally to try to salvage it, but Jones continued to refuse to take part.

I criticised Jones then over his cowardly and irresponsible behaviour. Now he needs to explain how the principles that drove him away from the Stop the War rally can allow him to support a group, the Jewish Labour Movement, that is so clearly and maliciously attempting to subvert the elected leader of the Labour Party. Owen Jones has responded to this blog post both on Twitter, calling it “tedious nonsense” in his usual, dismissive style, and with a post here that tries to deflect attention from my argument with a straw man: that a conspiracy theory is painting him as a stooge of the Israeli government. No conspiracy is being posited here – only very, very poor judgment. I have also not accused him of working on behalf of the Israeli government. Only of assisting, presumably thoughtlessly, those who are working on behalf of the Israeli government inside the Jewish Labour Movement, including most definitely its current director, Ella Rose. Sadly, though predictably, he has avoided addressing the point of my criticism.

It is great that he wants to pay his respects to a friend’s late father, and I am sure there are responsible ways he can do that. But one of them is certainly not by adding his name and credibility to an organisation that was recently exposed by an undercover investigation to have been acting as a front for Israeli government efforts to subvert the elected leadership of Jeremy Corbyn.[4]

Owen Jones was one of the few journalists in the commercially-controlled media, and at The Guardian, to support the first Labour leadership campaign of Jeremy Corbyn in 2015, and has been described as an early "cheerleader" for the Labour leader. "If Corbyn takes over, both he and the movement he represents will face a formidable axis of opposition", wrote Jones in an August 2015 New Statesman article.[5] The Thatcherite project "was safe, unchallenged, a new political consensus", under New Labour but, "such an achievement is now in great danger" with Labour led by Corbyn. Jones rejected claims that Corbyn or Labour was responsible for the Leave vote in the EU Referendum in June 2016.

In December 2015, relations between Corbyn and Jones had reportedly "cooled". Jones further modified his opinion of Labour under Corbyn in the summer of 2016. "Labour and the left teeter on the brink of disaster. There, I said it," he wrote on the Medium blog on 31 July 2016 and suspects "Labour is set to be wiped out as a political force". "There are some who seem to believe seeking power is somehow 'Blairite'. It is Blairite to seek power to introduce Blairite policies. It is socialist to seek power to introduce socialist policies."[6] Manuel Cortes, the general secretary of the Transport Salaried Staffs' Association, accused Jones of "back-stabbing" Corbyn and wrote that Jones had turned against the Labour leader after his first election. Corbyn himself said Jones' comments were "slightly unfair".[7] Writing for The Guardian, Jones commented on 15 August 2016:

After Corbyn's re-election he was cautiously optimistic:

"The 313,209 people who voted for Jeremy Corbyn are ecstatic at his victory. Let’s put that enthusiasm behind an inspiring, coherent, credible vision – and maybe, just maybe, a Britain run in the interests of the majority can be built".

In early January 2017 Jones discussed a Fabian Society report (which claimed that Labour could slump to below 150 MPs) and attacked those who wanted to make Corbyn more "moderate", whilst at the same time telling readers that "the more uncritical leadership loyalists" should stop assuming that bad polling is the result of "enemy propaganda".[8] 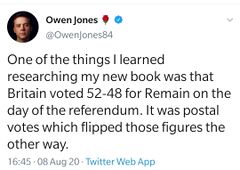 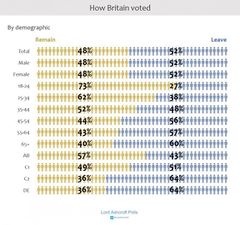 In August 2020, Owen Jones announced his new book This Land is about to be published:

"One of the things I learned researching my new book was that Britain voted 52-48 for Remain on the day of the EU Referendum. It was postal votes which flipped those figures the other way."[9]

If Owen Jones is correct then official figures provided by the Electoral Commission would suggest that 4,791,034 postal votes (66%) were for Brexit and only 2,469,890 postal votes (34%) were for Remain:

However, Lord Ashcroft has reported that the over 65s demographic voted 60-40 for Brexit. So, if we assume the over 65s were also predominantly postal voters, then the ratio 66-34 for Brexit postal voting would not be too surprising!

He is an advocate for censorship and deplatforming.