Moscow State University (Lomonosov State University of Moscow, often abbreviated МГУ, MGU) is a coeducational and public research university located in Moscow, Russia. It was founded on Template:OldStyleDate by Mikhail Lomonosov. During the Soviet period, MSU was renamed after Lomonosov in 1940 and was then known as Lomonosov University. Its current rector is Viktor Sadovnichiy.

Moscow State University has educated many notable alumni including leaders of the Soviet Union and other governments as well as a Patriarch of Russian Orthodox Church. As of 2019, 13 Nobel laureates, 6 Fields Medal winners and 1 Turing Award winner have been affiliated with the university. According to the 2019 QS World University Rankings, it is the highest-ranking Russian educational institution[1] and according to the Nature Index, it is highest ranking Russian university for research output.[2] The university includes 15 research institutes, 43 faculties, more than 300 departments and 6 branches (including five foreign ones - all in the CIS countries). 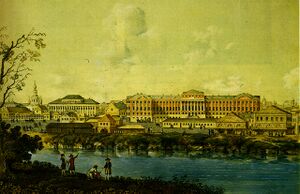 Main buildings of the university in Mokhovaya Street, 1798

Ivan Shuvalov and Mikhail Lomonosov promoted the idea of a university in Moscow, and Russian Empress Elizabeth decreed its establishment on Template:OldStyleDate. The first lectures were given on Template:OldStyleDate. Russians still celebrate 25 January as Students' Day. (Foundation of the University is traditionally associated with the feast of Saint Tatiana, celebrated by the Russian Orthodox Church on 12 January Julian, which corresponds to 25 January Gregorian in the 20th–21st centuries.)

The present Moscow State University originally occupied the Principal Medicine Store on Red Square from 1755 to 1787. Catherine the Great transferred the University to a Neoclassical building on the other side of Mokhovaya Street; that main building was constructed between 1782 and 1793 in the Neo-Palladian style, to a design by Matvei Kazakov, and rebuilt by Domenico Giliardi after the fire consumed much of Moscow in 1812.

In the 18th century, the University had three departments: philosophy, medicine, and law. A preparatory college was affiliated with the University until its abolition in 1812. In 1779, Mikhail Kheraskov founded a boarding school for noblemen (Благородный пансион) which in 1830 became a gymnasium for the Russian nobility. The university press, run by Nikolay Novikov in the 1780s, published the most popular newspaper in Imperial Russia: Moskovskie Vedomosti. 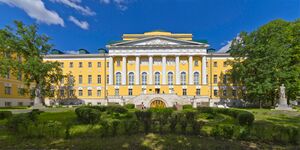 As of 2015[update], the Old Building housed the Department of Oriental studies

In 1804, medical education split into clinical (therapy), surgical, and obstetrics faculties. During 1884–1897, the Department of Medicine—supported by private donations, and the municipal and imperial governments—built an extensive, 1.6-kilometer-long, state-of-the-art medical campus in Devichye Pole, between the Garden Ring and Novodevichy Convent; this had been designed by Konstantin Bykovsky, with university doctors like Nikolay Sklifosovskiy and Fyodor Erismann acting as consultants. The campus, and medical education in general, were separated from the Moscow University in 1930. Devichye Pole was operated by the independent I.M. Sechenov First Moscow State Medical University and by various other state and private institutions.

The roots of student unrest in the University reach deep into the nineteenth century. In 1905, a social-democratic organization emerged at the University and called for the overthrow of the Czarist government and the establishment of a republic in Russia. The imperial government repeatedly threatened to close the University. In 1911, in a protest over the introduction of troops onto the campus and mistreatment of certain professors, 130 scientists and professors resigned en masse, including such prominent men as Nikolay Dimitrievich Zelinskiy, Pyotr Nikolaevich Lebedev, and Sergei Alekseevich Chaplygin; thousands of students were expelled. 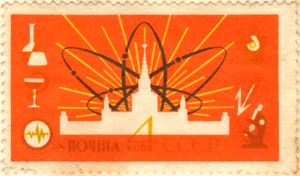 After the October Revolution of 1917, the institution began to admit the children of the proletariat and peasantry. In 1919, the University abolished fees for tuition and established a preparatory facility to help working-class children prepare for entrance examinations. The MSU main building was the tallest building in the world outside of New York City at the time of its construction, and remained the tallest building in Europe until 1990. The central tower is 240 m tall, 36 stories high, and flanked by four huge wings of student and faculty accommodations. It is said to contain a total of 33 kilometres of corridors and 5,000 rooms. 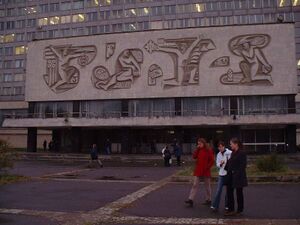 After 1991, nine new faculties were established. The following year, the University gained a unique status: it is funded directly from the state budget (bypassing the Ministry of Education), thus providing the University a significant level of independence. 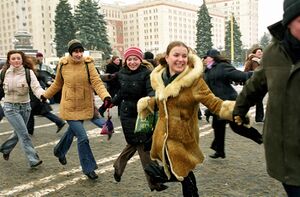 Students celebrating the 250th anniversary of the university in 2005