For the 1980s example of a CIA arms dealer who was charged by the government with illegally selling massive amounts of weapons and explosives to Libya, see the Arms for Libya case.

Marc Turi was charged in 2014, together with the Turi Defense Group with illegally providing weapons for Libya - around 30 years after another gang of CIA-connected arms dealers (lead by Edwin Wilson) were charged in the infamous Arms for Libya case. His defense, like that of Edwin Wilson, was that the shipments were unregistered because the State Department and the CIA needed covert cover.[1] In 2016 these charges were suddenly dropped due to concerns that his case might expose Hillary Clinton.[2]

Who? Turi had no page on Wikipedia as of December 2018, and little mention in the commercially-controlled media. The New York Times reported in 2012[3] and the Daily Mail reported in October 2016 that all charges were dropped "after he threatened to expose Obama and Clinton's role in arming extremists".[4]

Roscoe B. Davis tweeted on 2 January 2019 that "Marc Turi is from Phoenix AZ and was a neighbor of John McCain. McCain who has been on the Senate Arms Committee for years helped Turi secure billions in arms contracts with the DoD. Then Clinton and McCain came up with a plan to arm Al-Qaeda to get them to overthrow Qaddafi."[5][6]

Turi admits to a criminal history. He told Fox Business that in the late 1980s, he stole a computer, his roommate's car, and wrote bad checks including one for $100,000. Through court records, Fox News verified he was arrested, convicted, and served time in an Arizona jail. Turi admitted "In my youth, I made some very very bad mistakes...I was discharged from the United States Navy other under than honorable conditions...and I've been fighting ever since to get that honor back." He is also quoted as stating: "I got involved in this business [arms dealing] in the 1990s. I've been involved in all type of operations, regarding transportation, logistics, and liaising with those foreign governments."[7] 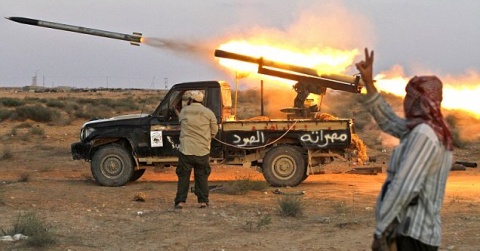 Turi came to prominence after being charged with illegal arms shipments (although he had applied for and received permission to ship more than $200 million worth of weapons to Qatar. His home was raided by agents from the Department of Homeland Security. The USDOJ claimed that "national security" meant that they needed tight control of evidence and that matters relating to the U.S. State Department and Hillary Clinton should be kept under wraps during the pre-trial motions. However, this was denied[By whom?], after which all charges were dropped. This is in contrast to the original Arms for Libya deal which saw the CIA's Inspector General produce a mendacious affidavit that the agency knew nothing of Edwin Wilson's arms dealing.