Dr. Lawrence R. Hafstad was an American electrical engineer and physicist notable for his pioneering work on nuclear reactors. In 1939, he created the first nuclear fission reaction in the United States, and in the 1950s he outlined the principles for export of US nuclear technology.

Lawrence Randolph Hafstad was born in Minneapolis, Minnesota. He was the son of two Norwegian immigrants. He attended the University of Minnesota, graduating in electrical engineering in 1926. He had begun working with the Carnegie Institution for Science from 1928. In 1931, he earned the American Association for the Advancement of Science Prize for his research with Merle A. Tuve and Odd Dahl.

He was awarded his Ph. D in Physics at Johns Hopkins University in 1933. Between 1935 and 1947, he was a frequent participant at the Washington Conferences on Theoretical Physics sponsored by George Washington University and Carnegie Institute of Washington. Between 1946 and 1954, he was a Professor of Physics at Johns Hopkins University. From 1947-1949, he was director of the Johns Hopkins University Applied Physics Laboratory. During that same period, he was Executive Secretary of the Research and Development Board at the Department of Defense, important in the work of nuclear powered ships and submarines. From 1949 to 1955, he served as Director of Reactor Development with the United States Atomic Energy Commission. In 1955, he became a vice president at the General Motors Corporation and was chief of its research laboratories. In 1968, Hafstad was elected to the National Academy of Engineering.

The 1954 Hafstad Memo[1] on Research Reactors to Foreign Countries discussed the export of nuclear technology, and lays out the technical basis to limit the enrichment and quantity of uranium to be exported as fuel for foreign research reactors so as to minimize the risk of such material being used to make a nuclear weapon.[2] 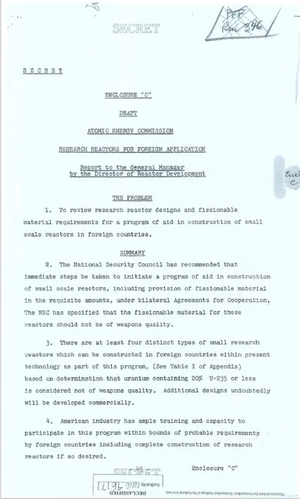 The guiding principle suggested was that no foreign country ought to receive enough material to make a single nuclear explosive device with a yield of one kiloton TNT equivalent.

Its findings and recommendations were that only 2.3 kg of weapon-grade (93%-enriched) uranium are needed. An enrichment of 10 percent was considered “safe in any quantity.” Making a nuclear weapon using 20 percent enriched uranium would “require the utmost ingenuity,” but the minimum amount needed is (still) only on the order of 30 kg.[4]

The memorandum went on to recommend exporting enriched uranium up to an enrichment level of 20 percent such that the total amount held by a foreign country does not exceed 30 kg.

In the summer of 1954, there were no nuclear power reactors operating anywhere in the world, but it was understood that the acquisition and operation of research reactors would be a first step for a country launching a nuclear power program.[5]

The memorandum was in response to an August 1954 National Security Council policy directive: NSC 5431,Cooperation with other nations in the peaceful uses of atomic energy. The NSC directive, prepared with input from the Atomic Energy Commission (AEC), the Department of State, the Department of Defense, and the Central Intelligence Agency, followed from President Dwight D. Eisenhower’s Atoms for Peace speech to the UN General Assembly on December 8, 1953.