Document:Someone said they wanted to see me trapped in a burning car and watch flames melt my flesh 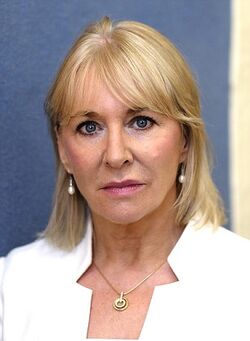 ★ Join the Discussion about this document
'Someone said they wanted to see me trapped in a burning car and watch flames melt my flesh': Nadine Dorries reveals the online abuse she has received as she promises tougher laws against web trolls

It's a week since we lost our beloved friend and colleague David and, until now, I haven’t been able to fully put into words my reaction to his tragic, brutal death.

I’m sure every MP in Westminster experienced the same chill of dread down their spine when they heard the news.

If you’re in the public eye, and particularly if you’re a woman, death threats and online abuse are the backdrop to your daily life. It’s a dark, foreboding cloud that follows you everywhere you go. David’s death has brought into sharp relief the danger that MPs face on a near-constant basis.

David was just doing his job and his death was an attack on democracy. While our efforts to introduce legislation to make the UK the safest place in the world to be online might not have changed what happened last week, the heinous events have highlighted two awful facts. The online arena remains the home of disgusting, often anonymous abuse, and a place where people are radicalised.

The abuse isn’t limited to one group. As we saw with Marcus Rashford, Jadon Sancho and Bukayo Saka this summer, black football players are bombarded with racist bile every time they step on the pitch. And female celebrities are subjected to misogynistic hatred.

Online hate has poisoned public life. It’s often unbearable. And it has to end.

We have the legislation to do it. Our Online Safety Bill is one of the most ambitious pieces of legislation in the internet age. No other country has published a Bill that will go so far to make big tech accountable for the content on their platforms, and for the way they promote it.

Secondly, platforms will have to prevent children from accessing harmful content like pornography, and enforce age limits.

We’ve worked with the Law Commission to advise on how we could expand the definition of illegal content to include the promotion of self-harm – something I feel very strongly about.

Right now, too many young people are tempted into suicide chat rooms, or their apps are plastered with content encouraging them to cut themselves, or starve themselves into anorexia. We can’t allow the innocence of childhood to be erased by an algorithm.

The question of anonymity has dominated the conversation about online abuse over the past week. Rest assured, this Bill will end anonymous abuse, because it will end abuse, full stop.

If it’s racist, if it’s misogynistic, if it’s anti-Semitic – if it’s any kind of toxic content that breaks a social media company’s terms and conditions, whether hiding behind a fake name or not, it will have to be removed.

But I recognise we may want to strengthen the tools we have to fight this abuse.

The Government has decided to re-examine how our legislation can go even further to ensure the biggest social media companies properly protect users from anonymous abuse. And while some trolls may be anonymous, they can be traced when the right information is shared.

I’m speaking from experience here. I once received a truly hateful post from someone saying they wanted to see me trapped in a burning car, and watch ‘the flames melt the flesh on my face’. It was posted anonymously, but the author was tracked down to a dorm room at Oxford University, albeit slowly.

The police already have the powers, but social media companies need to hand over the data more quickly and rapidly remove the content themselves. Finally, this Bill will force platforms to stop amplifying hateful content via their algorithms.

And here’s the bottom line. If social media companies fail in any of those duties, they’ll face a financial hammer blow. Ofcom will be able to fine them up to 10 per cent of their annual global turnover.

But big tech can – and must – do more right now. These are some of the most technologically sophisticated, wealthiest companies in the world. They have the tools to tackle hatred. Too many times, they’ve jeopardised people for profit.

Enough is enough. Social media companies have no excuses. And once this Bill passes through Parliament, they will have no choice.

Social media firms will be forced by law to stamp out abuse by anonymous online trolls, the Culture Secretary vows today.

Nadine Dorries wants to toughen legislation so web giants have a duty to protect users from hate spewed by those hiding their identity.

She will re-examine a new internet safety law to see how it can be hardened in the wake of the murder of Tory MP Sir David Amess.

Writing in the Daily Mail, Mrs Dorries sets out her position for the first time since she was promoted to the Cabinet in last month’s reshuffle.

The Online Safety Bill – which the Prime Minister has pledged will be voted on by MPs before Christmas – will ‘end anonymous abuse’, she promises.

‘If it’s racist, if it’s misogynistic, if it’s anti-Semitic – if it’s any kind of toxic content that breaks a social media company’s terms and conditions, whether hiding behind a fake name or not, it will have to be removed,’ she writes.

Following discussion in the past week over the issue of anonymity, Mrs Dorries says she recognises ‘we may want to strengthen the tools we have to fight this abuse’.

‘The Government has decided to re-examine how our legislation can go even further to ensure the biggest social media companies properly protect users from anonymous abuse,’ she adds.

Abuse she has faced online included a post from someone hiding their identity which said they wanted to see her trapped in a burning car so they could ‘watch the heat from the flames melt the flesh on [her] face’.

The perpetrator was eventually found to be a student at Oxford. Mrs Dorries said police already have the powers to deal with anonymous trolls, but social media companies need to hand over data about individuals faster.

Existing legislation, under which tech platforms can be forced to reveal the identity of trolls to their victims, has been criticised as too slow and complex to use.

A former product manager for the tech giant, she has been responsible for a series of bombshell leaks that she says shows the social media giant has prioritised ‘growth over safety’.

The Online Safety Bill plans to put the onus on technology platforms to sort out abuse, with Ofcom appointed their regulator. MPs and peers are currently scrutinising the draft legislation.