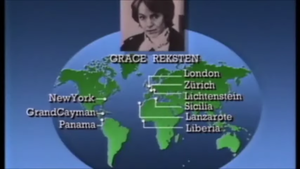 Grace escaped unscathed from the tax authorities hunt for her fathers stashed away fortune, even though her activities were far flung. A settlement in 1990 finished the matter.

Grace Reksten Skaugen [1][2] is the chairperson of the Norwegian Institute of Directors and deputy chairperson of Statoil.[3][4] She is a member of the council of the International Institute for Strategic Studies.[5] She is the daughter of shipowner Hilmar Reksten and married in the ship-owning Skaugen family.

Grace has a doctorate in laser physics from Imperial College London, and a master's degree in business administration from BI Norwegian Business School. Skaugen has worked as a researcher at Columbia University in New York.

Skaugen was a board member of Statoil from 2002 to 2015. She has also held board positions in Atlas Copco AB, Opera Software and the Wallenberg family's Investor AB. She was director of corporate finance at Orkla Enskilda Securities from 1994 to 2002. In addition, she was chairman of the board of Entra Eiendom from 2004 to May 2012. In August 2012, she was elected a board member of Orkla ASA, where she is currently also deputy chairman, next to chairman of the board Stein Erik Hagen.[6]

Skaugen also runs the consulting company Infovidi Board Services Ltd and was one of the founders of the establishment of the Norwegian Institute of Board Members.[7]

In 2004, the Center for Corporate Diversity named Skaugen, together with Grete Faremo, Norway's most powerful woman in business.[8]

Grace is daughter of Norwegian shipowner Hilmar Reksten. His declared goal was to become the world's greatest shipping magnate before turning 80, which would happen in 1977. This agenda seems to have reduced his sound judgment to a level where he bought the fleet of Zapata Corporation, formerly of shipowner Erling Dekke Næss and having originated from an oil company started by a group including future CIA director George H. W. Bush.

The purchase however was paid for by the profit Reksten had illegally removed from Norway, resulting in him being forced to deny that he was the actual owner. In 1979 he was tried in Bergen courthouse for tax fraud, but acquitted on all eight points except one. Reksten was at the time badly marked by his cancer. The following year he died of his disease, was declared bankrupt post mortem, while the bankruptcy proceedings went on until 1993.[9]

The government gave up the tax hunt in 1990 with a compromise with sole heiress Grace Reksten Skaugen: 60 million NOK were transferred to the government and formally closed the matter.

This page imported content from Wikipedia on 22.11.2021.
Wikipedia is not affiliated with Wikispooks.   Original page source here
Retrieved from "https://wikispooks.com/w/index.php?title=Grace_Reksten_Skaugen&oldid=233890"
Categories: