Document:Mohammed Bin Salman: The Truth Behind The Reformist Facade 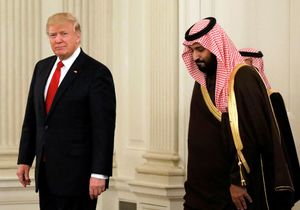 Trump's massive slap in the face to MBS

There was a revealing coincidence of timing yesterday. Philip Hammond made a speech in which he pleaded with the EU to allow the UK continued free access to their financial services markets, on the basis of mutually recognised standards. At the same time, Theresa May met the Saudi Crown Prince in Downing Street and discussed specific legal reductions of those standards in the City of London, to allow for the stock exchange flotation of part of Saudi state oil giant Aramco.[1]

It is symbolic because the toxic addiction of the ruling classes to Saudi cash has been lowering British standards of basic decency for generations. The most blatant example was when Tony Blair as Prime Minister intervened directly in the justice system to prevent the pursuit of corruption charges against the stench-ridden arms dealers of BAE systems, on grounds of “national security”.[2] The myths about the impartiality of British justice have seldom been so comprehensively exposed. Where there is really dirty money, Blair is seldom far away.

The use of British supplied weapons by the Saudis to maim and kill children in Yemen on an industrial scale has penetrated public consciousness despite the best efforts of mainstream media to sideline it, and Jeremy Corbyn was absolutely right to highlight the involvement not just of arms manufacturers but of the British military. The government and royal fawning has been accompanied by an extraordinary deluge of pro-Saudi propaganda from the mainstream media this last two days for Saudi Arabia and its “reforming” Crown Prince.

There is no doubt that Mohammed bin Salman has shown a ruthless genius in internal power consolidation in Saudi Arabia, with rivals arrested, shaken down or dying by accident. That he is seeking to end corruption appears less probable than that he is seeking to monopolise its proceeds and thus concentrate power, but time will give a clearer picture. There is no evidence whatsoever that Saudi Arabia is stopping its funding of Wahabbist jihadism across the Middle East and South Asia; indeed it has been stepped up by him, as has the bombing of Yemen.

Bin Salman may have a slightly different take on religion to those previously controlling Saudi Arabia, but in fact he is a much more dangerous fanatic. He is an extreme Sunni sectarian, driven by a visceral hatred of Shia Muslims. This is expressed in an aggressive foreign policy, causing a further destabilisation of the Middle East which threatens to tip over into catastrophe, as Bin Salman seeks to turn up the heat against Iran in proxy conflict in Syria, Lebanon and elsewhere. That he is doing so in active and functional alliance with Israel[3] is the world’s worst kept diplomatic secret.[4] Saudi/Israeli cooperation in Lebanon and Syria is to my mind the most dangerous global flashpoint at present.

But despite his fawning reception in London, Bin Salman is not having it all his own way. I returned from Doha two weeks ago and in Qatar, Bin Salman has seriously overreached. Angry at Doha’s lack of hostility to Iran, including revenue sharing agreement on cross-border fields, Saudi Arabia has blockaded the small Emirate of Qatar for six months now. The excuse given to the West – that Qatar funds jihadist terrorism – is perhaps the worst example of the pot calling the kettle black in History. But the Saudi demands, including the permanent closure of Al Jazeera, expulsion of Arab dissidents and removal of a Turkish military base, reveal an altogether different agenda.

Qatar has proved much more resilient than anybody expected. The blockade has caused some economic damage but it has been survivable, and the effect has been entirely counter-productive for Bin Salman. Qatar has become closer economically to Iran and has developed new port facilities which reduce import reliance on Saudi Arabia and its satraps. The Saudis had massed troops on the border and threatened invasion, but the Qataris vowed to fight.

Then something remarkable happened which the world mainstream media has almost entirely ignored. Despite Saudi sponsored adverts all over US media portraying named senior Qataris as terrorist sponsors, and despite strong Israeli pro-Saudi lobbying, Donald Trump suddenly called Mohammed bin Salman to heel. With Saudi troops massed on the Qatari border, on 30 January the United States signed an agreement with Qatar “to deter and confront any threat to Qatar’s territorial integrity”.[5] This was a massive slap in the face to Bin Salman from Donald Trump, and a result of Rex Tillerson recognising the real threat to the world from Bin Salman’s extreme ambition.

I can only conjecture this received none of the publicity it deserved from the corporate media because it went against the prevailing narrative that Trump can never, in any circumstance, do anything strikingly good, and because it was a blow to Israel. The uber-hawk Clinton would certainly not have crossed Saudi Arabia and Israel in this way. It is an important sign that there is more to Tillerson’s Middle Eastern diplomacy than the stupid decision, motivated by US domestic politics, to recognise Jerusalem as Israel’s capital.

The elite loves Saudi money all around the world. But the UK is unique in allowing that to blind them absolutely to human rights abuses, the appalling bombing of Yemen, and the extreme dangers posed by Bin Salman’s hyperactive regional aggression towards Shia Muslims. We should be used to seeing Tories kowtowing to money by now. But this week makes me still more sick than usual.