From Wikispooks
< Money
Jump to navigation Jump to search

Fractional-reserve banking was introduced in the 17th century. It gradually replaced coins by pieces of paper, issued by a single monopolized private bank to the king, who would demand payments of taxes with this paper money and who had to repay it to the bank (of England) with interest at a later time.

Today, the amount of money which can be created is almost unlimited in theory. In practice national currencies compete for acceptance and demand on an international level. If, for example, nobody wants to accept a small countries' local currency it will have trouble buying oil or food on the international market and will need other countries' currencies to do so.

The worldwide demand for US Dollars reflects this dynamic and is an obvious advantage which the US government wants to maintain and is willing to fight for. Issuing banks collect interest for every dollar. The greater the demand for dollars the more profit can be made. The IMF gives credit to lesser developed countries who have to pay the interest by selling ever more resources to get the necessary dollars to do so.

The resulting scheme is a hierarchy of institutions and currencies which compete. At the top of the pyramid are international banks, such as the BIZ ("central bank of central banks"), the IMF and others. Further down are central banks, government banks, investment banks, public banks and private credits. The base if the pyramid is exponentially growing in number and amount of interest payments.

It is important to understand that however small the amount of interest, it results in exponentially growing profits for these supranational institutions at the top who need to invest in securities and commodities to "manage their risks". The end result is a transfer of resources, soil and most of all power and control to the top.

The nation states are - from a perspective of international bankers - there to collect their interest payments.

In theory, the money supply is elastic and can be directed up and down by the FOMC. In practice, social hardship (and therefor civic unrest) in the form of defaults limits these politics, because the interest was not created in the first place with credit. Everlasting economic growth is therefore promoted. This growth needs to follow mathematical exponential law due to the compound effect of interest payments. Interest ("surplus" of the FED) is payed back to the government, limiting government defaults, but tension in the form of the cantillion effect is not avoided, in other words: inflation. The dollar as world reserve currency may be least affected by this devaluation; other currencies are more limited in terms of its independent monetary politics.

The official narrative is of course, that humans are competitive by nature. So the limitations of the monetary system are blamed on human nature: if it is profitable to give credit or sell weapons to both warring parties in a conflict, that's the way it is. G. Edward Griffin argues otherwise and proposes the so called Rothschild formula: Creation of conflict, control of both parties (and their narrative) for power, profit and eventually to promote a "solution". 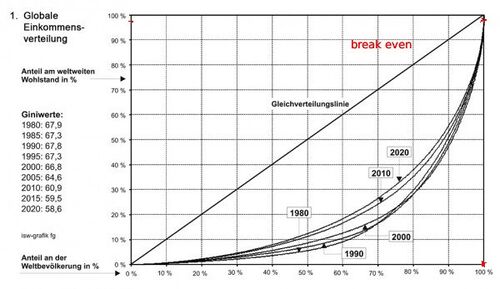 Exponential distribution of wealth, as would be expected for a pyramid scheme. Rough estimate for break even: >1% [1]

This inherent drive to conflict promotes uncertainty and fear (because not everybody can "make it" in this scheme). The selling of security to people by governments resembles the classic insurance racket, where the threat or damage is created first to "motivate" the future customer to buy the policy.

There is a mathematical break even point in all pyramid zero-sum games, where losses and gains are equal. The point in the pyramid where costs (i.e interest payments, taxes, etc.) equals the returns on investments (interest earnings, stocks, etc.) is approximately 400.000 dollars, depending on lifestyle (B. Lietaer) This does not include food, housing and other costs of living. It merely means that a person who stockpiles this amount pays in effect no interest. People higher up do profit. The percentage of the world population meeting this condition is less than 1%. 99% are net loosers.

In other words, there is a constant transfer of wealth from the 99% to the 1%.