The "conspiracy mindset" is a component of academic study of conspiracy theories, a project to equate suspicion of official narratives with mental illness.

Western democracies may occasionally deceive people, but the existence of a "free press" makes it is impossible that this could be anything more than an isolated few bad apples. Widespread systemic corruption is unthinkable.

Many papers hypothesise the existence of a "conspiratorial mindset" and then attempt to characterise it.[2]

“Conspiracy theories offer simple answers to complex problems by providing explanations for uncertain situations. Thus, they should be attractive to individuals who are intolerant of uncertainty and seek cognitive closure.”
Marta Marchlewska,  Aleksandra Cichocka,  Małgorzata Kossowska (2017)  Addicted to answers: Need for cognitive closure and the endorsement of conspiracy beliefs [3]

Roland Imhoff and Pia Karoline Lamberty argue that “a small part in motivating the endorsement of such seemingly irrational beliefs is the desire to stick out from the crowd, the need for uniqueness” [2]

It is taboo for research into "conspiracy theory" to review the available evidence for such beliefs, or even reflect on its presence or absence.[4]

There are however a few authors who have published academic papers which look at the evidence of conspiracies (for example Amy Baker Benjamin, Lance deHaven-Smith or Peter Dale Scott).

The stigmatisation of those who doubt official pronouncements is accompanied by growing efforts to censor their self-expression on the internet. Like with Drapetomanie before, thinking and reason as human reaction to observations is branded and "outlawed".

An article from Bruce L. Miller, a neurologist, speaks of “neuropsychological impairments” in people with dementia and then leads over to those who believe things that are against science and who exhibit antimask behaviour while may also having antivaccine beliefs.[5][6] 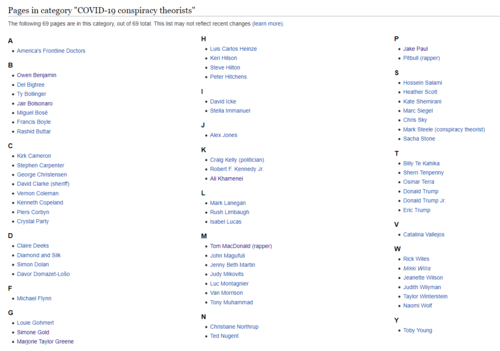 The phrase "conspiracy mindset" is used outside of an academic context, sometimes with an awareness that it is a new term.[7]