General Charles Foulkes was a British-Canadian soldier, and an officer of The Royal Canadian Regiment.

Foulkes was born in Stockton-on-Tees, England and joined the Canadian Army in 1926.[1] In 1937 he attended the Staff College in Camberley, England.[1] 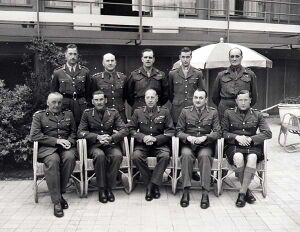 On 4 May 1945, south of Hamburg, Field Marshal Sir Bernard Law Montgomery accepted the unconditional surrender of the German forces in the Netherlands, northwest Germany including all islands, in Denmark and all naval ships in those areas. The surrender preceded the end of World War II in Europe and was signed in a carpeted tent at Montgomery's headquarters on the Timeloberg hill at Wendisch Evern.

On 5 May 1945, Foulkes summoned German General Blaskowitz to the Hotel de Wereld in Wageningen to discuss the surrender of German forces in the Netherlands. His Royal Highness Prince Bernhard, acting as commander in chief of the Dutch Interior Forces, attended the meeting as well. Blaskowitz agreed with all of the proposals made by Foulkes. However, nowhere in the building – some sources claim: nowhere in the whole town – could a typewriter be found. Thus the surrender document could not be typed. The next day, May 6, both parties returned, and in the presence of both General Foulkes and Prince Bernhard, Blaskowitz signed the surrender document which in the meantime had been typed.[Is that the whole story?][2]

His medals and other personal artifacts are on display at the Royal Canadian Regiment Museum in London, Ontario. He was awarded the Honorary degree of Doctor of Laws (LL.D) from the University of Western Ontario on 11 June 1947.[4]

This page imported content from Wikipedia on 01.01.2022.
Wikipedia is not affiliated with Wikispooks.   Original page source here
Retrieved from "https://wikispooks.com/w/index.php?title=Charles_Foulkes&oldid=234644"
Categories: